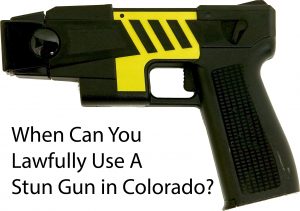 Introduction – the Confusing State of Colorado Law on Stun Guns

The use of stun guns and Tasers in Colorado may present as confusing to those intending to use the weapon in self-defense.  This brief article is intended to clarify the state of the law for those considering arming themselves with this significant weapon.

First: What Exactly IS a Stun Gun?

Stun guns and tasers deliver a high-voltage electrical shock. They cause an experience of the temporary loss of muscle control and are intended to provide time to escape. The difference between the two is in their effective range of use.

The “contact points” of a stun gun are at the end of the device and it requires the user to be close enough to the threat to be able to place the contacts of the stun gun directly onto that person’s body to be effective. These are powerful weapons and can deliver between 100,000 to 4.5 million volts of electricity.

Tasers, on the other hand, “expel” electrodes (small darts or probes attached to thin, flexible wires) up to a distance up to 15 feet. Close physical contact is not required. The electric pulses that pass through the attacker can deliver multiple bursts of electricity that disrupt the human neuromuscular system. Tasers can deliver up to 50,000 volts of electricity.

Second: Colorado Law Regulates the Use of a Stun Gun

Stun guns and tasers are not defined as firearms under Colorado law. No permit is required to legally own a stun gun.

a device capable of temporarily immobilizing a person by the infliction of an electrical charge.

A person commits the illegal use of a stun gun – a class 5 felony – if:

he or she knowingly and unlawfully
uses a stun gun
in the commission of a criminal offense.

Importantly, the terms “uses” and the term “criminal offense” in the statute are not defined, and because the penalty for violating the law is severe, understanding when and how one may use a stun gun is critical.

Unlawfully using a stun gun in Colorado is a class 5 felony in Colorado the possible punishment for the illegal use of a stun gun from one to three years in prison with a mandatory two years of parole and up to a fine from $1,000.00 to $ 100,000.00. 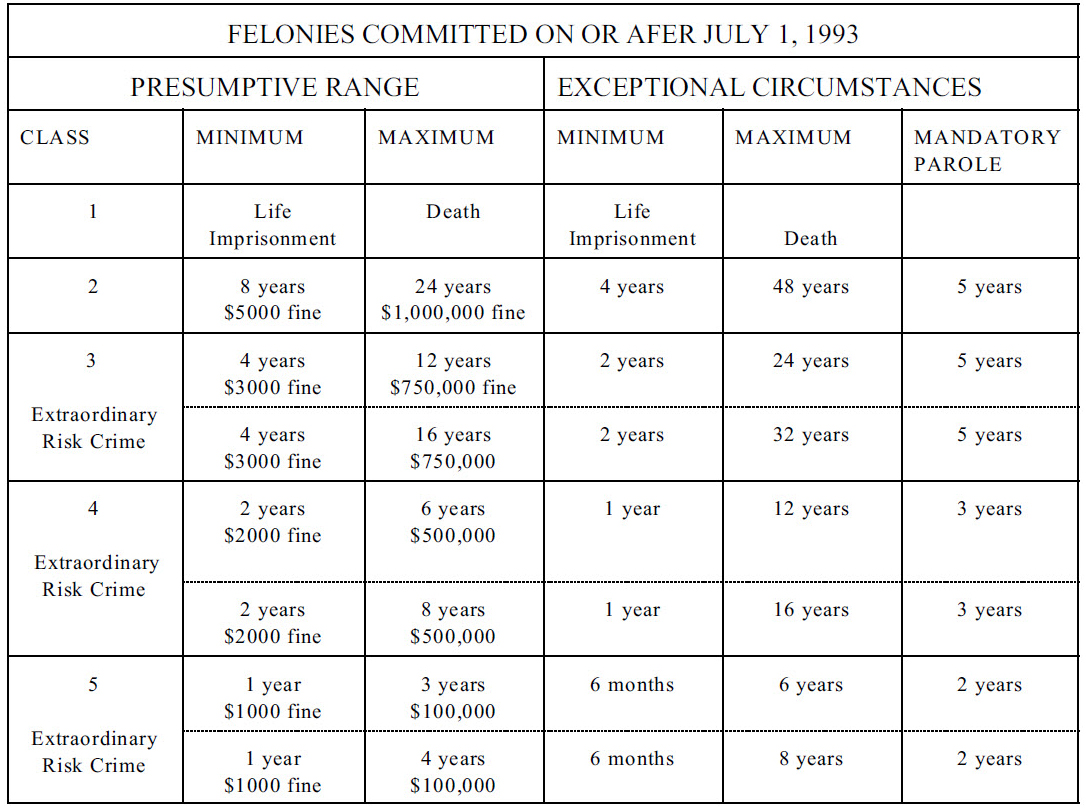 What Does the Term “Uses” Mean as Used in the Colorado Stun Gun Law?

In a recent Colorado case, the term “uses” was defined in a jury instruction at trial as follows:s

“USED” as mentioned in these instructions, does not mean that the stun gun had to be physically applied to the person of another.

When a law does not supply an internal statutory definition it is first left to the trial court to attempt to define the term. Later, if there is an appeal in the case, it is not unusual for the Colorado Court of Appeals to try to help flush out the meaning of that undefined phrase.

The term “use” has multiple dictionary definitions, including: “something that fills a need or gives a benefit or advantage”; “to observe or follow a custom”; “to make familiar by repeated or continued practice or experience”; and “to put into action or service.”

Thus, the statute could reasonably be interpreted as prohibiting, in the commission of a crime, (1) only discharge of a stun gun (“put into action”), or (2) threatening display of a stun gun (“gives a benefit or advantage”) as well.

“Uses” in this context means,

The term “uses” does NOT, require the stun gun to be discharged. It includes the threatened use of the weapon. 18-12-106.5 creates a separate crime whenever a stun gun facilitates the commission of the predicate offense, whether or not it is discharged.

Similar to other Colorado crimes the phrase “uses” “in the commission of a criminal offense” is interpreted as applying to “any (predicate) crime.”

Examples of the broad application of the term “use or uses” with reference to other crimes include:

Section 18-3-206(1)(a), Felony Menacing which provides that menacing is a felony if committed “[b]y use of a deadly weapon.”

What Does the Phrase “ in the Commission of a Criminal Offense” Mean in the Colorado Stun Gun Law?

Because using a stun gun in Colorado is ONLY illegal if you use it to commit a criminal offense, a successful defense to Colorado stun gun charges establishes that the use of the stun gun did not result in the commission of what is called a “predicate offense.”

If a crime is “predicated” on something else, it is based on that thing and can only occur because of that thing. There can be no felony stun gun crime unless the stun gun is used to commit a completely separate crime.

Example: Charged with Using a Stun Gun to Commit an Assault

If a person uses a stun gun in the alleged commission of an alleged assault, (the most common charge), the defense may be able to establish through a close examination of the existing evidence or through an independent investigation, that the use of the stun gun was an act of self-defense.

Self-defense is a perfect defense to the crime of assault. No assault means there can be no crime as there is no predicate offense.

Does the Second Amendment Include a Stun Gun?

More specifically, Massachusetts argued they were not only not in common use at the time of the Second Amendment’s enactment they were “dangerous per se” at common law, unusual, and not “readily adaptable to use in the military.”

The Caetano Court held, as the Supreme Court (as it has had held in a previous case – the Heller case below), that the Second Amendment may be applied to weapons that weren’t in existence in the 18th century.

In District of Columbia v. Heller, 554 U.S. 570 (2008), the United States Supreme Court held that the Second Amendment’s protection of “the right of the people to keep and bear arms . . . confers an individual right to possess and carry weapons.”

While not holding that stun guns came under the specific protections of the Second Amendment, the Court did find that a complete ban on the weapon as was the case in Massachusett, was unconstitutional.

Three years later, in 2019, the Illinois Supreme Court went the extra mile and not only held that Illinois’s complete ban on stun guns and Tasers was unlawful, the ban, specifically violated Second Amendment protections. See People v. Webb, 131 N.E.3d 93 (Ill. Sup. Ct. 2019 – the protection “extends . . . to . . . arms . . . that were not in existence at the time of the founding.”

There is no question that you can legally own and use a stun gun in self-defense in Colorado. However, like all other weapons, stun guns cannot be used in the commission of a crime, any crime.

The use of a stun gun, either discharged or used in another way, to commit even the simplest criminal act in Colorado means the possibility of being charged with a class 5 felony.