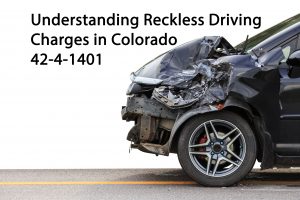 Introduction – A Reckless Driving Conviction Can Impact Your Life

There is an important line that is crossed when a Colorado police writes you a summons for reckless driving rather than the lesser charge of careless driving.

For example, depending on the number of points you may already have on your driver’s license, careless driving, with a point penalty of 4 points, and reckless driving at 8 points, may lead to the loss of your right to drive. Without the ability to drive in Colorado tasks, such as driving to work, shopping for groceries, or going to a doctor become more difficult or, in some cases, impossible.

The impact of higher insurance rates also may be felt for many years following a conviction for reckless driving. Even if the case does not lead to a license suspension, a conviction for careless or reckless driving, especially if there is a serious accident, can have long-term financial, physical, and even an impact on your mental health impact over the course of your life in the form of post-traumatic stress.

The Elements and Penalties for Reckless Driving

Reckless driving is defined under Colorado law Section 42-4-1401 as follows:

“A person who drives a motor vehicle, bicycle, electrical assisted bicycle, or low-power scooter in such a manner as to indicate either a wanton or a willful disregard for the safety of persons or property is guilty of reckless driving.”

Eight points are assessed against your driver’s license for a first offense.

Reckless driving conviction is a habitual traffic offender “strike.” Colorado law provides that if you are convicted of three major traffic offenses (8 points and above) in a seven-year period, your driver’s license is suspended for five years.

Subsequent convictions for the crime of reckless driving can result in even more severe penalties: from 10 days to 6 months in jail, and/or up-to $1,000.00 in fines.

The Elements and Penalties for Careless Driving

Careless driving is defined under Colorado law Section 42-4-1401 as operating:

“a motor vehicle, bicycle, electrical assisted bicycle, or low-powered scooter in a careless and imprudent manner, without due regard for the width, grade, curves, corners, traffic, and use of the streets and highways and all other circumstances.”

Four points are assessed against your driver’s license. Importantly, a careless driving conviction is NOT a habitual traffic offender “strike.”

However, if careless driving results in bodily injury or death, then careless driving escalates to a class 1 misdemeanor and the penalties increase 10 days to 12 months in jail and/or fines of $300.00 to $1,000.00.

Examining the relevant culpable mental states that distinguish reckless driving from careless driving is instructive at this point.

A person acts recklessly when he or she consciously disregards a substantial and unjustifiable risk that a result will occur or that a circumstance exists.” 18-1-501(8) C.R.S.

A person acts with criminal negligence when, through a gross deviation from the standard of care that a reasonable person would exercise, he or she fails to perceive a substantial and unjustifiable risk that a result will occur or that a circumstance exists.” § 18-1-501(3) C.R.S.

Criminal negligence is a lower culpable mental state than recklessness.

If the state proves that a defendant acted recklessly they necessarily establish that he or she acted with the lesser mental state of criminal negligence. That means that careless driving is a “lesser included offense” of reckless driving because “the greater degree of negligence includes the lesser”.

In a recent example of a case of reckless driving. the defendant was driving 73 m.p.h. when the applicable speed limit was 55 m.p.h.. An accident resulted based on the defendant’s inability to stop at a stop sign. The collision was at 62.8 m.p.h. and serious injuries to both drivers were the result.

The Colorado Court of Appeals held that the quantum of evidence in the case was sufficient to prove the culpable mental state required for reckless driving.

This is a complex area of Colorado law that bears a closer look.

Reckless driving, while not rising to the level of an intentional act, requires a clear comprehension of the risks involved while driving and the conscious and willful decision to disregard that risk that acts to enhance the danger to the safety of others. Reckless driving does not require harm to someone another to be charged with and convicted of the crime.

Put differently, recklessness requires a defendant to be aware of the risks present at the time of driving and decide to disregard those risks. It is a conscious choice to do something that is clearly dangerous.

Careless driving is driving “without due regard to the risks” but does not rise to consciously disregarding those risks. Reckless drivers know they are a danger to others and choose to ignore that danger. Careless drivers fail to understand the risks they pose.

Because the act of reckless driving is really a subjective determination of the police officer or officers involved, it is ultimately a question of fact for a jury. Because it is so very subjective there is sometimes no path to an agreement between the parties in terms of a plea bargain. Identifying what is, and what is not, reckless driving in Colorado then becomes a matter of evidence at trial.

Examples of reckless driving include:

Road Rage: Two or more vehicles engage in aggressive driving at excessive speeds with one another and put all others on the road in danger;

Excessive Speeding: Driving well above the speed limit in a residential neighborhood or driving 25 miles or more over the posted speed limit;

Dangerous Driving Maneuvers: Examples here include the kind of driving we are all too familiar with and which are depicted in movies such as Fast and Furious (illegal passing or weaving through traffic);

Speeding on a difficult-to-drive winding or dark mountain road here in Colorado.

Common Defenses to a Charge of Reckless Driving in Colorado

In Colorado raising defenses to a charge of reckless driving means asking important questions after a careful analysis of the evidence in the case.

Failure to Identify the Driver

The State must prove that the person suspected of reckless driving actually committed the offense of reckless driving. The question asked here is this: What is the evidence that proves the identity of the driver? Did the police officer actually witness the driving, or is the state relying on the credibility of another witness or witnesses to the driving?

As discussed above, a person driving negligently does not support a verdict for reckless driving. A driver on their way to work and in a hurry may take unnecessary chances but their actions may not rise to the level of a willful and wanton disregard for the rules of the road.

The Affirmative Defenses: Choice of Evils or Necessity

There are times when a driver is forced to drive aggressively because of emergency circumstances.

Examples include an injured person being driven to the hospital with injuries, women going into labor, a person injured in a car accident or suffering a stroke who requires immediate medical attention, or a person attempting to escape harm from another who is attempting to hurt them.

When you are charged with serious traffic crimes such as careless or reckless driving, especially there has been an accident resulting in property damage injury, or death, it makes sense to seek at least a consultation with an experienced and qualified Colorado criminal defense attorney.

The immediate and long-term impact on your life in these kinds of cases may not be immediately apparent and the decision to represent yourself may not be the right decision for you and/or your family.