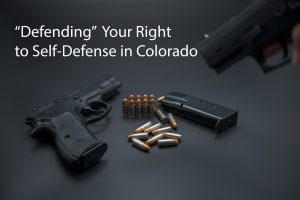 Introduction to Colorado Self Defense Law

Colorado law allows for raising the affirmative defense of self-defense a relatively easy task at trial, however, maintaining the defense may become a more difficult task over the life of that trial.

What is an Affirmative Defense?

On the other hand, if an affirmative defense is successfully raised, then the guilt of the defendant must not only be established beyond a reasonable doubt as to the original charges, but the defense adds the burden of disproving the affirmative defense to the very same standard of proof.

Colorado’s Law of Self Defense

In the state of Colorado, we believe that individuals have the right to protect themselves from harm. If one acts in self-defense one is justified in taking the steps required for self-preservation and the act of self-defense is therefore rendered completely “noncriminal.”

A successful claim of self-defense is therefore a “perfect” defense.

An affirmative defense, such as self-defense, if successful, requires a complete and perfect acquittal of the charge.  A perfect defense means the defendant is innocent of the crime.

A successful, but imperfect defense, results in a verdict of guilt at some level of crime such as a “lesser included offense.”  The defense is imperfect because it results in a guilty verdict of some kind. For example, if a jury comes back with a verdict of manslaughter in a first-degree murder trial, the jury has convicted the accused of the lower charge while acquitting on the highest charge. This results in exposure of the defendant to a substantially lower possible penalty for the charge, and consequently. The result is therefore deemed “imperfect.”

A Colorado criminal defendant must be found not guilty if the prosecution cannot prove every essential element of the crime charged beyond a reasonable doubt.

While the “some credible evidence” standard to assert a claim of self-defense is a very low bar, the District Attorney has several weapons to fight back at trial. This article reviews the two primary “exceptions” to the successful use of self-defense in this context, ….the “initial aggressor” and the “provocation exceptions.”

The bar is also set very low for the state to raise one or both of these two exceptions as a possible bar to the affirmative defense of self-defense. The “reasonable inference” standard is all that is required for the state to assert one or both of these self-defense exceptions. The state’s evidence must be such as would support a reasonable inference that the accused was the initial aggressor or was provoked the other person into attacking (or appearing to attack).

Three separate laws encapsulate the defense of self-defense in Colorado.

One way for the prosecution to defeat a claim of self-defense is to assert and prove that an exception to self-defense applies.

The two primary vehicles that are the exceptions to self-defense are the initial aggressor and the provocation exception.

A trial court may instruct the jury on an exception to an asserted affirmative defense if “some evidence” supports the exception.

Under Colorado law a person is legally authorized to use physical force upon another person without first retreating if:

1. He or she used that physical force in order to defend himself or a third person from what he reasonably believed to be the use or imminent use of unlawful physical force by that other person, and

2. He or she used a degree of force that he reasonably believed to be necessary for that purpose, and

3. He or she did not, with intent to cause bodily injury or death to another person, provoke the use of unlawful physical force by that other person.

The prosecution has the burden to prove, beyond a reasonable doubt, that the defendant’s conduct was not legally authorized by this defense.

In order to meet this burden of proof, the prosecution must disprove, beyond a reasonable doubt, at least one of the above conditions.

IF the state proves that the person accused of assault, for example, (and who now claims that he acted in self-defense) was the “initial aggressor” or “provoked” the crime, such a finding defeats the defendant’s claim of self-defense.

“Defending” the Defense of Self Defense

Colorado’s self-defense statute justifies the use of force only if a person reasonably believes there is imminent danger and only to the extent that the person uses a reasonable degree of force. The elements of the defense are clear. But the analysis does not end there. The Initial aggressor and provocation exceptions are known as disqualifying conditions that can rebut a claim of self-defense.

If the state “counterattacks” a defendant’s claim of self-defense using the initial aggressor and provocation exceptions, the defense must  then “defend the defense.”

One way for the prosecution to attempt to defeat a claim of self-defense is to prove beyond a reasonable doubt that an exception to self-defense applies.

One such exception arises when the defendant was the initial aggressor:

The “initial-aggressor” limitation is a restraint on a defendant’s right to claim self-defense. One loses the right to defend himself from an attack and becomes an initial aggressor when he is the first to physically attack another or initiates the altercation.

An initial aggressor is formally defined as the person who “initiated the physical conflict by using or threatening the imminent use of unlawful physical force.”

The defendant must withdraw from the encounter.

The Defendant must effectively communicated to the other person his intent to do so.

The other person nevertheless must continue or threate the use of unlawful physical force.

Uttering an insult or engaging in an argument also does not justify identifying a defendant as the initial aggressor. For example, in a road rage episode, an exchange of insults yelled at one another from their respective cars is probably not enough. Insults alone do not make either party an initial aggressor.

Elements of the Provocateur Limitation – the Relevant Law

The provocation exception is authorized when:

The other person uses unlawful physical force against [the defendant];

The defendant provoked the use of such physical force by the other person; and

The defendant intended his provocation to goad the other person into attacking him [or her] in order to provide a pretext to injure or kill that person.

Sometimes referred to as the “provocateur limitation”  this is another restraint on a defendant’s right to claim self-defense. A provocateur is someone who provokes an attack against himself or another.

Put differently, the provocateur loses his right to self-defense for mere insults or other non-threatening, provocative language or gestures. The provocateur who engages in this behavior with the intent to provoke an attack against himself forfeits the right to claim self-defense at trial.

Provocateurs are not permitted to legally “unring the provocative bell.” The benefit of the “withdrawal rule” is the opportunity to essentially stop the fight. Where the initial aggressor ceases to fight, the person whom the aggressor has attacked and now has no reason to advance, perhaps saving a life.

A provocateur who intentionally provokes an attack against himself loses the protection of the law because that person, having provoked the incident, morally has signed up for the full fight.

Some Serious Questions About the Provocation Exception

What is not so clear about the provocation exception is the inevitable situation where the defendant was merely exercising his right to free speech or free expression with no intent to bring about physical harm and therefore poses no threat.

The concept of the provocation exception as a disqualifier to the affirmative defense of self-defense raises other questions such as these:

Civil Society – Do we not expect some level of tolerance in a society where people are expected to control their behavior, even when angry, and do not act on impulse?

Blaming the Victim – Isn’t the provocation exception a vehicle that creates a culture of blaming the victim?

Entirely Subjective – It is nearly impossible to determine what provocative statements qualify for the exception and which do not. What could be more subjective than determining the correct “level” of provocation?

Cultural Impact – While the judge instructs the jury to use an objective test commonly referred to as the “reasonable person” standard before a finding of provocation, how can characteristics, such as ethnicity and culture which affect a person’s capacity to lose self-control, be included in that test?

It is important, before concluding the article, to point out Colorado’s third exception to the use of self-defense… mutual combat.  Under Colorado law, a person may not claim self-defense if the physical force defended against is the product of a “combat by agreement not specifically authorized by law.” See § 18-1-704(3)(c).

Summary and Conclusion – “Defending” Your Self Defense Case in Colorado

The right to self-defense has long and deep roots in both our state’s history and in our state’s legislatively enacted laws. The basic tenets of our self-defense law have remained relatively unchanged for centuries and closely reflect Colorado’s frontier culture.

A person who has properly used force to defend himself or herself is, by definition, acting reasonably. Any analysis of a Colorado self-defense case must take into account the fact that “detached reflection cannot be demanded in the presence of an uplifted knife.”

However, cases involving self-defense are complex and there are limits on the use of this defense such as the initial aggressor and the provocation disqualifiers.

An experienced criminal defense lawyer must be familiar, not only with the statutes at work here, but the case law and the concepts of these exceptions to aggressively defend attacks on the right to assert self-defense as an affirmative defense at trial.

When you are searching for the right lawyer and trying to make the most responsible choice, we encourage you to look at our firm. Over the last 35 plus years, H. Michael has studied and written about nearly every area of criminal law, criminal procedure, trial, and courtroom practice. He is passionate about getting the best result in each of the cases he defends. By studying the law and writing these articles, he hopes to not only master the law but help you in your understanding of your case in some small way.