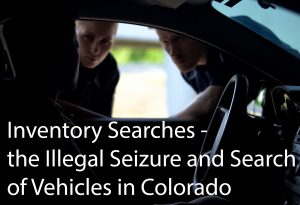 While I have written on this subject in the past, a recent Colorado case, People v Thomas, has brought the issue of the seizure, and inventory searches of vehicles once again to the attention of criminal defense lawyers across the state.

A ruse often used by Colorado police departments to conduct a search of a person’s vehicle without the required search warrant, or enough evidence to establish probable cause to conduct a search is called the “community caretaking” function that supports an “inventory search.”

The primary issue of this article asks this question:

When are the police authorized to seize, impound, and conduct an inventory search of the contents of your vehicle?

While the United States and the Colorado Supreme Courts have held that the Fourth Amendment requirements of probable cause, a search warrant, and articulable suspicion, do not apply to inventory searches, there are prerequisites that must be followed before the seizure and inventory search of a vehicle may take place.

The Fourth Amendment to the U.S. Constitution provides as follows:

“The right of the people to be secure in their persons, houses, papers, and effects, against unreasonable searches and seizures, shall not be violated, and no Warrants shall issue but upon probable cause … ,

The Fourth Amendment requires that a warrant be obtained before a search can take place. Warrantless searches are per se unreasonable (presumed to be unreasonable) and are therefore presumptively unconstitutional. The decision to permit the police to invade your right to privacy through a physical search of your person or your property must be made “by a neutral and detached magistrate” unless that search falls into one of several legally recognized and approved exceptions to the warrant requirement.

While the “touchstone” of the Fourth Amendment is reasonableness, the requirement of a warrant is subject to several exceptions. One of those exceptions is the subject of this article so-called “inventory searches” or searches pursuant to the “inventory doctrine.”

For comparison’s sake, here are the other primary exceptions to the warrant requirement:

Exceptions to the requirement for a search warrant are not only very limited, but they are also closely scrutinized by state and federal courts of appeal as they run counter to the well-established privacy rights provided by the United States and Colorado constitutions.

The legal rationale for permitting law enforcement to perform an inventory search of a vehicle without first obtaining a search warrant is commonly referred to as the community caretaking function.

The police, as their squad cars remind us in writing are tasked with both “protecting” and “serving” the public. The community caretaking function falls under the rubric of “serving” their constituency. Police departments are primarily tasked with three goals:

If there is no “valid caretaking function” that supports the seizure of the vehicle, ANY evidence discovered during a subsequent “inventory search” of that vehicle must be suppressed and may not be used for any purpose at a later trial.

The state bears the burden to prove that the caretaking exception to the warrant requirement applies in every inventory search.

The power to impound and search a vehicle pursuant to law enforcement’s community caretaking responsibilities is totally separate from their power to investigate illegal activity. These are very different functions.

The unlawful use of the community caretaking exception as a means to avoid the constitutional requirement for a search warrant is the subject of a motion to suppress any evidence that may be used as a basis for criminal charges in Colorado.

A major tool for enforcing the rights of individuals charged in a criminal case in Colorado is the Motion to Suppress.

When an officer obtains evidence in violation of the Fourth Amendment, “the exclusionary rule” bars the prosecution from introducing that evidence against the defendant in a criminal case.

Understanding the “Community Caretaking” Exception to the Search Warrant Requirement

Under the community caretaking function exception to the warrant requirement, police officers have the right, under certain circumstances, to seize and remove vehicles from the streets as part of their administrative “community caretaking responsibilities.”

To understand those limits one starts with the rationale underlying the authority to search under the community caretaking doctrine.

Inventory searches are intended to:

Protect an owner’s property while it is in the custody of the police,

Ensure against claims of lost, stolen, or vandalized property, and

Guard the police against danger.

Criteria That Will Support an Inventory Search

There must exist pre-existing standardized criteria or policies within a police department on when and how a police officer may search a vehicle. If there are no standardized written policies in place at the time of the seizure, the seizure is deemed unreasonable and the analysis ends there.

Even if a seizure complies with standardized criteria, the next question in the analysis is whether the impoundment and subsequent inventory of a vehicle actually and specifically “serves an administrative community caretaking function.”

If the police impound a vehicle for purely administrative reasons, that reason alone does not justify a seizure and cannot be used as a ruse to fulfill the officer’s duty to investigate criminal activity.

To determine whether impounding a vehicle furthers a community caretaking purpose, a Colorado trial court, upon reviewing the seizure and search, will look at the totality of the circumstances, including but not limited to:

Whether the driver was arrested,

The time and location of the arrest,

Whether the driver could produce proof of ownership,

Whether a licensed and authorized person was available to take custody of the vehicle,

Whether the vehicle impedes traffic, is parked illegally or threatens public safety, and

Whether there is a demonstrated need to protect the vehicle and its contents against vandalism or theft.

The issue in every case is whether, under the totality of the circumstances there is an appreciable risk that a vehicle is potentially vulnerable to vandalism or to theft if it is left where it was parked, or whether there are other factors that could support impoundment.

An impoundment may be held reasonable where a police officer’s concerns about vandalism are reasonable, the vehicle is obstructing traffic or the vehicle is parked on the shoulder of a busy highway and is therefore easy prey for thieves and may pose a safety threat. However, it is critical to note that leaving a defendant’s vehicle unattended is insufficient to justify its impoundment.

The catch? If the police find contraband during the course of a lawfully performed inventory search, that evidence may later be admissible in a criminal trial on entirely different charges that formed the grounds for the initial arrest.

A person arrested for DUI (a misdemeanor crime) whose car may be safely and legally parked close to the site of the stop may end up being charged with the much more serious felony charges of possession of a controlled substance as a result of the seizure and inventory search of their vehicle.

Under the evolving Colorado inventory search doctrine, when a person is arrested after driving their car the police no longer automatically have the right to impound and search that vehicle because departmental regulations permit that search.

If a police officer can safely park and lock that car at or near the location where the car was stopped or show some other justification for impounding that vehicle, seizing and searching that vehicle may no longer be an option available to law enforcement.

There must “particularized evidence” that justifies the impoundment of that vehicle when that car can be locked, securely parked, and left at the location of or at a nearby location at which the vehicle was stopped or perhaps released to a responsible adult of the driver’s choosing. 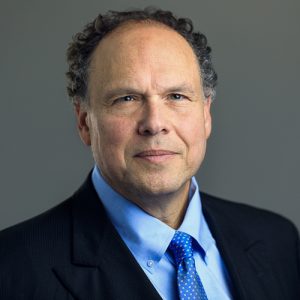