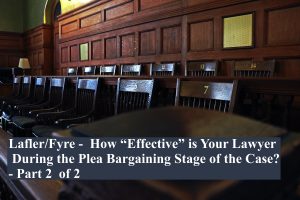 In Part 1 of this two-part series, the basics of a claim of ineffective assistance of counsel at the plea bargaining stage of a criminal case were explored. Part 2 delves into the more complex, and often difficult “mechanics” of the attorney-client relationship as regards the duty to maintain only the clearest of communication during that critical stage.

END_OF_DOCUMENT_TOKEN_TO_BE_REPLACED 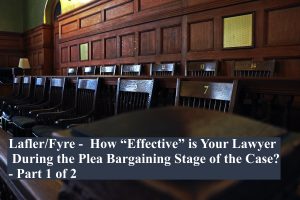 Introduction – A System of Negotiations, and Very Few Trials

END_OF_DOCUMENT_TOKEN_TO_BE_REPLACED 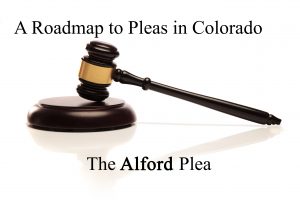 Colorado Rule 11 (Colorado Rules of Criminal Procedure provides for three basic pleas in a criminal case (not including the NGI plea – not guilty by reason of insanity – not addressed here).

END_OF_DOCUMENT_TOKEN_TO_BE_REPLACED

As A result of some 38 plus years of both prosecuting and defending Colorado domestic violence cases – I am more convinced than ever – that they are unfair and inequitable.

Most unfair of these laws is the loss of the right to bear arms under the Lautenberg and Brady Bills, As a result of sometimes minor if not ridiculous domestic violence arrests – if the matter is not completely dismissed and in some cases – expunged – police and military officers lose their careers.

END_OF_DOCUMENT_TOKEN_TO_BE_REPLACED

Colorado lawyers who threaten to report a crime to the police unless they are paid money MAY BE violating the criminal and ethical laws of the state.

The Criminal Side of Threatening Criminal Prosecution

(1) A person commits compounding if he accepts or agrees to accept any pecuniary benefit as consideration for:

(2) It is an affirmative defense to prosecution under this section that the benefit received by the defendant did not exceed an amount which the defendant reasonably believed to be due as restitution or indemnification for harm caused by the crime.

(3) Compounding is a class 3 misdemeanor.

Every state has it’s own version of the Rules Of Professional Conduct (RPC). Colorado is no exception.

One is Rule 4.4 prohibits embarrassing, delaying, or burden a third person

“In representing a client, a lawyer shall not use means that have no substantial purpose other than to embarrass, delay or burden a third person, or use methods of obtaining evidence that violate the legal rights of such a person.” Rule 4.4, RPC.

“In the course of representing a client a lawyer shall not knowingly: . . . Make a false statement of material fact or law to a third person.” Rule 4.1(a), RPC. They also provide that “A lawyer shall not . . . offer an inducement to a witness that is prohibited by law.”

… “[a] lawyer shall not bring or defend a proceeding, or assert or controvert an issue therein, unless there is a basis for doing so that is not frivolous, . . .”

“It is professional misconduct for a lawyer to: . . . Commit a criminal act that reflects adversely on the lawyer’s honesty, trustworthiness or fitness as a lawyer in other respects” or to “engage in conduct that is prejudicial to the administration of justice.”

Lawyers must be honest and fair play in their dealings with people other than their clients.

These rules also … collectively prohibit threatening criminal prosecution solely for the purpose of negotiating a favorable settlement in a civil action – something on the order of theft by extortion within the meaning of the criminal code.

The rules overlap in their application and must be read carefully.

But this does NOT mean the mere mention of the possibility of criminal charges being brought is off-limits? The answer is no.

The ABA Ethics Committee has also issued an opinion holding that an attorney may use the possibility of bringing criminal charges against an opposing party in a private civil matter as long as the civil matter and the criminal matter are related and warranted by law and fact, provided that the attorney does not try to influence the criminal process. ABA Op. 92-363 (1992).

For lawyers – any wrongful conduct, including criminal conduct, dishonesty, and deceit are clearly forbidden. The rules allow lawyers to make truthful observations – it’s permissible, for example, to point out that the opposing party’s actions could be subject to criminal prosecution – but not to participate in extorting money from the other side.

Also making idle or dishonest or frivolous threats is inconsistent with every lawyer’s obligations under the RPC. BUT the lawyer CAN – in settlement negotiations – discus the criminal implications of a party’s conduct.

One Example – An Employee Steals From A Business

A lawyer representing an employee who has committed a criminal theft attempts to negotiate a resolution with the employer business or its clients, might ask that the employer refrain from reporting the matter for criminal prosecution in exchange for repayment of the money.

What is not permissible is for a lawyer representing the employer to demand huge sums of money – well beyond the amount stolen – in exchange for not reporting the theft to the police.

In addition – if the lawyer knows that a client would never under any circumstances refer a matter for criminal prosecution, it is wrong to threaten such an action.

DR7-105(A) of the predecessor Model Rules barred lawyers from presenting, participating in presenting, or threatening to present criminal charges “solely to obtain an advantage in a civil matter.”

The latest version of the Model Rules and the Colorado equivalent – eliminated this provision.

In March of this year (2012) the United States Supreme Court decided two cases that will change the face of plea bargaining forever.

In Lafler v. Cooper and Missouri v. Frye –  are U. S. Supreme Court cases involving criminal defendants who claim that their convictions should be overturned because they may have been convicted on lesser charges had their defense attorneys not given them bad advice.

END_OF_DOCUMENT_TOKEN_TO_BE_REPLACED

A Fort Carson soldier Chester Duncan, who was featured Sunday in a Gazette investigation of troops who deploy with pending felonies, appeared in court Monday on leave from Afghanistan. He hoped for a light sentence that would ensure he could return.

The judge did not give it to him.

In 4th Judicial District Court, the 28-year-old specialist pleaded guilty to choking his wife and slapping his daughter.

END_OF_DOCUMENT_TOKEN_TO_BE_REPLACED

A Colorado Judge cannot enter into plea negotiations between a prosecutor and a defense attorney. Judges cannot improperly pressure a defendant into a plea bargain by threatening that Defendant with a lengthy sentence if the defendant chooses to go to trial.

A Judge’s role is clear. A Judge must serve as “a neutral and impartial arbiter of justice” and never enter into or become involved in plea negotiations in a criminal case. Any Judge who does become so involved runs the risk of tainting the plea agreement and leading to a withdrawal from that agreement should the Defendant choose to exercise that right.