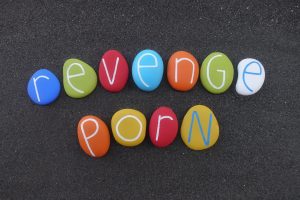 (II)(a) without the depicted person’s consent; or

(II)(b) when the actor knew or should have known that the depicted person had a reasonable expectation that the image would remain private; and

(III) The conduct results in serious emotional distress of the depicted person. (Note – it is unclear whether this element is still required after legislation enacted in 2018. However, the Colorado 2019 Criminal Jury Instructions still lists this element as required to prove the crime – see below).

Under Colorado law, a conviction for posting a private image for harassment is a class 1 misdemeanor – sentence – between six months and 18 months in jail, a fine of up to $10,000, or both.

(I) With the intent to obtain a pecuniary benefit from any person as a result of the posting, viewing, or removal of the private image; and

(II)(a) when the actor has not obtained the depicted person’s consent; or

Under Colorado Law Posting a Private Image for Pecuniary Gain is also a class 1 misdemeanor- sentence – between six months and 18 months in jail, a fine of up to $10,000, or both.

A consistent them in all criminal laws is the requirement that the terms used in those laws are clear and provide fair warning to the public. In these statutes, (compare to the civil statutes below).

Identifiable Private Parts – is defined as “external genitalia or the perineum or the anus or the pubes of any person or the breast of a female.”

As of 2019, there have been approximately 192 misdemeanor cases for non-consensual pornography filed since the bill became law in July 2014. (Denver Post)

Failure to Prove the Identification of the Alleged Victim – If the prosecution cannot prove the identity of the person in the image published – there is a failure of proof of an essential element of the crime.

The Colorado crime of extortion is very complex and has application to this article.

The crime of extortion is committed when a person tries to induce another person to:

1. Do something against his or her will,
2. Refrain from performing a lawful act, or
3. To extort money or anything else of value,

….by making a substantial threat against that person or someone else to:

1. Confine or restrain someone,
2. Cause economic hardship to someone,
3. Cause someone to suffer bodily injury,
4. Damage someone’s property or reputation; and

…that person threatens these consequences by:

1. Performing or causing an unlawful act to be performed; or
2. Invoking action by a third party — including, but not limited to, law enforcement or other government officials – whose interests are not substantially related to your interests in making the threat.

There are many ways to commit the crime of extortion – relevant here is the following type of extortion which is broken down into the elements of the crime for easier understanding:

The elements of the crime of extortion are:

1. That the defendant,
2. in the State of Colorado, at or about the date and place charged,
3. without legal authority, and
4. with the intent,
5. to induce another person against that other person’s will to perform an act or to refrain from performing a lawful act,
6. made a substantial threat to confine or restrain, cause economic hardship or bodily injury to, or damage the property or reputation of, the threatened person or another person, and
7. threatened to cause the result[s] by performing or causing an unlawful act to be performed.

Extortion applies here if one makes a threat to publish sexualized photos or other embarrassing facts publicly in an attempt to gain one of the advantages listed above. Essentially in the context of this article – extortion means trying to force another person to do something they would not otherwise do by threatening to share a private image or other private material in public.

This crime would, of course, include an attempt or a conspiracy with others to accomplish the goals of the extortion.

The elements of the crime of Criminal Invasion of Privacy are:

1.That the defendant,
2.in the State of Colorado, at or about the date and place charged,
3.knowingly,
4.observed or took a photograph of another person’s intimate parts, in a situation where the person observed or photographed had a reasonable expectation of privacy,
5.without that person’s consent

The elements of invasion of privacy for sexual gratification are:

1. That the defendant,
2. in the State of Colorado, at or about the date and place charged,
3. knowingly,
4. observed or took a photograph of another person’s intimate parts,
5. without the person’s consent,
6. in a situation where the person observed or photographed had a reasonable expectation of privacy,
7. for the purpose of the observer’s own sexual gratification.

Invasion of privacy for sexual gratification is a class 1 misdemeanor in Colorado (see above) but:

∙ If the perpetrator was previously convicted of unlawful sexual behavior it also becomes a class 6 felony.

∙ If the victim is under 18 or is impaired, physically “helpless,” or incapable of appraising the nature of the conduct, the court may sentence the defendant under the extraordinary risk enhancement for a class 1 misdemeanor – up to 24 months in prison.

As noted above, in an unusual step, the Colorado State Legislature added the following civil damages section to the original 18-7-107 criminal law.

The section (immediately below) provides, in a criminal statute, a right to file a civil action for the same criminal acts as are addressed in the crime itself.

In 2018 certain issues with the original law were legislatively resolved with amendments to the law included in Colorado House Bill 18-1264.

Among the significant 2018 changes were:

1. To apply the law to someone who is clothed if they are engaged in a sexual act.

2. The removal of the element of need to prove that the victim suffered serious emotional distress.

The Colorado State Legislature online provides the following summary of the new law:

An individual whose body is shown in whole or in part in an intimate image and who has suffered harm from a person’s intentional disclosure or threatened disclosure of that intimate image without the depicted individual’s consent has a cause of action against that person if the person knew:

The depicted individual did not consent to the disclosure;

The intimate image was private; and

The depicted individual was identifiable.

if the person disclosing the image is a parent or guardian and has not disclosed the image for purposes of sexual arousal, sexual gratification, humiliation, degradation, or monetary or commercial gain.

A successful plaintiff suing under this law may recover:

Economic and non-economic damages proximately caused by the defendant’s disclosures or threatened disclosures, including damages for emotional distress whether or not accompanied by other damages; or

Statutory damages not to exceed $10,000 against each defendant found liable for all disclosures or threatened disclosures by the defendant;

An amount equal to the gain made by the defendant from disclosure of the intimate image if applicable;

Reasonable attorney fees and costs; and

The civil action has a 6-year statute of limitation.

It was established to the satisfaction of the judge in that case, that the defendant stole a video of her engaging in sexual conduct with another man and sent the video to the plaintiff’s estranged husband out of jealousy.