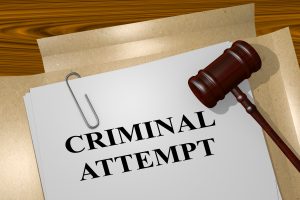 Introduction – How Can You Be Guilty of a Crime If You Only Attempted to Commit that Crime?

The crime of attempt in Colorado joins two other crimes in a broader category of criminal law called inchoate crimes. The other two crimes in the category are conspiracy and solicitation.  Historically, the evolution of the law under English common law took much time and clarification.

Inchoate means “just begun, incipient, in the early stages” What is confusing to many is the natural assumption that if a crime is left unfinished, or incomplete, how can it be criminal?

The reasoning for the law, as it evolved, came down to the idea of punishing a person for an inchoate crime were common policies underlying a large part of all criminal jurisprudence (the philosophy of law)  – the prevention and the deterrence of crime.

The policies underlying the creation of the crime of attempt are:

(1) – Crime prevention – if the perpetrator could only be punished after he or she committed a crime, the police would not be able to intervene to stop a crime until the victim or victims have been injured.

(2) – Deterrence, a defendant who is unable to complete a crime and not arrested for the attempt to commit that crime, might try again and again, to complete the crime.

The difficulty of a procedure for holding a defendant accountable for an inchoate or incomplete crime has been ascertaining the level of progress necessary to find criminal responsibility, which is especially difficult with attempt crime as opposed to other inchoate crimes because in every instance the crime is unfinished.

Other states and the United States Federal Code (U.S.C.) have specific attempt statutes that define attempt as the commission of specific crimes. These typically include crimes such as murder, robbery, or rape (18 U.S.C., 2011)

Under either of the two types of attempts thoughts alone are not criminal acts. Random thoughts of plots or plans to commit a crime are considered  “mere preparation” and that is not enough to constitute a crime. We have yet not come to a “Minority Report” society. 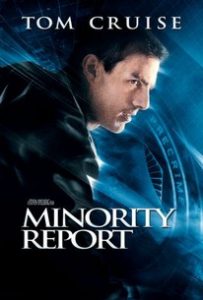 To understand the crime of attempt the focus again is on timing. The gravamen of an attempt case is this – how close did the accused come to actually completing the crime?

A jury, faced with applying the law and finding the accused guilty or not guilty of the crime of attempt is tasked with applying certain “tests” to ascertain whether the defendant has committed the “attempted” criminal act.

The Modal Penal Code’s “substantial steps test” both clarifies and simplifies the crime of attempt. It was intended to remove an arbitrary application of the law by clearly distinguishing acts that are merely “preparatory” from those that are “substantial.”

Understanding the Crime of Attempt – Some Examples

The Model Penal Code provides seven examples of actions that constitute substantial steps that are corroborative of the defendant’s intent:

A more complete fact-based example of the crime of  Attempted Aggravated Robbery under Colorado law follows:

Jonathan intends to rob a local 7-11. To do that he starts  “casing” the store for a month to learn the work habits of the couple that owns and operates the store. He determines the dates and times the store opens and closes and when the owners make their cash drop at the bank.

Jonathan uses his laptop to makes detailed notes of his timeline and carefully plans the robbery. He intends to use a knife to further the crime and actually arms himself and makes his way to the store. He hides in a nearby alley and waits for the store to close.

When the time comes to emerge from the alley to commit the crime, he is quickly nabbed by the store’s security company (the security company makes a daily run at closing time, a fact Jonathan missed in his plan to rob the store).

The exact Colorado jury instruction for the crime of Attempted Aggravated Robbery is reprinted next.

To commit the Colorado crime of Attempted Aggravated Robbery, the state of Colorado must prove that the defendant committed the crime of attempt:

The elements of the crime of attempt to commit aggravated robbery are:

A “substantial step” is any conduct, whether act, omission, or possession, which is strongly corroborative of the firmness of the actor’s purpose to complete the commission of the offense.

The Colorado Crime of Aggravated Robbery is defined as follows:

The elements of the crime of aggravated robbery are:

1.That the defendant,
2. in the State of Colorado, at or about the date and place charged,
3. knowingly,
4. took anything of value,
5. from the person or presence of another,
6. by the use of force, threats, or intimidation, and
7. during the act of robbery or immediate flight therefrom,
8. possessed any article used or fashioned in a manner to lead any person who was present reasonably to believe it was a deadly weapon or represented verbally or otherwise that he was then and there armed with a deadly weapon.
[9. and that the defendant’s conduct was not legally authorized by the affirmative defense[s] in Instruction ___.]

Is Jonathan guilty of the crime of Attempted Aggravated Robbery?

There were actually three substantial steps taken by Jonathan:

(1) He investigated the potential scene of the crime,
(2) He planned and actually possessed materials to be used in the crime’s commission, and
(3) He was lying in wait just before he tried to commit the crime.

The second part of the analysis requires that those substantial steps toward the commission of the crime strongly corroborate the defendant’s criminal intent to commit that crime?

The answer to the second part of the analysis asks – how far did Jonathan progress toward the commission of the crime? What was left to do to actually commit the crime?

In our example, it is clear that the only purpose for Jonathan’s acts was to attempt to commit the crime of Attempted Aggravated Robbery 18-2-101 and 18-4-302.

Defenses to the Crime of Attempt Under Colorado Law

To be found guilty of the Colorado crime of attempt, the prosecutor has to prove every element of the crime – one of those critical elements is, importantly, the required mental state… or the mens rea of the crime.

Under Colorado law, the mental state for the crime of attempt is the same mental state of the crime that the defendant is alleged to require to complete the crime he is attempting to commit.

In our example of attempted aggravated robbery, that mental state is “knowingly.”

Although unlikely in our hypothetical, if the prosecution fails to prove – beyond a reasonable doubt, that Jonathan, as he attempted to commit the crime of aggravated robbery, acted without the mental state of knowingly – (essentially he knew that he was attempting to commit the Colorado crime of aggravated robbery), this lack of evidence might operate as a failure of proof or insufficient evidence defense.

The Affirmative Defense of Voluntary Abandonment and Renunciation

Along with the mental state defense, there is another key defense to a charge of attempt under Colorado law, …a voluntary abandonment and renunciation of the crime. This kind of defense functions as an affirmative defense to the crime of attempt.

The Colorado criminal jury instructions provide the following law on the abandonment and renunciation defense to attempt.

The evidence presented in this case has raised the affirmative defense of “abandonment and renunciation,” as a defense to attempted aggravated robbery.

The defendant’s conduct was legally authorized if:

1. he  abandoned his effort to commit the crime or otherwise prevented its commission, under circumstances manifesting the complete and voluntary renunciation of his criminal intent, and

2. neither the abandonment nor the renunciation was motivated in whole or in part by:

A belief that a circumstance existed which increased the probability of detection or apprehension of the defendant or another, or which made more difficult the consummation of the crime;

Or a decision to postpone the crime until another time or to substitute another victim or another but similar objective.

The prosecution has the burden to prove, beyond a reasonable doubt, that the defendant’s conduct was not legally authorized by this defense.

In order to meet this burden of proof, the prosecution must disprove, beyond a reasonable doubt, at least one of the above numbered conditions.

Part 1: The defendant must have a change of heart that is not motivated by an increased possibility of detection or a change in circumstances that make the crime’s commission more difficult. This defense is an affirmative defense if the defendant abandons his effort to commit the crime…under circumstances manifesting a complete and voluntary renunciation of his criminal purpose…

Part 2: The abandonment of the crime must be complete and cannot simply be a postponement.

Essentially, Colorado’s voluntary abandonment defense to the crime of attempt provides a strong incentive to stop progressing toward the consummation of the offense and also prevents the crime from occurring without the need for law enforcement intervention. 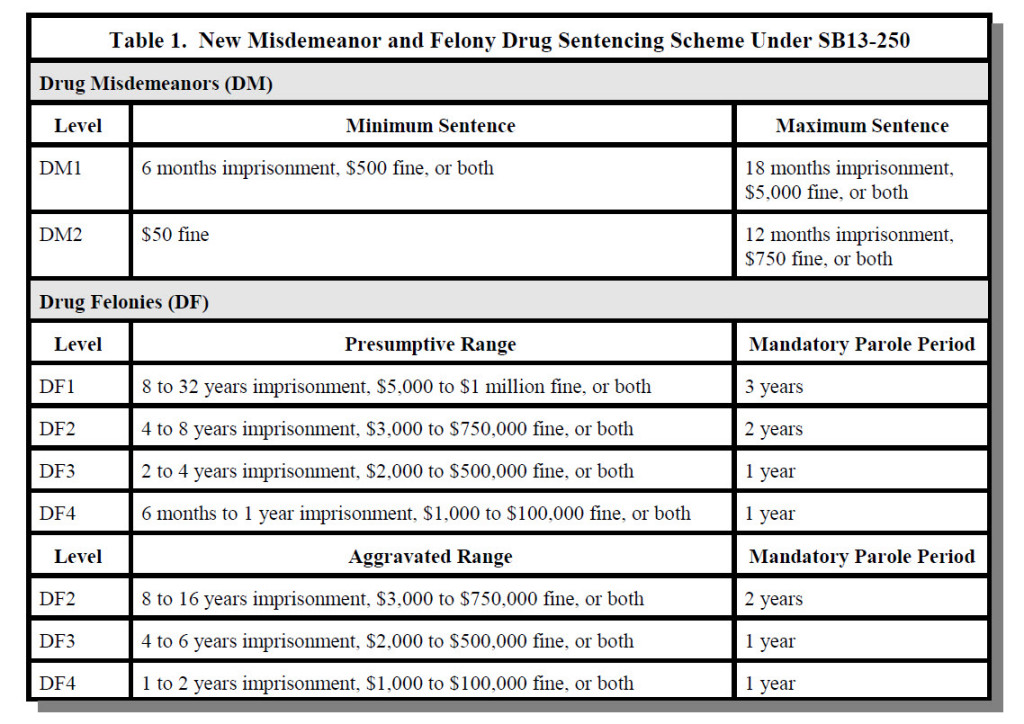 This is true for both felonies and for misdemeanor crimes.

As Applied to Colorado Drug Felony Crimes – The felony penalty for: 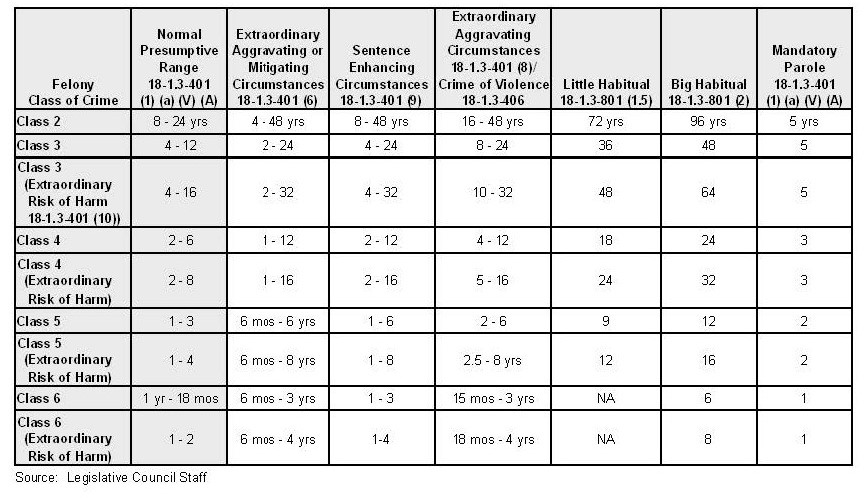 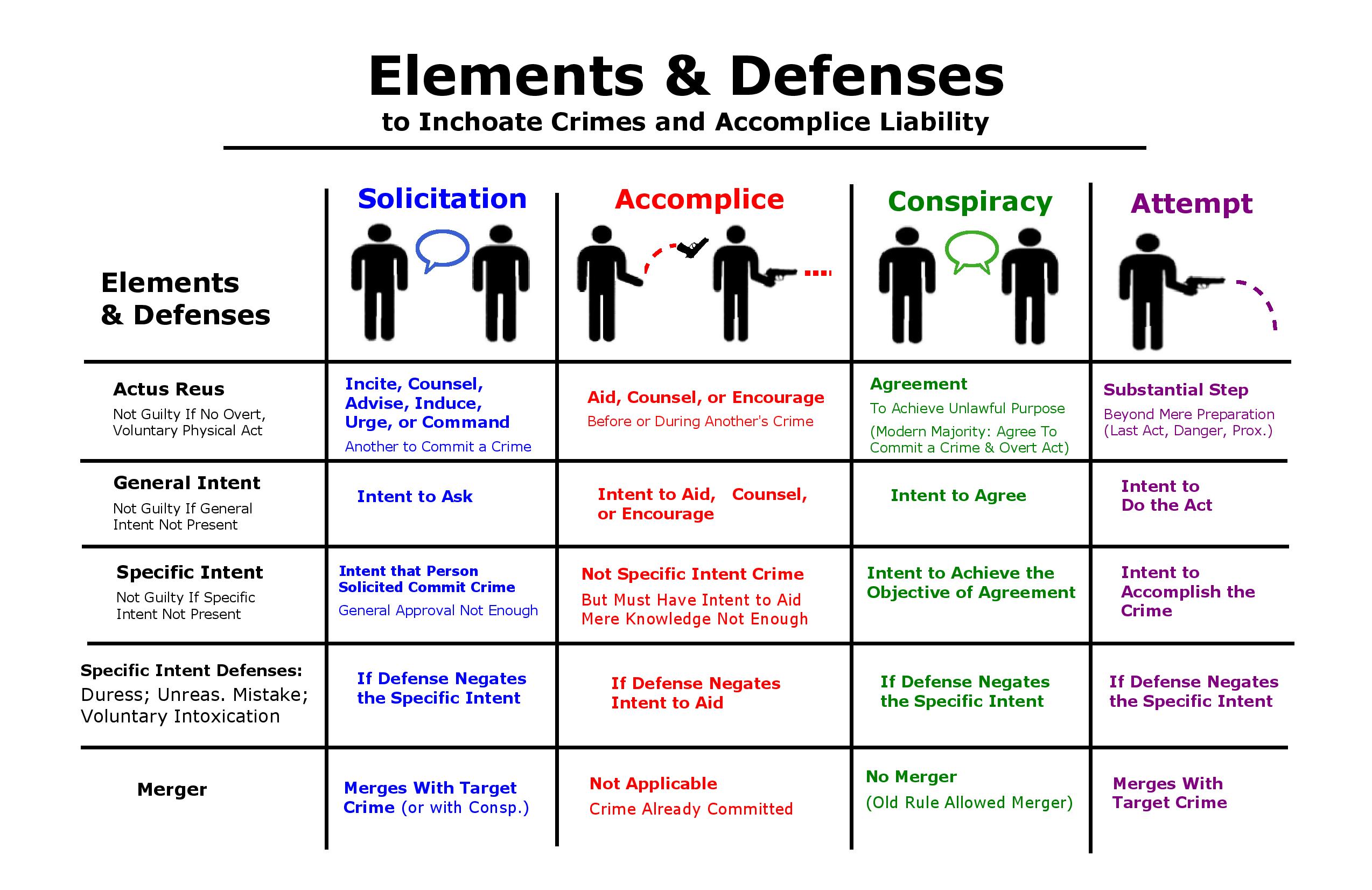 Attribution for this chart goes to Donna Leitner.

ABOUT THE AUTHOR: H. Michael Steinberg – Email The Author at hmsteinberg@hotmail.com – A Denver Colorado Criminal Defense Lawyer – or call his office at 303-627-7777 during business hours – or call his cell if you cannot wait and need his immediate assistance – 720-220-2277. Attorney H. Michael Steinberg is passionate about criminal defense. H. Michael’s extensive knowledge and experience with Colorado Criminal Law gives him the edge you need to properly handle your case.