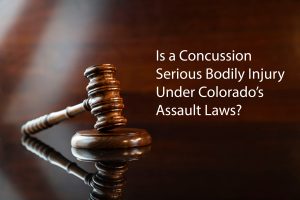 To understand a diagnosis of a finding that an alleged victim of a Colorado assault case suffered serious bodily injury, one must begin with a close analysis of the different levels of possible charges of assault under Colorado law.

While there are various “special victim” enhancers that may be applied depending on the facts of the case, for example, if the alleged victim is a police or peace officer, elderly, or disabled, or other enhancers such as the alleged use of a deadly weapon that can impact charging decisions and possible sentencing outcomes, the basic “foundational” assault crimes only are the focus of this short article.

2. with the necessary intent to disfigure another person seriously and permanently, or to destroy, amputate, or disable permanently a member or organ of his body, he causes such an injury to any person, or

3. under circumstances manifesting extreme indifference to the value of human life, he knowingly engages in conduct that creates a grave risk of death to another person, and thereby causes serious bodily injury to any person, or

The presumptive range of sentencing for this Class 3 Felony – First Degree Assault – is possible incarceration in prison of from 4 to 24 years, with fines from $3,000.00 to $750,000.00 depending on the facts and evidence of the case.

1. with the necessary intent to cause bodily injury to another person, he or she causes such injury to any person by means of a deadly weapon, or

2. with the necessary intent to prevent one whom he or she knows, or should know, to be a peace officer or firefighter from performing a lawful duty, he or she intentionally causes bodily injury to any person, or

3. he or she recklessly causes serious bodily injury to another person by means of a deadly weapon, or

He or she knowingly, recklessly, or with criminal negligence inflicts bodily injury on another person.

The presumptive range of sentencing for this Class 1 Misdemeanor is up to 2 years in the county jail and fines of up to $5,000.00.

A finding of “serious bodily injury” by a medical expert in a Colorado criminal case can change the entire complexion of a case. The absence of such a finding usually means the case is charged as a misdemeanor assault. The finding of serious bodily injury means a felony filing with the possibility, even the likelihood in some cases, of a prison sentence.

physical pain, illness, or any impairment of physical or mental condition. A judge or jury must often determine whether an alleged victim has suffered bodily injury based on the facts of a case.

At trial, the jury, (or the judge in a bench trial), must make a factual finding based on the evidence admitted, as to whether the state has proven beyond a reasonable doubt that the alleged victim has suffered serious bodily injury.

Therefore a key weakness and a possible area upon which to build a defense to the felony assault charges may be the state’s medical evidence of serious bodily injury.

Does a Diagnosis of Concussion Meet the Definition of Serious Bodily Injury?

The word concussion is derived from the Latin concutere, meaning “to shake violently.” In the context of an assault, a concussion is usually caused by a direct blow to the head.

The issue is this:

Is a medical opinion of a diagnosis of a concussion suffered by an alleged victim in a Colorado assault case – always the equivalent of a finding of serious bodily injury?

Revisiting and a further breakdown of the “elements” of serious bodily injury may be helpful here.

Recall that serious bodily injury is defined into its components as:

A substantial risk of permanent disfigurement or protracted loss or impairment of any part or organ of the body, or

Breaks, fractures, or burns of the second or third degree.

[“Fractures” involve the breaking of hard tissue such as bone, tooth, or even just cartilage (broken nose)].

Concussions reflect the fact that the brain is made of soft tissue cushioned by spinal fluid and encased by the skull. During an assault, if the alleged victim suffers one or more blows to the head, the brain can actually move around inside of the skull and traumatic brain injuries can result from bruising, damage to the blood vessels and to the nerves in the brain.

The evidence in a case where a concession is alleged to have been sustained by the victim is usually the result of a diagnosis based on observations of the witnesses, the victim’s own testimony, and a formal opinion of a medical opinion.

Outward Objective and Subjective Manifestations of a Concussion

The Mayo Clinic describes the symptoms of a concussion or a traumatic brain injury (TBI) as:

The state prosecutor will attempt, in support of a filing of felony assault, to use evidence of a concussion from several sources to establish support for a finding of serious bodily injury.

Attacking a Diagnosis of Serious Bodily Injury – a Matter of Degree

A diagnosis by a medical professional of a concussion does NOT mean the victim has always suffered injuries constituting be serious bodily injury.

Concussions are “graded” based on the severity of the injury.

There are three grades of concussions:

Grade 1: Mild, with symptoms that last less than 15 minutes and involve no loss of consciousness.

Grade 2: Moderate, with symptoms that last longer than 15 minutes and involve no loss of consciousness.

Grade 3: Severe, in which the person loses consciousness, sometimes for just a few seconds.

Grade 1 or grade 2 concussions may resolve in as little as several minutes, hours, days, or even a week.

The loss of consciousness that follows a grade 3 concussion, the kind of concussion that requires an immediate evaluation and care of a physician is a different matter and can meet the required finding of serious bodily injury.

A physician evaluating a concussion most often will order a cranial computerized tomography (CT) scan or magnetic resonance imaging (MRI) test to rule out bleeding or other serious brain injuries from the concussion.

details about the mechanism of injury,

observable symptoms by the physician and other witnesses, and

neuropsychological tests to determine any cognition and memory losses following the concussion.

Diagnosing possible brain injuries such as a concussion is an inexact science. If possible, an independent review of the state expert’s diagnosis of a concussion that is alleged to meet the definition of serious bodily injury should be performed.

When a conviction may mean the loss of one’s freedom, the money invested in an independent medical evaluation is well worth turning over every stone.

Criminal defense lawyers are not doctors. If possible, retain an expert. That expert should be objective and in no way involved in the defense case theory or defense strategies.

If possible the defense should attempt to hire the superior more qualified expert who can professionally “outrank” the state’s witness. It is notable that Colorado has some of the best medical experts in the world such as University of Colorado professors as well as dozens of physicians who are recognized leaders in their fields.

A diagnosis of a concussion does not necessarily mean that an injury to an alleged victim in a Colorado assault case has suffered serious bodily injury.

A complete and accurate independent medical analysis of the state’s diagnosis of the injury and the mechanism of injury may make the difference between a felony as compared to a misdemeanor finding by a jury.

A Colorado criminal defense attorney can effectively use medical science to raise reasonable doubt on the key and critical issue of a finding, or the lack of finding, of serious bodily injury at the trial of a person falsely accused of felony assault.