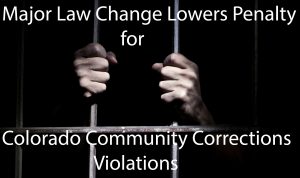 Two significant changes that will have a major impact on cases involving alleged violations of Colorado Community Correction sentences were quietly enacted in 2020.

I. The Right to an Evidentiary Hearing Before Community Corrections Before Rejection and Transfer

One of the most egregious miscarriages of justice in the Colorado criminal justice system has been at least partially addressed by the new legislation. Prior to 2020 the Colorado Prison Reduction Act, an offender was not entitled to an evidentiary hearing for re-sentencing when that offender was rejected by a community corrections program based on alleged violations of the rules and regulations of that program.

The new law requires the original sentencing court to provide an alleged violator with a right to a contested evidentiary hearing to have an opportunity to contest and to rebut the reasons for the rejection.

In the alternative, the law provides for a new sentencing hearing before termination from community corrections and reassignment back to a locked Department of Corrections prison facility.

“The sentencing court shall provide the offender with a new sentencing hearing, for any termination from a community corrections program, including a violation of section 18-8-208.2.

At any new sentencing hearing, the court may consider any sentencing alternative originally available to the court when ordering the appropriate sentence.”

II. Unauthorized Absence Charged in Lieu of Felony Escape for Leaving and Failing to Return to a Community Corrections Program – 18-8-208.2 C.R.S.

The act of leaving and failing to return to a community corrections facility can no longer be charged as a felony-level escape. Instead, a new crime entitled “unauthorized absence,” a class 3 misdemeanor must now be charged.

What follows is a reprint of the new law:

(a) Leaves or fails to return to his or her residential or facility location without permission of the supervising agency and in violation of the terms and conditions of supervision; or

(b) Removes or tampers with an electronic monitoring device required by the supervising agency to be worn by the person in order to monitor his or her location, without permission and with the intent to avoid arrest, prosecution, monitoring, or other legal process.

(3) If a parolee placed in a community corrections or in an intensive supervision program pursuant to section 17-27.5-101 has an unauthorized absence, the department of corrections shall notify the appropriate community reentry program described in section 17-33-101(7)(a) and provide contact information for the purposes of assisting the person to reengage with supervision.

House Bill 20-1019 changed the type of conduct for which a defendant could be charged with escape. The new law provides that a person serving, for example, a direct sentence to community corrections is now considered “not in custody or confinement” for purposes of the statute. (See Section 18-8-208(11), C.R.S.

Escape or attempted escape cannot be charged if the accused is not “in custody.” If, when serving a sentence in a community corrections facility, a person’s status has been categorized as legally not “in custody,” then leaving and failing to return to a community corrections facility can no longer be an escape. Instead, such conduct is now the crime of “unauthorized absence.”

The Mechanism of Change: What Does it Mean to Change the “Status” of the Person Sentenced?

The new law accomplishes this important change by redefining the ‘status” of the sentence imposed. Certain types of sentences, previously included in the felony crime of escape and attempted escape, are now excluded.

The law redefines the important requirement of “in custody or confinement” required to charge escape to als0 includes many other similar types of sentences:

Direct sentences to, or transitioning from the department (of corrections) to, a community corrections program;

Participating in a work release or home detention program;

An intensive supervision program or any other similar authorized supervised or unsupervised absence from a detention facility;

Being housed in a staff-secure facility; or

A Closer Look at the New Crime of Unauthorized Absence

The Crime of Unauthorized Absence

The new law, the crime of unauthorized absence now applies when:

A person is serving a supervised sentence outside of a prison and he or she:

Leaves or fails to return to his or her residential or facility location without permission of the supervising agency and in violation of the terms and conditions of supervision;

Removes or tampers with an electronic monitoring device required by the supervising agency to be worn by the person in order to monitor his or her location without permission and with the intent to avoid arrest, prosecution, monitoring, or other legal processes.

Another Benefit of the New Law – It May Be Applied Retroactively

As explained above, House Bill 20-1019, the Prison Reform Act, reduced the penalty and level of offense by redefining custody and confinement to remove certain conduct previously associated with the felony crime of escape. It is clear that every new or unresolved case filed will fall under the new configuration, but what about defendants who have previously been convicted under the old law?

When a new law is interpreted as ameliorative legislation, a person accused of the previous crime (in this case felony escape) may be entitled to the retroactive application and benefit of the new law.

An explanation is necessary to explain why this new law can be applied to convictions entered prior to the creation of the law may be helpful.

Typically, new criminal statutes are presumed to operate prospectively – i.e. focused on crimes that have not been resolved on the effective date of the new law.

“The [amendment] of any statute or part of a statute . . . shall not have the effect to release, extinguish, alter, modify, or change . . . any penalty, forfeiture, or liability . . . which shall have been incurred under such statute, unless the repealing, revising, amending, or consolidating act so expressly provides . . . .”

If a new law is not specific as to whether it will be applied only prospectively and not retroactively, a defendant may seek the retroactive application of the new law if he or she directly benefits from the change in the law.

Colorado law provides, under Section 18-1-410(1)(f)(I), C.R.S. that a Colorado defendant may request post-conviction relief if :

“there has been significant change in the law, applied to the applicant’s conviction or sentence, allowing in the interests of justice retroactive application of the changed legal standard”.

Since H.B. 20-1019, the Prison Reform Act is clearly a “significant change in the law”  that does not contain language indicating that it applies only prospectively… therefore it may be applied retroactively.

The newly enacted statute changes the category of crime for conduct that was previously chargeable as felony escape therefore those convicted under the old law now have the right to seek the shelter the change provides which is a modification of their sentence.