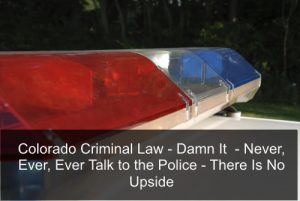 When a police officer tells you he is there to “get to the truth,” – the “truth” is the police see themselves as part of the prosecutor’s team…. not your team.

The Right To Remain Silent – Use It. – When You Are Stopped By The Police

When a police officer wants to talk to you, you are either a potential target or a potential witness. They are conducting a criminal investigation and .. yes they want to solve the case – make an arrest and close the case.

Until you know which you are – it is ALWAYS in your best interest NOT to cooperate.

“no person…shall be compelled in any criminal case to be a witness against himself.”

Know this – a police officer cannot arrest you for refusing to answer questions. If the officer has probable cause to arrest you – there is nothing you will say or do that will stop that arrest.

You will NOT talk your way out of the arrest.

Until you know more about your role in the investigation – exercise – orally – and loudly so it is clear – “I am exercising my right to remain silent under the Fifth Amendment.”

Your Sixth Amendment Right To A Lawyer:

“In all criminal prosecutions, the accused shall enjoy the right to a speedy and public trial, by an impartial jury of the State and district wherein the crime shall have been committed; which district shall have been previously ascertained by law, and to be informed of the nature and cause of the accusation; to be confronted with the witnesses against him; to have compulsory process for obtaining witnesses in his favor, and to have the assistance of counsel for his defence.”

Known as “lawyering up” – the single most Constitutionally protective three words in the English language are-  “I want a lawyer.” By saying those words – the police cannot ask you any more questions – period.

The law is clear. Just day “I want a lawyer”

Investigative questions – the basic questions asked at a traffic stop – such as license, registration and proof of insurance must be answered under Colorado law.

But other questions – such as in a DUI investigation  – “How much did you have to drink tonight?” or “Where were you coming from?” – or “May I look in your trunk?”  Should always be answered in the same way – “I want a lawyer” and nothing else.

“I want a lawyer” ends all questioning.

Some basic concepts first. Why you should not answer questions from the police.

First,  police officers may attempt to mislead you into incriminating yourself.

Second, police officers may misunderstand what you say, intentionally or accidentally.

And third, you may admit to knowing some facts which can later be used to prove your involvement or knowledge of a crime.

Finally, the police may put words into your mouth and claim that you made incriminating statements, when in reality, you did not.

You are at a disadvantage when talking to the police. They are trained to trick you into obtaining statements that can be used against you at trial. You might think you can talk your way out of trouble… and maybe you can… but the odds are massively against you.

The answer is simply – one or two phrases – the “I will not answer your questions” and “I want a lawyer”… At the utterance of those last four words – at a minimum – all questioning must stop – they end the questioning.

You must assert your rights because if you answer the questions of the police – the Judge will consider the exchange a “consensual encounter” and a later claim you never intended to say the things you said will fall onto the Judge’s deaf ears.

You must always invoke your Fifth and  Sixth Amendment rights to remain silent by stating you do not wish to talk without first consulting a lawyer.

Invoke Your Right To A Lawyer! – “Lawyer Up”

Colorado Criminal Law – Damn It – Never, Ever, Ever Talk to the Police – There Is No Upside

If you found any of the information I have provided on this web page article helpful please click my Plus+1 or the Share buttons for Twitter and Facebook below so that others may also find it.

ABOUT THE AUTHOR: H. Michael Steinberg – Email The Author at: