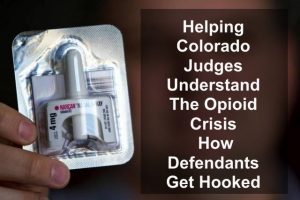 There are many reasons why people are charged with drug crimes in Colorado. The most recent epidemic of heroin possession cases can, in large part, be tied to the opioid crisis. Understanding how many those accused of the illegal possession of serious controlled substances such as heroin come to use and possess this drug is critical to defending these cases in Colorado criminal courts.

First – How Opioids Affect The Body

When a person is prescribed opioids and uses them over a long-term – the drugs impact the way nerve cells work in the brain. Our nerve cells become used to having opioids in our blood stream – the body craves them. When they are stopped, there is the same kind of withdrawal pain that results from other kinds of serious drug addictions. Withdrawal symptoms may include very intense aching, fever, sweating, shaking, and or chills.

Addiction happens when users continue taking the drug even though it is causing destruction in their lives and to their health.

Why keep taking the drugs? Opioids allow people in pain to walk, to work and to pursue other activities while there pain continues. To these people the relief is well worth the risk of addiction. But what occurs when the pain subsides?

Opioids are routinely prescribed for many types of pain in many kinds of medical contexts.

Getting “hooked” on prescription pain pills can occur in the most innocent of medical cases – often after routine procedures or treatments. The pattern is the same. When the prescription runs out and the pain is gone or if the pain continues and the person becomes “opioid dependent” because of an increased tolerance as a result of stopping there develops a “desperate state of withdrawal.”

Pills are then purchased, if available on the black market and …after that source dries up – there is heroin – cheaper and just a step away.

Recent studies have found that many who later find themselves addicted to opioids, began that path to addiction with Emergency Room prescriptions. A Harvard study found there was a strong connection between ER room visits and:

“…the frequency with which an ER doctor prescribes opioids and the likelihood of a patient developing a long-term addiction.”

ER docs, because of the nature of their practice, are prone to treating patients with opioids.  They are “frequent prescribers” and 30 percent of patients who received “scripts” from frequent providers are more much more likely to develop a long-term addiction later in their lives.

While ER doctors typically only give patients small amounts of opioids for their immediate pain, these “initial” prescriptions are later refilled by follow up primary care physicians who then prescribe for the long term.

ER prescriptions are refilled by personal physicians who feel they have little choice but to continue their patients – who complain of pain – on the opiates originally prescribed in the ER.

The ease at which these powerful drugs are prescribed has led to a sea change in who ultimately becomes the heroin addict. The face of the heroin addict today – is your neighbor, your co-worker, your .. .child.

Why All Police Should Carry Narcan

EMTs, paramedics and even the police are faced  today with an epidemic of overdoses and are administering overdose-blocking medicines such as Narcan to save lives. The more common name of the anti-overdose drug – Narcan – is so well known to all kinds of first responders as a result of the skyrocketing use of heroin – that Naloxone (Narcan) has become a part of their daily vocabulary.

The Changing Face Of Addicts And Addiction

Older Judges in Colorado who are faced with relapsing opioid addicts must better understand the sequence of addiction. The attitude that those who suffer from addiction are in some way morally flawed, ..is not an informed opinion.  Judges must be educated to begin to look at all addicts as people who have a problem that may well be beyond their control.

Anyone can be a victim. Opioid addiction crosses all socio-economic lines. There is no longer a “typical addict.”

Doctors At The Point Of Prescription – Offer No Guidance – No Help

The majority of heroin addicts state that their doctors gave them little or no guidance on how to quit using these drugs. At the outset of prescription, these patients are rarely informed about the risks and side effects presented by these powerful pain killers.

The truth is this – anyone who is prescribed an opioid for pain management can eventually become addicted. Charging addicts with possession or use of a controlled substances makes no sense. These people need help …not incarceration – care and treatment … not jail or prison.

Without a plan offered by personal physicians for getting off prescription drugs after they are first prescribed, and with personal care doctors who later will not alter their dose or frequency, the words of Yngvild Olsen, chair of the American Society of Addiction Medicine’s become increasingly true over time – doctors

“…have a vital role to play in addressing the epidemic, not only by changing their prescribing patterns and learning a lot more about chronic pain management and addiction, but also by stepping up to the plate in learning how to treat addiction.”

The War On Drugs Is A War On The Human Condition

The so called war on drugs – a failed effort to isolate and punish and coerce compliance with the our country’s myriad drug laws has only exacerbated drug-related deaths, diseases and suffering by labeling drug addicts as “criminals.”

But there is hope in the form of Drug Courts all across the State of Colorado.

Another bright light in this very dim world is the use of “evidence based” analysis at the time of sentencing to determine  the true “threat” that addicts pose to society.

Evidence based plea bargaining and sentencing for drug offenders means focusing on these three basic factors:

(1) What is the true risk of dangerousness?

(2) What is the true prognostic risk?

(3) What are THIS defendant’s criminogenic needs?

When a Judge understands the factors behind substance dependence and addiction and that Judge at sentencing can make the distinction between a compulsion or need to use drugs or alcohol reflecting neurological or neurochemical damage to the brain from the repeated use of these toxic substances, versus a drug dealer – (who may not even use the controlled substances he sells and therefore purely preys on society for profit). When Judges can see this distinction with clarity  – a more just sentence can be imposed.

The prototypical symptoms of addiction are:

(1) intense cravings to use the substance,

(3) uncontrolled binges triggered by any ingestion of the substance.

When these three symptoms are absent, the proper diagnosis is substance abuse or misuse and treatment, not punishment, is the proper sentence.

Experienced Colorado criminal defense lawyers are proactive from the very start of the case. They must find and advocate for alternatives to the traditional administration of punishment for violating Colorado’s Controlled Substances Act.

DA’s and Judges should be given a plan that might include a thorough evaluation of the case, proposed multi level counseling and drug treatment, the use of drug agonists such as methadone or subutex, the use of community service as opposed to incarceration, etc.

Options for drug treatment can include out-patient programs, in-patient treatment, and or therapeutic counseling.

The standard of care for treatment of opioid use disorders (OUDs) is medication-assisted treatment (MAT). MAT is a combination of behavioral therapy and medications known as methadone or buprenorphine (Subutex- Suboxone). These drug agonists can work. They are safe and effective, and when used in conjunction with psycho social and medical support, opioid addicts can beat their addictions.