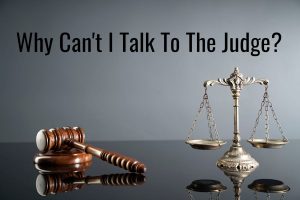 The question – “why can’t I just talk directly to the Judge,” is often asked of me by my clients in Colorado criminal cases.

The reason is found at the heart of the sanctity of the criminal justice system itself… basic fairness. With very few exceptions, any contact by a “party” to a civil or criminal case requires the other side being present. If the other side is not present, it is called an “ex parte” contact. An ex parte contact violates the very foundation of the justice system because that contact is inherently unfair to the party not present.

The rule against ex parte contacts with the Judge enables that Judge to decide the case in court fairly. The law is intended to make certain that a Judge’s decisions are based on the evidence and arguments presented to the court and the law and nothing else. It is all about trust in the justice system and if you think about it – this makes sense.

A Closer Look At the “Why” Of This Rule

The why of the rule is simple – as a criminal defense lawyer protecting my client’s rights is of paramount importance. I would be very angry if I found out that the District Attorney prosecuting my case was talking to the Judge about that case outside of my presence and participation.

I would want to make certain, in this instance, that I have the same information as the Judge who will be deciding my client’s criminal case. If information is conveyed without my knowledge and participation then I cannot contest that information asserting the Defense point of view as that evidence.

Under Colorado law, a Judge cannot initiate, permit, or consider ex parte communications, or consider other communications made to the judge outside the presence of the parties or their lawyers, concerning a pending or impending matter.

“Ex parte” is Latin for “on one side only; by or for one party.”

An ex parte communication is a “communication between counsel and the court when opposing counsel is not present.” Black’s Law Dictionary 296 (8th ed. 2004).

Ex parte communications are “contrary to the basic values of fairness governing litigation under our adversary system.”

An ex parte communication is ANY COMMUNICATION by a party to a case such as talking or writing, or otherwise communicating directly with the presiding Judge about the issues in the case without the other parties’ knowledge.

A “party” is defined in a criminal case, is the District Attorney, or the Defendant and his or her Defense Lawyer.

An Example Of An Ex Parte (Illegal) Contact With A Judge

An example of an ex parte contact in a criminal case is as follows: Let’s assume that a key piece of evidence – such as a video of an armed robbery – has been submitted by the State as evidence in a case. Let’s add that the Defense asserts that the video is tainted somehow in terms of its quality and/or the method of its seizure – (the circumstances under which it was seized by the police). Finally, assume the Defense Lawyer has objected to the admission of the video at trial.

Next assume that the Judge has decided to view the video in chambers, alone, to make certain it is admissible under the law and the rules of evidence.

If the District Attorney watches that video and comments on it without the Defense Lawyer being present to hear this interaction and to argue the defense perspective – this is an ex parte – illegal contact and may lead not only to a mistrial and to the recusal of that Judge from the case.

Exceptions To The Ex Parte Rule

(1) When circumstances require it, ex parte communication for scheduling, administrative, or emergency purposes, which does not address substantive matters, is permitted, provided:

(a) the judge reasonably believes that no party will gain a procedural, substantive, or tactical advantage as a result of the ex parte communication; and

(b) the judge makes provision promptly to notify all other parties of the substance of the ex parte communication, and gives the parties an opportunity to respond.

(4) A judge may, with the consent of the parties, confer separately with the parties and their lawyers in an effort to settle matters pending before the judge.

(5) A judge may initiate, permit, or consider any ex parte communication when expressly authorized by law* or by consent of the parties to do so.

Under Colorado Law, a Temporary Protection Order can be issued if a Judge is persuaded that a person or person may be in immediate danger of harm. A TRO is designed to protect the protected party until the Permanent Protection Order (PPO) hearing takes place not more than 14 days later.

Ex Parte contact with the Judge deciding on whether to issue the TRO is allowed because the hearing is held on an emergency basis most often where there are allegations of domestic violence case.

A Colorado TRO hearing is a relatively brief hearing before a Judge at which the Judge decides whether the emergency restraining order should be issued.

What Must Happen If A Judge Receives An Ex Parte Communication? – Recusal

A commitment to impartiality is perhaps the most fundamental tenet of being a Colorado Judge. If that impartiality is legitimately raised, in other words, the ex parte contact goes to a significant issue in the case … if there is even an appearance of impropriety as to that issue, the law requires that the Judge in question:

“[T]o disqualify himself or herself in a proceeding in which the judge’s impartiality might reasonably be questioned.

“If a Judge violates the rule against ex parte communications, that Judge may voluntarily recuse themselves from the case or, again if the communication is significant, they risk the possibility that any significant decisions made in the proceeding may be overturned by an appellate court.”

How Then Does One Communicate Their Issues With A Judge?

If You Have A Lawyer

First and foremost, if you are represented by a lawyer – do NOT do anything without that lawyer’s knowledge and consent.

If You Don’t Have A Lawyer

If you are representing yourself – Here are the rules that apply as regards any communications with the Judge in your case.

“Can You Keep This From The Other Side Please?”

● You cannot ask a Judge to keep ANY communication confidential – (to be kept from the other Party or Parties). A Judge is required to disclose any ex parte communications to all parties.

● When you intend to communicate something important about your case (very dangerous thing to do by the way if you have no experience in this area), you will need to file a written motion (essentially a letter to the Judge).

●  The letter – motion should clearly and succinctly explain what you are asking the Judge to do and why. Make certain you send an exact copy to everyone else on the case and state that you have copied every party to the case in the letter- motion.

If you fail to copy in the other parties to the case, the Judge is required to take that step to make certain this is not an ex-parte communication.

An ex parte contact with the Judge in your Colorado criminal case can be a serious mistake and can result in unintended negative consequences that will affect the defense of your case. An experienced criminal defense attorney can make all the difference in your case. HMS