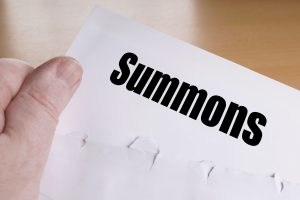 Over the last 6 years, changes made by the Colorado State Legislature in 2016 has lead to far fewer arrests and incarcerations in Colorado. The change? Allowing Judges and District Attorneys to use a summons to come to court in lieu of an arrest warrant.

An arrest occurs when a person is taken “into custody” and is not free to leave for the purpose of criminal prosecution or interrogation. This is highly traumatic to most people. It is a detention – a restriction on a person’s liberty by restraint, force, verbal command, or by creating circumstances that implicitly make it clear to that person that they are not free to leave.

To make an arrest in Colorado, a police officer must have sufficient information to establish probable cause that the person has committed an offense for which the officer has the power to arrest.. or an officer can arrest a person “under the color of an arrest warrant” when they reasonably believe that a valid warrant exists and that the person to be arrested is the person described in the warrant.

In some circumstances, (expanded by the change in the law) an arresting officer who is satisfied that the person arrested will obey a summons can have the person sign the summons promising to appear at the time and place specified. A summons is a legal document – (really just a piece of paper) ordering a person to come to a specific court at a specific time and informing that person o of the charges filed against them.

Similarly, under the law, (C.R.S. 16-5-206) Colorado Judges can issue a summons rather than issue an arrest warrant depending on the seriousness of the crime allegedly committed.

The Change In The Law

Under prior law, except in class 1, class 2, and class 3 felonies; level 1 and level 2 drug felonies; and unclassified felonies punishable by a maximum penalty of more than 10 years, if an indictment was returned or an information, felony complaint, or complaint was filed prior to the arrest of the person named as a defendant therein, the court could issue a summons commanding the appearance of the defendant in lieu of a warrant for his or her arrest unless a law enforcement officer presented in writing a basis to believe that there is a significant risk of flight or that a victim or public safety may be compromised.

The new law brings a good change to the prior law. It states that, except for class 1, class 2, class 3, and class 4 felonies; certain crimes relating to victim’s rights laws; and in unclassified felonies punishable by a maximum penalty of more than 10 years, a law enforcement officer may issue a summons commanding the appearance of the defendant in lieu of a warrant for his or her arrest based on probable cause if:

● The local district attorney consents to the procedure and has developed and approved criteria for the issuance of such a summons;

●There is a reasonable likelihood that the defendant will appear;

● The defendant has had no felony arrests during the preceding 5 years;

● There is no allegation that the defendant used a deadly weapon; and

● There are no outstanding warrants for the defendant’s arrest.

If you have more questions about the law on the use of a Summons or the issuance of an Arrest Warrant in your Colorado Criminal case please feel free to contact my law firm – H. Michael Steinberg