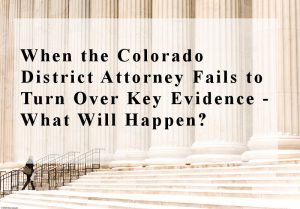 This process known as “making discovery” in a Colorado criminal case is the way a defendant literally “discovers” the evidence the state has collected to prosecute the case.

This step is ongoing, it never ends. The responsibility to disclose evidence arguably plays the most critical role in the effort of a criminal defendant’s ability to defend themselves against the power of the state’s prosecutor.

This article addresses the likely result when discovery “violations” such as a failure to disclose key “exculpatory” evidence (pointing to the innocence of the accused) is not turned over to the defense team. In that instance, the defense team demands a sanction for this failure – to punish the prosecution.

The only remaining issue when this failure is disclosed is how the judge fulfills his or her obligation to sanction the state for the violation.

Colorado Rule of Criminal Procedure Rule 16 (Crim. P. 16) governs the discovery process and it is a long and complex statute.

The Rule specifically states that:

“[t]he prosecuting attorney shall disclose to defense counsel any material or information within his possession or control which tends to negate the guilt of the accused as to the offense charged or would tend to reduce the punishment therefor.”

The United States Supreme Court held in Brady v. Maryland that due process is violated when the prosecution “withholds evidence on demand of an accused which, if made available, would tend to exculpate him or reduce the penalty.”

The obligation of the State to continuously monitor and reveal evidence is also a part of Rule 16.

“[t]he prosecuting attorney shall ensure that a flow of information is maintained between the various investigative personnel and his office sufficient to place within his possession or control all material and information relevant to the accused and the offense charged.”

The district attorney is tasked and required “to use `diligent good faith efforts’ to make available to the defense on request discoverable material `which is in the possession or control of other governmental personnel.'”

As one Colorado Appellate Court made clear:

“It is incumbent upon the prosecutor to promulgate and enforce rigorous and systematic procedures designed to preserve all discoverable evidence gathered in the course of a criminal investigation.”

Key Issues 1 and 2 – Did the District Know About the Evidence that was Withheld and at what Stage of the Case Was the Key Evidence Discovered?

The kind of sanction imposed by a trial judge when it is learned that key evidence has been withheld is determined in part by the timing of the discovery of that violation – the stage of the case when the evidence is discovered.

Tied to that key issue is the important fact regarding whether the prosecutor had actual knowledge of the exculpatory evidence that was withheld meaning did that prosecutor intend to withhold the evidence?

While the issue of whether a prosecutor had actual knowledge of the exculpatory evidence or not is important to the fashioning of the judge’s remedy for that failure to disclose, the mere fact that the prosecutor did not know about the non-disclosure is NOT a defense to the charge of a discovery violation.

The When of the Violation

If a failure to disclose evidence occurs at a pretrial stage of a Colorado criminal case, judges simply order that disclosure and there is no perceived need for a sanction to further remedy the situation.

BUT, if the failure to disclose becomes known either during or just before the start of a trial that the state had material that should have been produced – then Rule 16 gives a Colorado judge much broader discretion in deciding what should then be done.

The judge will balance several issues in this context:

1. The reasons why the disclosure was not made;
2. The extent of the prejudice, if any, to the opposing party,
3. The feasibility of rectifying that prejudice by a continuance, and any other relevant circumstances.

Among the options open to the judge are the following – a judge may:

1. Order the noncomplying party to permit the discovery of the material and information not previously disclosed;
2. Grant a continuance (if possible); or
3. Enter such other order as it deems just under the circumstances;

If at any time during the course of the proceedings it is brought to the attention of the court that a party has failed to comply with this rule or with an order issued pursuant to this rule, the court may order such party to permit the discovery or inspection of materials not previously disclosed, grant a continuance, prohibit the party from introducing in evidence the material not disclosed or enter such other order as it deems just under the circumstances.

Whether the judge imposes a sanction of the extreme side of its’ power may well depend on whether the prosecutor willfully violated the rule or order.

The “Tailoring” of the Sanction to Remedy the Discovery Violation

Judges are guided by another important principle in deciding how to remedy a discovery violation. That principle is this – in the judge’s role to remedy the prejudice to the defense if the trial judge finds a violation of discovery under Crim P. 16, they are directed to do so while trying to promote “compliance with the discovery rules while affecting the evidence at trial and the merits of the case as little as possible.'”

The dismissal of a case, or even the less severe suppression of the withheld evidence as a sanction for a violation of discovery, is not favored by the law in this area.

The reasons are based on the policies underlying the purpose of a trial as “a search for the truth.”

Most courts across the country that have ruled in this area on appeal have found that an exclusion of prosecution evidence produces “a disproportionate windfall for the defendant.”

Colorado Courts of Appeal have also found that the purpose of the discovery process, including the imposition of sanctions, is to advance the search for truth. When a violation is found and analyzed, those courts have instructed the Colorado trial judge to impose “the least severe sanction that will accomplish the desired result prompt and full compliance with the court’s discovery orders.”

Finally, while the defense will demand the most extreme of the sanctions available to the trial judge, the dismissal of the state’s case,.. in the absence of a deliberate and willful failure of the prosecutor to disclose key exculpatory evidence … that sanction will most often be reviewed on appeal as an abuse of the judge’s discretion.