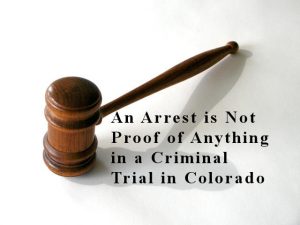 Prosecutorial misconduct is defined by the United States Supreme Court as a circumstance where a prosecutor breaks a law or a code of professional ethics in the course of a prosecution. In Berger v. the United States, 295 U.S. 78 (1935),

Prosecutorial misconduct is the…

“overstepp[ing] the bounds of that propriety and fairness which should characterize the conduct of such an officer in the prosecution of a criminal offense.”

Prosecutorial misconduct is a very real issue in Colorado criminal cases and can, and often does, make the difference between a guilty or not guilty verdict. The words of the prosecutor, as the designated representative of the “People of the State of Colorado,” as is so often pointed out during a Colorado criminal trial, have significant persuasive force with the jury.

“It is a fact that Colorado juries naturally and almost always give greater weight to the prosecutor’s arguments.”

A prosecutor is more than just a lawyer, he or she is “a minister of justice” and not simply an advocate. The Colorado Courts of Appeal have repeatedly stressed, in numerous opinions, that:

“a prosecutor, while free to strike hard blows, is not at liberty to strike foul ones”

…and that every individual in our country has a right to a trial by a fair and impartial jury under the Sixth Amendment to the United States Constitution and Article II, sections 16 and 23 of the Colorado Constitution.

A prosecutor has a higher ethical responsibility than other lawyers because they serve a dual role as a representative of the state and an overarching responsibility to be an advocate for justice.

The 6th Amendment guarantees that an impartial jury decides an accused’s guilt or innocence solely on the basis of the evidence properly introduced at trial. This is critical if the right to a fair trial is to have any meaning.

I have worn both hats during my lengthy career in the courtroom and have a lifetime of personal experience that allows me to know and thoroughly understand that a prosecutor must be scrupulously held to a very high standard of fairness in presenting their cases to Colorado juries.

There are essentially four well-recognized areas of prosecutorial misconduct:

1. The failure to disclose exculpatory evidence, or suppressing that evidence in some fashion,

2. The introduction of inadmissible or false evidence in court or encouraging deceit from witnesses, or using threats or intimidation with witnesses,

3. The use of improper arguments, and

There obviously are many more lesser-known types of misconduct – but this article addresses Types 2 and 3 – the introduction of inadmissible evidence and the use of improper arguments.

In a very real and serious felony trial in Denver, the prosecutor, sensing he was losing, pulled out a very common “dirty trick” from the very deep arsenal of dirty tricks available to district attorneys.

The tactic is this – the prosecutor admits into evidence, usually through the lead investigator/detective that the case was carefully “screened” by law enforcement before charges were filed.

The evidence, if allowed by the trial judge, seeks to establish to the jury that the State engages in a “screening process” to weed out the weaker cases and, implicitly, that the State does not consider this a weak case.

The impact of this evidence is to improperly influence the jury by conveying that law enforcement, to include the prosecutor and the investigators in the case, believe in the guilt of the defendant and that they can rely on the judgment of these professionals and not on the jury’s own convictions.

The “screening process” argument supports the mistaken and dangerous impression that there is additional evidence of the defendant’s guilt that incriminates him and that this additional secret evidence should be considered by them even though the evidence was never admitted at trial.

This Case was “Screened” by the State Before it was Filed

The idea that there is a quantum of “phantom proof” of the defendant’s guilt creates the very real possibility of a real danger of a miscarriage of justice is this is especially true in a weak case where there is little or no physical evidence linking the defendant to the crime.

In Domingo-Gomez the tactic worked. The judge in the Domingo-Gomez case, admitted the screening procedure evidence which clearly suggested to the jury that they didn’t have ALL of the incriminating evidence and therefore they should find the defendant is guilty.

In other words, because of the evidence they did not hear that was allegedly held back from them during the trial, they should convict the accused.

Colorado Supreme Court Justice Michael Bender in the dissent hits the nail on the head:

In my view, the prosecutor was saying that this was not a weak case, that it was, in fact, a strong case, because enough evidence existed to support Domingo-Gomez’ guilt for the case to pass the “screening process.”

Put another way, this comment effectively told the jury that the evidence the jury heard, when combined with the other evidence presented in the screening process, established a strong case. The prosecutor’s use of the phrase “at least that” does not indicate the evidence against Domingo-Gomez was minimal, as the majority contends. Rather, it implies the State possessed even more evidence than it presented at trial.

The screening procedure tactic of improperly influencing the jury can be summed up as follows:

(1) It implies that, because of a screening process, only guilty people are criminally charged, and therefore the defendant must be guilty;

(2) It suggests that the prosecution or the witness knows of additional inculpatory evidence unknown to the jury; and

(3) It reveals the personal opinion of the witness or prosecutor as to the defendant’s guilt.

The trial judge has the “then and there” responsibility to determine if prosecutorial misconduct influenced the jury’s verdict or otherwise undermined the fundamental fairness of the proceedings and is the primary enforcer of these standards.

Whether a prosecutor’s statements constitute misconduct is generally a matter left to the trial court’s discretion. In Domingo-Gomez, the judge ‘let the evidence in’ and the Colorado Supreme Court when the guilty verdict was appealed, allowed the conviction to stand.

The dissent was well reasoned and has often been cited in subsequent cases where the convictions have been reversed.

Prosecutorial misconduct impacts the public’s perception of the integrity of the legal system and undermines the ability of the courts to achieve justice. While a district attorney may have their hand slapped on appeal, and the appeal may even, in the rare case, result in a reversal of a conviction, there is no real personal accountability for the prosecutor.

In Colorado District Attorneys are elected and THAT is the true court of last resort if the office of that District Attorney fails to train and/or hold accountable prosecutors who engage in “dirty tricks” in the prosecution of their cases. HMS