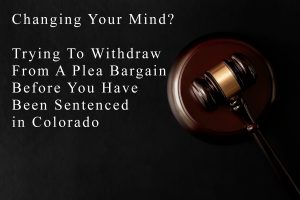 Attempting to withdraw a plea of guilty before the sentencing stage is a complex area of Colorado law. This article addresses that complexity and outlines some of the key issues that make the road to that withdrawal from the plea and subsequent restoration of a defendant’s trial rights, very difficult, if not impossible.

The take-away rule from this article should be this – before a defendant pleads guilty, that defendant should, with their criminal defense lawyer, their family and their friends, thoroughly vert and explore all sides of that decision. The reason is this, following the formal entry of that plea, especially in Colorado felony cases, that decision, to plead guilty and accept a plea agreement, is almost always permanent.

The hearing at which a Colorado judge formally advises a defendant of his rights and accepts the plea and the plea agreement is called a “Providency Hearing.”

In a Colorado case that explores the law in this area and is very illustrative of the issues that apply to the problematical decision  to change course in a Colorado criminal case – the defendant, Richard Lopez, nineteen days after the providency hearing, but before the sentencing hearing, sent a letter to the judge that he wanted to withdraw his guilty plea.

The defendant’s statement contained the kind of expressions that one often sees in the criminal justice system:

“( I believe I) made a decision I feel I would regret for the rest of my life;” “I have remained silent much too long in my defense, I am innocent, I wish to go to trial although my attorneys feel not the same. I feel I was inadequately represented, I would like the present counsel to remove themselves and be appointed with new counsel.”

The Crim. P. 32(d) Motion to Withdraw From a Colorado Plea Agreement

The defendant’s letter to the judge was heard on the date of sentencing and treated by the judge as a Motion to Withdraw Plea under Rule 32 of the Colorado Rules of Criminal Procedure.

At that hearing, the judge refused to appoint a new lawyer on the defendant’s motion but gave the defendant an opportunity to state a more factual basis for his assertion that he had received bad advice from his lawyers and that his lawyers were ineffective in connection with the guilty plea.

This is the standard procedure for a defendant who has changed his or her mind under these circumstances.

A Colorado defendant is not entitled to withdraw a guilty plea as a matter of right.  That means that Colorado’s courts are extremely reluctant to “unwind” the formal entry of a plea without a strong reason to do so.

A judge’s decision to deny a Rule 32 (d) motion to withdraw a guilty plea is addressed “to the sound discretion of the trial court,”  which essentially means that the judge’s findings and decision, either way the Court rules, will not be overturned on appeal absent an abuse of that discretion. That standard for a reversal of a trial judge’s decision, the “abuse of discretion” standard is nearly impossible to reverse if appealed.

This needs to be underscored, if a defendant loses on this issue at the trial court level, a Colorado Court of Appeals will almost never reverse that decision.

To be entitled to withdraw a guilty plea prior to sentencing in accordance with Crim. P. 32(d), a Colorado defendant has the burden of proving that there exists a “fair and just reason” for the withdrawal.

Even if the defendant can meet the burden of proof of a “fair and just reason” for a withdrawal of a formally entered plea, if the prosecution has been “substantially prejudiced by reliance upon defendant’s plea,” the request may also be denied on that separate ground.

A claim of ineffective assistance of counsel on the part of counsel representing a defendant at the time a guilty plea is entered will almost never support a finding of “a fair and just reason” to withdraw the plea prior to sentencing and therefore serve as grounds for setting aside a conviction entered on a guilty plea.

Making The Case To Withdraw a Plea Is Very Difficult

As noted above, where the reasons given by a defendant for a change to the decision to enter into a plea agreement are weak – such as a change of heart or having second thoughts as the reality of sentencing approaches, Colorado judges will almost always view those kinds of reasons as contradicting the “record” made at the time the plea was entered at the “providency hearing.”

A providency hearing is the stage at which a plea is entered. Essentially, it is a formal advisement of the defendant’s rights and the waiver of those rights. It is a lengthy procedure intended to give the defendant every opportunity to change his or her mind once they are advised of the trial rights they are waiving (giving up) when they accept the plea agreement.

Again, and this cannot be overstated, if the reasons given by the defendant for withdrawing the plea are merely “conclusory;” conclusory meaning without specific supporting evidence upon which the conclusion is based, the motion to withdraw will be denied.

When a judge, at the 32(d) hearing takes evidence from the defendant that contradicts the statements made by the defendant when that defendant pleaded guilty at the providency hearing, the judge will almost always rely on the “record” made during the entry of the plea and unsupported claims that the defendant’s attorney had given the defendant “incorrect or coercive advice,” without much more factual evidence, will not support the withdrawal from that plea agreement.

From the Sample Case

In the case referenced above, the defendant was given an opportunity to provide a more factual evidenciary basis for his written statement that he “felt he was inadequately represented.” Nothing more was offered.

The rule is this, when a defendant offers no seriously tangible grounds in support of their Rule 32(d) Motion and instead relies only on reasons that are “conclusory, inherently incredible, or contradicted by the record” a judge’s denial of that motion, as in the representative case, of a defendant’s request to withdraw his guilty plea will be denied.