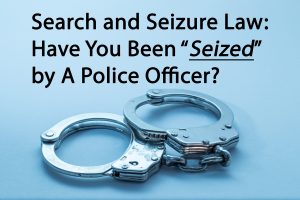 Introduction – What Does It Mean to be Seized?

The phrase “search and seizure” is very familiar to most Americans, but a clear understanding by most of us of the moment when one is constitutionally “seized” – is a different question and is the subject of this brief piece.

As I write these words, a police officer is on trial for the murder of George Floyd. Laws all across the country governing the use of force by law enforcement are justifiably under careful scrutiny. We turn to the Fourth Amendment for protection from law enforcement when our rights have been violated.

The Fourth Amendment protects  – “[t]he right of the people to be secure in their persons, houses, papers, and effects, against unreasonable searches and seizures.”

The term “seizure” of a “person,” is not defined in the constitution and has been the subject of hundreds of appellate court decisions – (aka caselaw). The seizure of a person has most often been defined as the government’s use of “physical force” or a “show of authority” that “in some way restrain[s] the liberty” of the person.

A seizure generally occurs when “an officer, by means of physical force or show of authority” restrains “the liberty of a citizen” or “the freedom of a person to walk away.”

Before reaching the question of whether a seizure is “unreasonable” under the Fourth Amendment one must answer the question: has there been a seizure at all?

“[T]he quintessential ‘seizure of the person’ under our Fourth Amendment jurisprudence” is an arrest, and “the mere grasping or application of physical force with lawful authority, whether or not it succeeded in subduing the arrestee, [is] sufficient” to constitute an arrest.”

Is the Failure to Complete an Arrest a Seizure?

While Justice Scalia seemed to close the book on the issue in Hodari, the question was never fully answered until the Court revisited the issue in the 2021 case of Torres v. Madrid.

In Torres, the question was once again posed: If a seizure by the police does not result in the actual control or detention of the target arrestee, have they been seized as defined by the Fourth Amendment?

In November 2020, the United States Supreme Court heard  Torres v. Madrid.  The Torres case helped to further refine what is commonly referred to as the “the mere touching” or “the mere grasping” rule.

In Torres, the United States Supreme Court reaffirmed the mere touching – mere grasping rule – more specifically the Court held that the Fourth Amendment prohibits “unreasonable” police shootings even if a wounded suspect escapes the arrest and then flees the scene.

In her civil lawsuit for damages, Ms. Torres argued that by shooting her, police officers used excessive force and violated her right to be free from unreasonable seizure under the Fourth Amendment.

The police, on the other hand, argued that Torres failed to show that there was an unlawful “seizure” because the officers’ use of force “did not actually stop” her.

The “mere touching” rule is this:

ANY application of physical force with lawful authority is an arrest, whether or not it succeeds in subduing the target arrestee.

Thus, a police officer’s application of physical force to the body of a person for the purpose of arresting him is an arrest, whether or not that attempt to arrest was successful.

The answer after Torres, is a resounding yes it is an unconstitutional seizure, and therefore any evidence that may be the “fruit” of that illegal attempted arrest must be suppressed in the criminal case and a civil lawsuit for damages will also lie against the government.

A Closer Look At The Reasoning of Torres

As noted, police-citizen encounters have been closely re-examined in recent years. While the police officers in Torres conceded that the Fourth Amendment protects against “unreasonable searches and seizures,” and that when police use force against a suspect, it constitutes a “seizure,” they argued that because Torres successfully evaded them for a significant period of time, there could not be a “seizure.”

The Torres case asked this question:

If the police attempt to arrest or “seize” someone and they physically harm that person in the attempt without successfully detaining them or otherwise halting their movement, have they actually constitutionally “seized” them?

“We hold that the application of physical force to the body of a person with intent to restrain is a seizure,” …“even if the person does not submit and is not subdued.”

Quick Sidebar: The Subjective Motivation of the Police Officer is No Defense

The analysis is very simple – whether the challenged conduct objectively manifests an intent to restrain. The subjective motivations of police officers in the context of a Fourth Amendment are, as noted, not relevant.

Summary and Conclusion – Search and Seizure Law: Have You Been “Seized” by A Police Officer?

In the Torres case, the United States Supreme Court made clear that the application of physical force to the body of a person with the intent to restrain is a seizure even if the person does not submit and is not subdued.

When a police officer intentionally uses force to detain a suspect but is unsuccessful – such as when the suspect temporarily evades capture – it is a seizure under the Fourth Amendment.

Seizures, under the Fourth Amendment, occur if there is an application of physical force, or there is submission to the assertion or show of authority … obtaining control over the suspect is not a requirement.

But because the Fourth Amendment does not prohibit all or even most seizures, only unreasonable seizures – examining the constitutional reasonableness of the seizure is the next step in the analysis. 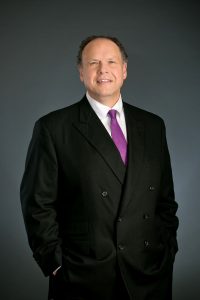