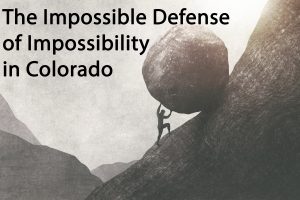 The complexities of successfully defending a Colorado criminal case require a thorough and comprehensive review of any and all of the possible legal defenses available for the case at hand. One of those defenses that should be explored is the defense of impossibility.

Helping the reader to understand the distinction between these two defenses is the purpose of this brief piece.

Legal impossibility can be asserted as a defense to such crimes as the commonly charged inchoate (unfinished) crime of attempt – Section 18-2-101.

On the other hand, with very few exceptions, factual impossibility is difficult to assert and is also legally barred as a defense to the primary crime against which it may be asserted, the crime of attempt under Colorado law.

Factual impossibility means that the accused could not complete the crime they are attempting to commit because the accused’s comprehension of the facts of the case is skewed.

Factual impossibility is NOT a defense in Colorado and most other states.

The best example of factual impossibility is a “sting” operation such as the carefully staged sale of controlled substances using an undercover police agent as the buyer.

Another “sting” operation commonly used in economic crime cases where a false business for the sole purpose of catching a thief.  Yet another is the “To Catch a Predator” operation designed to locate and then lure and arrest internet predators.

A “sting ” operation, by definition, makes the crime the accused is attempting to commit, factually impossible.

Another example of factual impossibility is the person who intends to poison their spouse with the poison strychnine by adding the substance to their spouse’s morning coffee – but mistakenly uses sugar instead. The crime that was attempted – murder – was factually impossible because of the error, but the crime is nevertheless prosecuted in Colorado as an attempt to commit murder, an incomplete crime called an inchoate crime.

The “mens rea” or mental state for the crime is present but the act itself fails because of an error made by the accused …. no poison.

More examples – the person who believes that he or she has received stolen goods but again it is a police sting operation and the goods are not, in fact, stolen.

A pickpocket reaches into another’s breast pocket intending to steal only to find an empty pocket. The killer pulls the trigger to kill but the gun jams.

The Model Penal Code, (MPC) which serves as  a template for many states criminal codes, disallows factual impossibility as a defense in the attempted commission of a crime by defining attempt as “purposely engages in conduct which would constitute the crime if the attendant circumstances were as he believes them to be”

Factual impossibility exists when the accomplishment of the crime is rendered impossible by:

(1) the physical inability of the actor,
(2) some inactive prevention, or
(3) the intervention of some natural force.

The legal impossibility defense means that the defendant believes the crime they have attempted to commit was illegal – but in fact – it is not illegal.

A person asserting a legal impossibility defense may actually complete all of his or her intended acts. They may have taken all of the steps to complete what they perceive is a crime, however, the completion of those intended acts do not meet the well-established elements of crimes enumerated in Colorado’s criminal code.

Crimes are committed when all of the elements, the parts that make up the crime itself, have been completed. Legal impossibility is a complete defense to a criminal investigation unless there exists, at the time of the acts in question, a law prohibiting those acts and making those acts a crime.

Even for the crime of attempt, a defendant who engages in conduct that he thinks is illegal but it is not, cannot be convicted of an attempt.

An example: if a person, a would-be trespasser, enters a public park at 10 pm thinking the park is closed when, in fact, the park actually closes at 11 pm that night. Under these facts, notwithstanding his intention, he cannot be convicted of the crime of attempted trespassing.

One law professor has described the difference between the two defenses this way:

Unless the objective sought is legally proscribed, the doing of it is not criminal nor is any conduct falling short of it a criminal attempt.

If the end sought is legally proscribed, the failure to attain it, because of the lack of a factual condition necessary to its attainment, is no defense.

The Crime of Attempt – Section 18-2-101 – is a crime is commonly charged in Colorado. As noted above it is an inchoate or unfinished crime. It is in the context of the crime of attempt, the defense of impossibility is most often raised.

What follows is the relevant portion of the Colorado crime of attempt:

Factual or legal impossibility of committing the offense is not a defense if the offense could have been committed had the attendant circumstances been as the actor believed them to be, nor is it a defense that the crime attempted was actually perpetrated by the accused.

Summary and Conclusion – The Impossible Defense of Impossibility in Colorado

To summarize this brief article:

Legal impossibility can possibly be a defense. It depends on the circumstances as more fully described above. Legal impossibility ONLY applies to those situations in which the intended act or acts, even if carried out, do not amount to a crime.