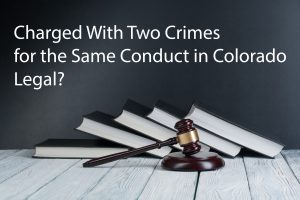 Introduction – One Set of Facts – Several Crimes Charged – Is That Legal?

I am often asked how one can be charged for multiple crimes in the same case for the same conduct – the so-called unlawful “duplicative” charging issue.

The easy case for multiple count charging is where there are multiple victims in the same course of illegal conduct such as when a person commits different crimes against different victims.

An example of this would be an armed robbery of a 7-11 store, when, at the time of the commission of the crime, each member of the group is clearly a victim of the crime. Therefore, each robbery victim presents a different count in the case and the accused can be tried for any one or all of the crimes allegedly committed.

But what about the individual who, in a continuing criminal episode, has committed a single act against a single alleged victim? Isn’t charging that person with multiple crimes for the same course of conduct unfair, unjust, and most importantly, unlawful?

The Right to NOT Be Placed in Double Jeopardy

The right to not be placed in “double jeopardy” is found in the fifth amendment to the United States Constitution:

“[N]or shall any person be subject for the same offence to be twice put in jeopardy of life or limb; … “

The double jeopardy clauses of both the United States and Colorado Constitutions preclude a defendant from being placed twice in jeopardy for the same criminal act.1 U.S. Const. amend. V; Colo. Const. art. II, § 18.

While the protection of the double jeopardy clause precludes the more familiar shield of being tried twice for the same offense, it also protects against being subjected to multiple punishments for the same offense without legislative authorization.

Double jeopardy may be violated in cases involving multiplicity, which “is the charging of multiple counts and the imposition of multiple punishments for the same criminal conduct.”

Double jeopardy protects an accused person from these three possibilities:

The “Unit of Proscution” – Multiple Charges for the Same Crime

In cases where the district attorney has filed multiple counts of the same charge, the question raised is whether the legislature intended to create a separate “unit of prosecution” for each charge or the law requires the consolidation of all conduct into one count.

A “unit of prosecution” is defined as the manner in which a criminal statute permits criminal conduct can be divided into discrete acts for purposes of prosecuting multiple offenses.

The multiplicity issue involves a series of alledegly criminal repeated acts that are charged as separate crimes even though they are part of a continuous transaction a continuous course of conduct and therefore should be charged as one crime.

Another type of multiplicity issue arises when statutes provide for alternate ways of committing the same offense that is where the prosecutor charges multiple counts of the same offense “because a defendant has committed the crime using more than one of the prohibited alternative methods.”

Under Colorado state statute – Section 18-1-408 C.R.S. “when any conduct of a defendant establishes the commission of more than one offense, the defendant may be prosecuted for each such offense.”

Different statutory enactments (crimes) may make the same conduct criminal. If the evidence supports charging each of those crimes a defendant may be prosecuted under any one or more of the crimes allegedly committed.

Put a little differently, if a defendant’s single transaction gives rise to the violation of more than one statute, a Colorado prosecutor has the disctrion – the right – to decide under which statute or statutes to charge that defendant.

However, Colorado law ALSO provides that a defendant may NOT be convicted of more than one offense if:

” [t]he offenses differ only in that one is defined to prohibit a designated kind of conduct generally and the other to prohibit a specific instance of such conduct.” 18-1-408(1)(d)

A Closer Look: the Concept of General and Specific Offenses

The question is this: Has the state illegally prosecuted the defendant for multiple offenses or does the defendant’s conduct establish the commission of more than one offense?

The multiplicity of charges issue also raises the right to due process  and the right to equal protection of the law.

A person accused of committing two or more offenses for the same conduct has the right to attack that charging decision based on a potential violation of the right to equal protection under the United States Constitution which prohibits different penalties for identical conduct.

If a Colorado judge imposes different penalties for identical conduct where a defendant is convicted for two or more crimes and one of those crimes results in a harsher penalty, there is a potential violation of that defendant’s right to equal protection.

Under these circumstances, the state must prove that there are reasonable differences or distinctions between the criminal laws in question.

Colorado courts analyze this kind of challenge by the defendant by examining “the elements” constituting each crime charged. If reasonable distinctions exist as between the statutes there is no violation of that defendant’s right to equal protection.

EXAMPLE ONE: – the Crimes of False Reporting and Attempt to Influence a Public Servant

A common attack by a defendant charged with the Colorado crime of attempt to influence a public servant is to argue that the conduct more closely fits the crime of false reporting to authorities.

The argument is this: one cannot be charged with both attempted influence and false reporting because the crimes are identical and differ only in that one prohibits a designated kind of conduct generally and the other prohibits a specific instance of the same conduct.

The elements of the attempted influence offense are:

(1) an attempt to influence a public servant;
(2) by means of deceit or by threat of violence or economic reprisal;
(3) with the intent to alter or affect the public servant’s decision or action.

The offense of false reporting punishes those who prove false information to authorities, regardless of whether their conduct is taken to gain a benefit from that public official. The crime of attempted influence of a public servant is more complex and the elements of the crime do not require that there be an instance of false reporting and can be charged in a case where no false reporting has occurred.

A defendant might “knowingly” provide false information to a police officer, (false reporting), but may not have a specific intent to “alter or affect the [officer’s] decision, vote, opinion, or action” and therefore not commit the offense of attempt to influence a public servant.

Therefore, if the facts and evidence support the individual matter, a charge of attempted influence and a count of false reporting charge can both be charged in the same case.

EXAMPLE TWO: the Crimes of Criminal Impersonation and Attempt to Influence a Public Servant

Let’s look at another example of two charges often filed in the same case – criminal impersonation and attempt to influence a public servant.

A person commits the crime of criminal impersonation by unlawfully pretending to be someone else in order to gain some benefit or to harm the subject of the impersonation.

The most commonly charged version of this crime contains the following elements:

(1) A person commits criminal impersonation if he or she knowingly:

(I) Performs an act that, if done by the person falsely impersonated, might subject such person to an action or special proceeding, civil or criminal, or to liability, charge, forfeiture, or penalty; or

(II) Performs any other act with intent to unlawfully gain a benefit for himself, herself, or another or to injure or defraud another.

The crime of criminal impersonation punishes those who assume a fictitious entity with intent to receive a benefit.

The crime of attempt to influence a public servant can be committed without the assumption of a false entity. The elements of each crime are different.

The two charges “do not differ solely by prohibiting general and specific conduct” as the crime of criminal impersonation is not a specific instance of the crime of attempt to influence a public servant and, again, for these reasons both crimes can be charged in the same case.

Why Are These Issues Important? – Facing a Lower Crime Means Less Risk at Trial

The rationale behind a defense lawyer aggressively challenging charging decisions by a prosecutor is that eliminating one or more of improperly charged more serious crimes can result in a demonstrable lessening the possible penalty for a course of conduct allegedly committed.

The lower the charge, the less serious the possible legal consequences.Using the crimes discussed in this article:

The potential sentence for Attempt to Influence a Public Servant, a class 4 felony is punishable by 2 to 6 years in the Colorado Department of Corrections and up to $500,000.00 in fines.

The potential sentence for Criminal Impersonation, a class 6 felony is 1 year to 18 months in the Colorado Department of Corrections and up to $100,000.00 in fines.

On the other hand, the crime of False Reporting is only a class 2 misdemeanor and is punishable by up to 364 days imprisonment, and up to a $1000.00 fine.

While it may be difficult to successfully raise the multiplicity argument in a Colroado criminal case, if one can thread the perverbial legal needle of establishing constitutionally illegal charging, the result of facing significantly lower charges is well worth the effort.