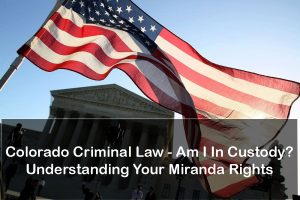 Colorado Criminal Law – Am I In Custody? Understanding Your Miranda Rights – Understanding your Miranda rights is as simple as analyzing two questions: Were you in custody? If yes, were you questioned by law enforcement?

Both questions have to be answered in the affirmative before your so called “Miranda rights” attach the situation.

Because, in most instances, it will be obvious that you are being questioned, this article addresses the more complex of the two questions:

Were you “in custody?”

A Judge’s determination that a suspect’s incriminating statements were obtained in violation of his Miranda rights turns on whether:

1. You were in police custody

2. You were subjected to interrogation when he made those statements.

The Miranda Rule: The Law

The Fifth Amendment to the United States Constitution provides that no person:

” shall be compelled in any criminal case to be a witness against himself.”

The Miranda Rule (Miranda v. Arizona, (1966)- protects your Fifth Amendment Rights. To protect these rights the police are required, when two things occur at the same time:

In order to protect your Miranda rights the police must provide a suspect in custody who is being interrogated by making certain you understand certain warnings before subjecting him or her to interrogation – the Miranda Warnings.

ANY incriminating statements obtained without the Miranda Warnings and a waiver of those warmings  are subject to suppression in a later Motion to Suppress Statements hearing.

To determine whether a suspect was in custody during an interrogation, the Trial Court asks this question:

Would a reasonable person in the suspect’s position have felt ” deprived of his freedom of action to the degree associated with a formal arrest.”

This is a fact intensive and objective inquiry made on a case-by-case basis and it is made (see below) in light of “the totality of the circumstances.”

What follows is a fairly comprehensive, but not exhaustive, list of factors in determining whether a suspect is “in custody” during police interrogation. The relevant factors include:

(1) the time, place, and purpose of the encounter;

(2) the persons present during the interrogation;

(3) the words spoken by the officer to the defendant;

(4) the officer’s tone of voice and general demeanor;

(5) the length and mood of the interrogation;

(6) whether any limitation of movement or other form of restraint was placed on the defendant during the interrogation;

(7) the officer’s response to any questions asked by the defendant;

(8) whether directions were given to the defendant during the interrogation; and

(9) the defendant’s verbal or nonverbal response to such directions.

(10) whether the officers told the defendant he was free to leave.

A Colorado Motion to Suppress hearing focusses on all of the possible factors to determine whether your rights to remain silent were violated.

The “test” applied to the facts of the motion to suppress makes sense – it is called “the totality of these circumstances test.”

If a Judge finds that a “reasonable person,” in your circumstances, would have felt deprived of his freedom of action in a manner similar to a formal arrest then you will be found to have been “in custody” for the purposes of the Fifth Amendment.

If, after this fact intensive analysis of your case, it is found that you were subjected to “custodial interrogation” without being advised of his Miranda rights, your statement must be suppressed and cannot be used against you at your trial.

Colorado Criminal Law – Am I In Custody? Understanding Your Miranda Rights