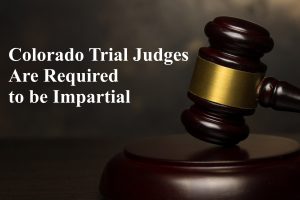 The confusing and sometimes frightening world of the criminal courtroom includes common misperceptions of the role and the power of the trial judge.

One way to try to understand the role of a judge at trial is to imagine two professional boxers in the ring about to do battle. The judge stands between them. As the referee, the judge’s most important task is to make certain that the fight is fair, that the rules are followed, and that no foul blows are struck.

Of course, this analogy is rudimentary. The responsibilities of the trial judge are much more complex as will be discussed in this brief article.

The Due Process Clauses of the United States Constitution and the Colorado Constitution guarantee every criminal defendant the right to a fair trial.

Judges are ever mindful of the sensitive role they play in a jury trial and most well understand that they are required to avoid even the appearance of advocacy or partiality.

Judges are not advocates. While they may have been fighters – “boxers” before they took the bench, they must never act in the dual capacity of judge and an advocate. Their duty of impartiality remains a constant. This duty requires not only that they have no actual bias or personal interest in the litigation, but also that they refrain from taking on the role of an advocate during the course of the trial.

Judges have a unique and strict code of conduct. A judge is required to act at all times in a manner that promotes public confidence in the independence, integrity, and impartiality of the judiciary, and to fastidiously avoid impropriety and the appearance of impropriety.

“Impartial,” “impartiality,” and “impartially” mean the absence of bias or prejudice in favor of, or against, particular parties or classes of parties, as well as maintenance of an open mind in considering issues that may come before the court.

Of course, it is impossible to list all of the kinds of conduct that may compromise or appear to compromise the independence, integrity, and impartiality of a judge.

The test for appearance of impropriety is:

the judge engaged in other conduct that reflects adversely on the judge’s honesty, impartiality, temperament, or fitness to serve as a judge.

To carry the boxer analogy just a little farther, as a referee, the judge cannot “throw any punches” – no matter how one-sided the skill set of the lawyers practicing in their courtroom may appear. A judge may not take the place of the district attorney or the defense lawyer by calling witnesses, presenting evidence, or unfairly objecting to a lawyer’s questioning in a partisan manner.

These are the actions of an advocate, not an impartial judge.

Put differently, a judge may not take an “active role” in the presentation of the case for either side.

A Constitutional Right to Due Process of Law

A defendant’s constitutional right to due process is violated when a judge becomes both prosecutor and judge.  Colorado’s constitution  Section 25 of Article II reads:

When a judge “crosses the line” from impartial judge to partisan advocate during a trial – that judge’s actions are inconsistent with due process of law and the clear mandates and proper function of the judiciary and may require a new trial.

Exception? Assisting the Jury to Clarify the Evidence

There will be times when a trial judge may need to at least appear to cross the line into a kind of affirmative action.  For example, it may be totally appropriate, even necessary, for the judge to clarify testimony and assist the jury in understanding the evidence they see and hear at trial.

While in our criminal justice system, the parties “frame the issues,” a trial judge has the duty to make certain that the facts and evidence in the case are not obscured. This expanded role helps both sides reach the goal of every trial – getting the case to the jury in the fairest and most efficient manner.

The reason this area of law is complex, (and the reason for this article) is that there will be times when a trial judge acts a little more aggressively to control the action and, in doing so, becomes more than just a referee.

At trial a judge is permitted may, for example, participate:

In the examination of witnesses to clarify evidence;
To confine counsel to the Court’s evidentiary rulings;
To ensure the orderly presentation of evidence; and
To prevent undue repetition or duplication of evidence.

That authority to engage more “actively” at trial is broadened further when the judge, not the jury, is the fact-finder – the decision-maker – of the ultimate verdict or verdicts in the case.

A judge’s role at trial may change depending on whether the trial is to a jury to the judge (a “bench” trial). While the due process clauses of the United States Constitution guarantee every criminal defendant the right to a fair trial (which right includes the right to a trial before an impartial judge), in a bench trial – (a trial where the trial judge assumes the role of the jury as the fact-finder and renders the verdict), the trial judge’s role may be expanded further than the Court’s role in a jury trial.

In the recent (2021) Colorado Supreme Court case, (People v. Hall), the Court held that a trial court presiding over a bench trial acts within its authority, and does not abandon its role as a neutral arbiter when it asks the prosecutor and the defense lawyer for additional argument about properly admitted evidence before the judge renders the verdict.

The Court held that the defendant, Levi Derek Hall’s, right to a fair trial was not violated – the line was not crossed from impartial judge to partisan advocate – when the trial judge requested additional argument after closing arguments had ended.

The Court said this:

A court presiding over a bench trial may ask questions it ‘deem[s] necessary to clearly bring out the facts so that the important functions of its office as trier of fact can be fairly and justly performed.

Duty of Impartiality Not Violated

In the Hall case, a “bench trial,” the Colorado Supreme Court pointed out that a trial court has wide discretion in conducting a trial subject to its duty to maintain an impartial forum. That discretion includes exercising control over such critical procedures during the trial such as:

The order and presentation of evidence.

The scope of the closing arguments. (and)

Whether to reopen the case to allow additional evidence and whether to directly question witnesses.

When a defendant decides to try a case solely to the judge, that judge sits as the finder of fact. In that role, the judge has the additional duty to assess the evidence and discover the truth, just as a jury would. In that role, the judge may ask questions it “deem[s] necessary to clearly bring out the facts so that the important functions of its office as the trier of fact can be fairly and justly performed.”

As the fact-finder, a judge has a duty to evaluate the evidence independently and come to their own conclusions.

In this role, the trial court may believe some or all or none of the evidence because, as the factfinder, the trial court’s job is to discern the truth, even if the truth does not cleanly align with either party’s version of the events.

But even in the role as fact-finder, a Court may not “step outside” of its role as a neutral arbiter and into the shoes of an advocate. While sitting as fact-finder a judge has no obligation to agree with either the prosecution or the defense but has a duty to “carefully consider and independently evaluate the properly admitted evidence before it.”

The bar for reversing a verdict as a result of general judicial misconduct during trial is extremely high and difficult to meet on appeal. There must be an ‘extremely high level of interference’ by the trial judge which ‘creates a pervasive climate of partiality and unfairness.’

A judge’s participation justifies a new trial only if the record shows actual bias or leaves an abiding impression that the jury perceived an appearance of advocacy or partiality. A review of a trial judge’s actions must meet the “abuse of discretion” threshold before there can be a reversal of the verdict.

A trial court judge has broad discretion in supervising trials, and his or her behavior during trial justifies reversal only if it abuses that discretion. A trial court abuses its discretion when it acts in a manner that is “manifestly arbitrary, unreasonable, or unfair or when it misapplies the law.”

In an appeal, the defendant must prove that “the trial judge’s conduct so departed from the required impartiality as to deny the defendant a fair trial.”

Summary and Conclusion – Colorado Trial Judges Are Required to be Impartial

A Colorado trial judge must be mindful of the sensitive role that judge plays in either a bench or a jury trial.  Judges must avoid even the appearance of advocacy or partiality. While trial courts retain discretion to oversee trials as they deem appropriate, they are subject to the constitutional limitations demanding that they remain neutral and not infringe upon a defendant’s right to a fair trial.

There will be times when a defendant perceives a trial judge’s conduct as biased. Examples can include:

Excessive questions and sarcastic comments made during the trial;

Obvious impatience with a party or witness – inappropriate displays of irritation;

A skeptical attitude toward the defendant’s testimony; or the

Reinforcement of certain evidence admitted by the government or the defendant.

Criminal defense lawyers may be furious with the acts or omissions of the trial judge in their individual case, but any intelligent trial strategy requires balancing a direct attack on the judge with the ultimate goal of every defendant  – winning the case.

A criminal defense lawyer or defendant who witnesses perceived bias by a judge during a trial must keep in mind that a motion for a new trial (addressed to the trial judge), or a reversal of the verdict (on appeal) is far from guaranteed.  On the contrary, the standard for reversing a verdict because of judicial misconduct during trial is very stringent.

Caution is advised here. To sustain a reversal of a jury verdict, there must be an “extremely high level of interference” by the trial judge which creates “a pervasive climate of partiality and unfairness.”

ABOUT THE AUTHOR: H. Michael Steinberg – Email The Author at hmsteinberg@hotmail.com – A Denver Colorado Criminal Defense Lawyer – or call his office at 303-627-7777 during business hours – or call his cell if you cannot wait and need his immediate assistance – 720-220-227. Attorney H. Michael Steinberg is passionate about criminal defense. His extensive knowledge of Colorado Criminal Law and his 38 plus years of experience in the courtrooms of Colorado may give him the edge you need to properly defend your case.

As a former career prosecutor for Arapahoe and Douglas Counties, he has a unique understanding of the criminal justice system that works to his clients’ advantage to better protect their rights. H. Michael also knows how to talk clearly and very directly to his clients, his adversaries, and to the Court. He uses his life experience, common sense, and straight talk to help clients fully understand and make decisions regarding their options.