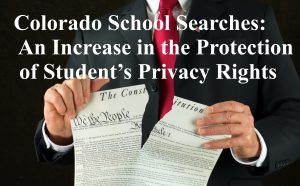 An important decision by the Colorado Court of Appeals in 2021, In the Interest of C.C.-S, for the first time applied the protections of the exclusionary rule to violations of a juvenile’s constitutional rights that were the result of an illegal search and seizure by Colorado school officials.

The Relevant Facts of C.C.-S:

In the case of Interest of C.C.-S the relevant facts were:

1. The student, C.C.-S, was seized by a school security officer and taken to the office in the school-based upon an uncorroborated anonymous tip that school officials would find drugs in his backpack.

2. C.C.-S refused a search of his backpack after being ordered to permit the search by the school authorities.

The Primary Question Addressed in C.C.-S – the Rights of Students

Where there is an illegal seizure of the student’s backpack (and insufficient justification for the search) should the courts apply the exclusionary rule to the evidence illegally seized – suppressing that evidence and making the illegally seized evidence inadmissible at trial?

The State argued that the exclusionary rule should not apply to searches of a student conducted by a school official – the Colorado Court of Appeals disagreed.

The Fourth Amendment prohibits unreasonable searches and seizures and it protects both adults and children by safeguarding every individuals’ privacy and security against arbitrary intrusion by government officials.

But the analysis does not end there. The “reasonableness” of a search or seizure will depend on the context in which the search or seizure takes place – such as in our schools. Fourth Amendment principles weigh the degree to which a violation of privacy intrudes upon an individual’s privacy against the degree to which it is needed for the promotion of legitimate governmental interests.

While in most cases a warrantless search must be based upon probable cause to believe that a violation of the law has occurred – that probable cause requirement is “relaxed” in the school setting to accommodate “the substantial need of teachers and administrators for freedom to maintain order in the schools.”

The standard applied to the privacy rights of children in school setting searches is not probable cause to search but the less stringent reasonableness standard.

Determining the reasonableness of a school search involves a two-fold inquiry.

A school search is reasonable if it is

(1) justified at its inception, and

(2) conducted in a manner “reasonably related in scope to the circumstances which justified the interference in the first place.”

The Open Question – Should Evidence Illegally Seized by School Officials be Suppressed?

Until the case of In the Interest of C.C.- S was decided, it was an open question under Colorado law whether the powerful sanction of the exclusionary rule applied only to searches and seizures by law enforcement officers in the school system or whether it also extends to the actions of school officials.

In its simplest form, the exclusionary rule is a judicially created remedy for deterring illegal searches and seizures. Incriminating evidence of crime discovered through illegal police activity may be suppressed under what is well known as the fruit-of-the-poisonous-tree doctrine.

The exclusionary rule is intended…

to compel respect for the constitutional guaranty in the only effectively available way — by removing the incentive to disregard it.

serves to deter deliberate, reckless, or grossly negligent conduct, or in some circumstances recurring or systemic negligence.

sufficiently deliberate that exclusion (of illegally obtained evidence) can meaningfully deter it, and sufficiently culpable that such deterrence is worth the price paid by the justice system.s

Over time, our courts have lowered the expectation of privacy Colorado students have while attending their classes. The “normal” adult requirement of “probable cause” for a warrantless search was long ago “relaxed” to accommodate “the substantial need of teachers and administrators for freedom to maintain order in the schools.”

The level of protection regarding school searches of students was lowered for young people to the much less stringent “reasonableness standard.”

. . . The warrant requirement, in particular, is unsuited to the school environment . . .

[T]he legality of a search of a student should depend simply on the reasonableness, under all the circumstances, of the search …

Such a search will be permissible in its scope when the measures adopted are reasonably related to the objectives of the search and not excessively intrusive in light of the age and sex of the student and the nature of the infraction.

The watershed United States Supreme Court case of New Jersey v. T.L.O, explains why courts use a “reasonableness standard” to evaluate whether a student detained in violation of that student’s Fourth Amendment rights is applied and not the “probable cause standard.” And while the lower standard may still apply, if it is violated by school officials, the exclusionary rule now apples to attempt to shore up the rights of Colorado students.

With apologies to Bill Maher – here is the New Rule:

The exclusionary rule may now, in the individual case, apply to an illegal searche of a student conducted by a school official. That chnage is consistent with the clear majority of other states that apply the exclusionary rule to the actions of school officials to deter Fourth Amendment violations where there is unlawful “governmental action” such as, in the present case, an illegal search of a child’s backpack.

Illegal searches are often based on anonymous tips. Anonymous tips are often the result of the actions of vindictive and mischievous individuals bent on hurting others. The successful suppression of the evidence in the C.C.-s case was based in large part on a lack of “reasonable suspicion” for the search because the search was primarily based on an unsubstantiated anonymous tip.

Reasonable suspicion for a search must be based on specific and articulable facts known to the officer and the rational inferences drawn from those facts.

Reasonable suspicion exists when facts known to a police officer, together with rational inferences from those facts, create a reasonable and articulable suspicion of criminal activity, which justifies an intrusion into the defendant’s personal privacy.

A Colorado judge is required to carefully examine and balance the anonymity of the tip, its specificity, whether it is stale, and other evidence to determine whether the reasonable suspicion test has been satisfied.

Basically for an anonymous tip to furnish enough reasonable suspicion to justify a search it must be “verified” by enough independent corroborating evidence of a violation of the law or school rules.

Information supplied by an anonymous source ‘may warrant an investigatory stop only if it is verified by sufficient independent corroborating evidence of criminal activity.’

The Issue of Stale Tips – How Old Is the Anonymous Tip?

A quick note – in addition to indicia of reliability, anonymous tips must be sufficiently “fresh” to be reliable. The “staleness doctrine” applies to any examination of “reasonable suspicion”  based on an anonymous tip.

A tip is less supportive of reasonable suspicion after it has gone stale.

While there is no specific time limit on the age of a tip that automatically makes it “stale,” whether the information is stale and therefore unreliable in a case will depend on the factual circumstances and the type of crime under investigation.

Summary and Conclusion – Colorado School Searches: An Increase in the Protection of Student’s Privacy Rights

The seizure of a Colorado student may be justified at its inception if school officials have a reasonable basis to believe that a student has violated the law. But not always. Here, the search of C.C-S.’s backpack violated his Fourth Amendment rights and was not supported by legally sufficent reasonable suspicion.

The primary purpose of the application of the sanction behind an application of the exclusionary rule is to deter governmental misconduct. The rule now includes Colorado school officials. Applying the exclusionary in this context provides further protection for some of the politically weakest of our states’ citizens – our children – and will meaningfully deter conduct by school officials who violate the Fourth Amendment.

ABOUT THE AUTHOR: H. Michael Steinberg – Email The Author at hmsteinberg@hotmail.com – A Denver Colorado Criminal Defense Lawyer – or call his office at 303-627-7777 during business hours – or call his cell if you cannot wait and need his immediate assistance – 720-220-2277. Attorney H. Michael Steinberg is passionate about criminal defense. His extensive knowledge of Colorado Criminal Law and his 35 plus years of experience in the courtrooms of Colorado may give him the edge you need to properly defend your case.