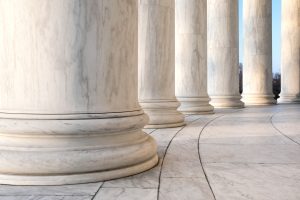 The Federal and State Constitutions give people the right to be free from unreasonable searches and seizures. U.S. Const. amend. IV; Colo. Const. art. II, § 7; A warrantless search is presumptively unreasonable, violating the Fourth Amendment unless it falls under an exception to the requirement
of a search warrant where there is a reasonable expectation of privacy – such as your car.

While the standard of proof know as “reasonable suspicion” is necessary for the police to “dog sniff” your vehicle, the sniff itself is not considered a search. Furthermore, a drug sniffing dog who does “alert” to the presence of illegal drugs in a vehicle can be used to support a finding of probable cause to conduct a legal search of that vehicle.

Reasonable suspicion means the police must have…

“specific and articulable facts, greater than a mere hunch, to support’ their belief that the person to be stopped is or may have been involved in criminal activity.”

A Court determines that reasonable suspicion exists by looking at..

“the totality of the circumstances, the specific and articulable facts known to the officer at the time of the encounter, and the rational inferences to be drawn from those facts.”

The “automobile exception” allows law enforcement with probable cause to believe that the vehicle contains evidence of a crime without obtaining a judge signed warrant.

Finally, both the United States and the Colorado Supreme Courts have ruled that deploying a well-trained drug-detection dog during a lawful traffic stop does not implicate the Fourth Amendment since, again, a ‘sniff is not a search.”

For many years it has been the law that if the police have reasonable suspicion to believe there are unlawful drugs in your car, they would summon a K-9 Unit – Drug Sniffing Dog to the scene to search for drugs.

Dogs trained to detect marijuana as well as other drugs provided the necessary probable cause for a thorough search of the vehicle. If illegal drugs were located, would be seized and the driver and, perhaps, other passengers arrested and charged.

Since The Passage Of Amendment 64 In Colorado – Everything Has Changed

The passage of Amendment 64 legalizing the possession of an ounce or less of marijuana for citizens 21 years and older changed everything. Marijuana has been decriminalized in Colorado. As of 2012 possession is not only not a criminal violation it is also not a civil violation.. Colo. Const. art. XVIII, § 16(3)(a) (Amendment 64

So Exactly What Changed In Colorado Dog Sniff Cases? What Does This All Mean?

Before Amendment 64 a drug sniffing dog trained to alert on the presence of drugs included the then illegal drug, marijuana. When the trained animal performed “an exploratory sniff” on your car and alerted to an unlawful substance, that formed the basis for a “there and then” search of your car.
Your “reasonable expectation of privacy” under the 4th Amendment could be breached and the search conducted under these circumstances.

Are Colorado’s Drug Sniff Dogs Being Retrained To Overcome This Issue?

The District Attorney who argues that the deployment of a “drug sniffing” dog is trained to detect illegally possessed drugs must now “credential the dog and the dog sniff alert” was not in part or in whole, the result of the detection of the presence of marijuana.