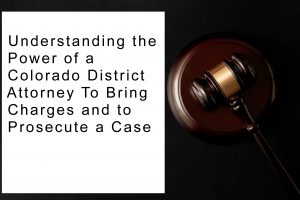 The Power To Prosecute

Colorado’s District Attorneys are elected officials who run for office every four years. Once elected, the District Attorney has almost limitless power to bring criminal charges or not, to plea bargain charges already filed or not, or to dismiss charges that have already been filed.

The District Attorney stands alone as clearly the most powerful figure in the criminal justice system.

Many mistakenly believe that it is Colorado’s Judges that have the most power in the courtrooms of the state. Nothing could be farther from the truth. While Judges are respected and feared for their right to sentence individuals who have been convicted, it is the District Attorney that actually sets the stage for many of the limitations placed on the Judiciary’s power.

What Is The “Charging Decision?”

“Charges” are accusations filed by the District Attorney (or in the case of misdemeanor and traffic matters – by the police). A charge is a legal allegation that the accused has committed one or more crimes in the state of Colorado.

Colorado’s District Attorneys bring criminal charges on behalf of “the People of the State of Colorado,” and while the victim or victims of a crime have considerable input under the Colorado Victim’s Rights Act (VRA) the case is not within their control.

Are There ANY Limitations on a Colorado District Attorney’s Power to Bring Charges?

Here is the rub – while the police are permitted to make an arrest based on the very low standard of “probable cause,” a person cannot be convicted without a level of evidence that is much, much higher, proof “beyond a reasonable doubt.”

Every day in our state, the police cause immeasurable trauma to our citizens by arresting individuals based on probable cause with no chance of a conviction under the higher standard of proof – beyond a reasonable doubt.

Colorado misdemeanor and most felony criminal investigations are conducted by local law enforcement who have no idea how difficult it is to prosecute a case to verdict under the beyond a reasonable doubt standard. They are trained only that their quantum of proof is probable cause.

Probable cause exists where the facts and circumstances within the officers’ knowledge, and of which they have reasonably trustworthy information, are sufficient in themselves to warrant a belief by a man of reasonable caution that a crime is being committed.

Beyond a Reasonable Doubt is:

Reasonable doubt means a doubt based upon reason and common sense which arises from a fair and rational consideration of all of the evidence, or the lack of evidence, in the case

It is a doubt which is not a vague, speculative or imaginary doubt, but such a doubt as would cause reasonable people to hesitate to act in matters of importance to themselves. 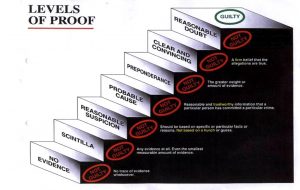 This violation of trust plays itself out each and every day in this state when the District Attorney, in properly evaluating a case, is forced to dismiss for lack of the quantum of proof necessary to persuade a jury that the crime alleged is provable at trial.

The damage to the accused, his or her family, career, good name, and more, by the time a case is dismissed, is unimaginable unless one has been through this terrible process.

The Denver District Attorney, Beth McCann (as of 2021) writes this on her website:

The filing and prosecution decision will be made based upon the specific facts of each case, including the physical evidence, witness statements and expert opinions that could be presented to a jury. These facts are evaluated and weighed against the specific language of the criminal statutes.

This review results in one of these outcomes:

The case may be accepted for the filing of criminal charges
The case may be refused for filing (for example, insufficient evidence)
There may be a request for additional investigative work that is needed before a filing decision can be made
….

The District Attorney has the power to bring higher charges than may be proven at trial – called “overcharging” with a goal of compelling a plea bargain.  Along with that authority is the right to offer life and career-saving “diversion” plea bargains in certain kinds of cases. (Diversion leads to a dismissal of the charges and the right to seek to seal the individual’s criminal history.)

Bail and Sentencing Recommendations to the Judge

The setting of bail – a decision that determines whether someone accused of a crime remains in jail or has the freedom to fight their case while on bond – is often the direct result of the District Attorney’s courtroom recommendations. While Colorado has made great headway in this area in their relatively recent and more progressive approach to the setting of bail, the “DA” still has an extreme impact on the Judge’s decision on issues related to bail.

Finally, since 90 percent or more of all Colorado criminal cases result in a plea bargain which the judge will typically accept, the District Attorney in this area has an immeasurable influence on the breadth of the sentencing judges’ discretion in the imposition of the possible sentence. Often the plea bargain itself is structured to “box” a judge’s discretion to a very narrow range of possible sentences based on the other issues discussed in this short article.

While I and many others have written these words before, for the person being prosecuted in an unfair and totally unjust prosecution, a thorough understanding of the powers of the District Attorney cannot be easily be fathomed by those not accustomed to the unequal balance of power in the Colorado criminal justice system.

The decision of whether a person goes to prison, or jail, or receives probation or the gift of diversion, or whether a crime was even committed at all, gives the DA powers that are essentially unreviewable.

The only limitation on this grant of power is the defendant’s criminal defense lawyer…. choose wisely and examine each and every one of your options carefully if you find yourself in this dangerous and life-changing position. HMS