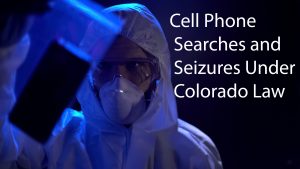 Introduction – Basic Law -Your Right to Privacy – The Fourth Amendment

To fully understand when and under circumstances law enforcement may search your cell phone, one must start with an understanding of your basic rights under the Fourth Amendment’s protection against unlawful searches and seizures.

The Fourth Amendment to the United States Constitution protects individuals against unreasonable searches and seizures.

“The right of the people to be secure in their persons, houses, papers, and effects, against unreasonable searches and seizures, shall not be violated, and no Warrants shall issue, but upon probable cause, supported by Oath or affirmation, and particularly describing the place to be searched, and the persons or things to be seized.”

So what is an “unreasonable” search and seizure?

A search that is conducted pursuant to a lawfully issued search warrant normally meets the reasonableness requirement under the Fourth Amendment.  On the other hand, certain search warrants commonly referred to as “general warrants” that permit “a general, exploratory rummaging in a person’s belongings,”  are deemed unreasonable under the Fourth Amendment.

Search warrants must be carefully limited to the specific items that are supported by the evidence provided in the affidavit in support of the search warrant.

Our Supreme Court Justice Roberts has said cell phones contain: “A digital record of nearly every aspect of our lives…” The Colorado Supreme Court has recognized that cell phones “hold for many Americans the privacies of life” and are therefore entitled to special protections from searches.

The Cell Phone and the Fourth Amendment

As we, as a society, become more technologically complex, the meaning and scope of the Fourth Amendment to the U.S. Constitution, enacted more than 200 years ago, has struggled to “keep up” with those technological changes. The fundamental purpose behind the 4th Amendment’s right to privacy as protection against government intrusion into our personal lives without legal justification is challenged by our progress.

Cell phones present one of the most complex challenges to our right to privacy.

This article addresses only one of those challenges,.. the right of the government to compel an individual to provide access to their cell phone by defeating the privacy “locks” on the data contained on those phones such as passcodes or biometric methods of opening the phone.

The kind of particularity required in a search warrant to search a person’s cell phone was recently analyzed by the Colorado Supreme Court this year in Coke v People. The search warrant in the Coke case was held to be unconstitutional because it permitted the kind “general search” of a cell phone considered to be “overbroad” in its scope and the warrant, therefore, failed the “particularity requirement” of the 4th Amendment.

In the Coke case, the search warrant permitted a search of all texts, videos, pictures, contact lists, phone books, phone records, electronic data packets, and data showing ownership or possession on the cell phone – essentially it permitted a search of virtually the entire contents of the defendant’s phone.

The search warrant did not limit, as the Court pointed out, the search of the cell phone to specific evidence supported by the affidavit in support of the warrant. It was not limited to:

Information about the victim of this alleged crime.

A specific time period for the commission of the crime.

The search warrant in Coke was a textbook example of a “general search warrant.” The warrant provided for a search for all of these items:

Data which tends to show possession, dominion and control over said equipment; including but not limited to system ownership information, phone number, pictures, or documents bearing the owners name or information;

Any electronic data that would be illegal to possess (contraband), or fruits or proceeds of a crime, or data intended to be used in the commission of a crime;

Any photographs or images stored, sent, received or deleted;

This kind of such broad authorization violates the particularity requirement demanded by the Fourth Amendment and is, therefore “unreasonable”. As a result since “[t]he principal means of effectuating the [particularity] requirement is to suppress all evidence seized pursuant to an overbroad, general warrant” the evidence seized from the cell phone was suppressed.

In the Coke case, the defendant also alleged that the police violated her 5th Amendment right against self-incrimination by compelling the disclosure of the passcode to her phone. The Court held that, because Ms. Coke was not in custody when she disclosed the passcode and turned over the code voluntarily, there was no violation of her Miranda rights and therefore the 5th Amendment was not at issue. (Under the 5th Amendment the right attaches only when a defendant is subjected to questioning while in custody – custodial interrogation.)

The bottom line on this issue is that if you do not wish to have your cell phone searched, do not agree to provide the passcode or ANY biometric access to your cell phone.

When a person consents to voluntarily provide access to their cell phone there is no longer a need for the police to obtain a search warrant. That person has “waived” their 4th Amendment rights under the Constitution. Under every state’s law when asked for permission to search anything you own you have the right to refuse and should do so respectfully. This right includes, but is not limited to, your person, your effects, your car, and your home.

The issue remains if a defendant refuses to provide access to their cell phone, what happens next?

Compelling Access – Can You Be Forced to Unlock Your Phone?

Can the police compel you to unlock your cell phones using biometric means assuming the police have lawfully taken legal possession of your phone?

In 2018, a Florida man, William Montanez, was jailed for 44 days because he intentionally refused to comply with a judge’s order to provide the police his cell phone’s passcode. Montanez appealed and an appeals court ordered Williams released.

While the issue in the Montanez case, compelling a verbal reveal of one’s cell phone passcode is clear, compelling a person to verbally reveal their passcode is clearly testimonial under the 5th Amendment and therefore amounts to self-incrimination. (The 5th Amendment to the U.S. Constitution says that no one “shall be compelled in any criminal case to be a witness against himself … “)

The more complex issue is whether a person can be compelled to provide access to their cell phone using their biometric data? Can a Court order for non-testimonial evidence be used to bypass the biometric locks on your cell phone such as fingerprint and facial recognition scans – biometric data?

While one can refuse to tell police the passcode combination to your cell phone if the phone unlocks with facial or fingerprint recognition, can the police obtain a court order to obtain that information?

A Court Order for Non-Testimonial Identification (41.1 Order) may be obtained by a law enforcement officer from a judge or magistrate. The court orders a suspect to undergo forensic evidence collection.

A request for a nontestimonial identification order may be made prior to the arrest of a suspect, after arrest and prior to trial or, when special circumstances of the case make it appropriate, during trial.

There is probable cause to believe that an offense has been committed;

There are reasonable grounds, not amounting to probable cause to arrest, to suspect that the person named or described in the affidavit in support of the requested order committed the offense; and

That the results of specific nontestimonial identification procedures will be of material aid in determining whether the person named in the affidavit committed the offense.

The protections provided by the 5th Amendment do not apply to non-testimonial “physical” evidence such as fingerprints, hair, and skin samples. The emerging question, as yet unclear, is whether the compelled decryption of a cell phone using a person’s biometric data is also non-testimonial.

One California Judge analyzes the issue as follows:

“The undersigned finds that a biometric feature is analogous to the 20 nonverbal, physiological responses elicited during a polygraph test, which are used to determine guilt or innocence, and are considered testimonial.”

The law in this area may not be resolved until a case has been appealed to the United States Supreme Court. On the other hand, a case decided under Colorado’s constitution, may decide the issue for the state of Colorado irrespective of a decision of the Court of Last Resort on this issue.

A Moot Point? – Cracking the Code Through Technological Advances

Former 18th Judicial District Attorney George Brauchler has answered the issues in this piece with the hard truth that there really is no need any longer to demand a passcode from a suspect.

He is right. With a Court order to search a cell phone, law enforcement may now turn the cell phone over to technology experts who may then legally ‘hack the phone.’

Many Colorado District Attorneys use the services of private companies that have the capacity to crack nearly every cell phone using proprietary technology.

If that is true, what is left to defend these cases? The answer is this, as the Colorado Supreme Court recently reaffirmed in People v. Thompson (decided in February of 2021), a search warrant authorizing a search of a cell phone, as noted above, must be “particularized” to the case.

When the police rely on a search warrant issued to permit downloading the contents of a suspect’s cell phone, it must comply with the Fourth Amendment’s warrant particularity requirement or that information will fall subject to a properly filed and aggressively litigated motion to suppress.

Our cellphones contain the story of our lives and we have a right to protect the privacy of our lives from government intrusion.  As the Colorado Supreme Court made clear in the Thompson case:

“…. cell phones have ‘immense storage capacities’ and can ‘collect and store many distinct types of data in one place.’ We have further noted that because cell phones ‘hold for many Americans `the privacies of life,” they are entitled to special protections from searches.”