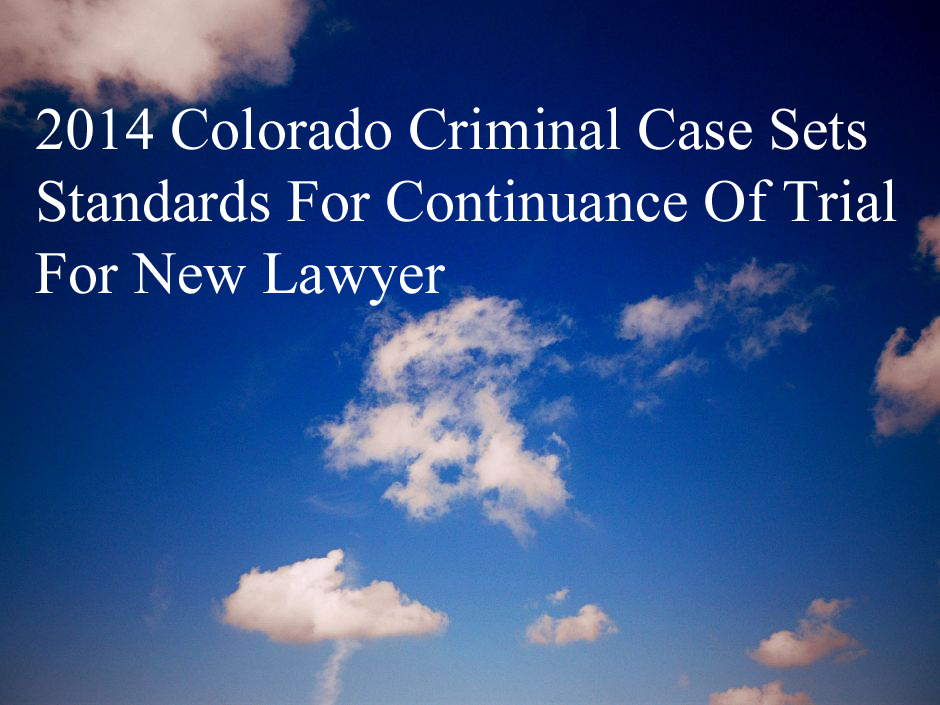 In 2015 the Colorado State Supreme Court carefully and logically set out the standards – the tests – to be applied by Colorado State Judges in deciding whether or not to grant a continuance of a criminal trial for a Defendant to fire his present lawyer and retain a new lawyer.

In People v. Brown, 2014 CO 25 (April 7, 2014), Justice Brian Boatright held that a trial judge must apply a “balancing test” to a Defendant’s Sixth Amendment right to seek and obtain a continuance of a criminal trial.

In the Brown decision – the Colorado Supreme balanced the Sixth Amendment constitutional right to his or her counsel of choice against the public’s interest in the fairness and efficiency of the judicial system.

The test itself in determining whether to allow a defendant to change counsel will turn on the application of “a multi-factor balancing test.”

The Court of Appeals laid out these 4 considerations:

The Colorado Supreme Court Expands The List of Tests a Trial Judge Must Now Apply To “Balance”A Defendant’s Sixth Amendment Right To Seek And Obtain A Continuance Of A Criminal Trial.

The Colorado Supreme Court reversed finding the lower Colorado Court of Appeal and added several more factors to what the higher court considered to be tests that were too restrictive and too mechanical.

The Following Tests Are Now The Law In Colorado Instead a trial court should consider:

2. the availability of chosen counsel;

3. the length of continuance necessary to accommodate chosen counsel;

4. the potential prejudice of a delay to the prosecution beyond mere inconvenience;

5. the inconvenience to witnesses;

6. the age of the case, both in the judicial system and from the date of the offense;

7. the number of continuances already granted in the case;

8. the timing of the request to continue;

9. the impact of the continuance on the court’s docket;

10. the victim’s position, if the victims’ rights act applies; and

11. any other case-specific factors necessitating or weighing against further delay.

No SINGLE FACTOR is enough – (dispositive) and the persuasive weight of any ONE FACTOR will vary depending on the specific facts at issue in the case. Trial judges are now forced to make SPECIFIC FINDINGS that would permit a higher court to review the trial court’s decision.

This is now the law in Colorado and will be applied by all Colorado Criminal Defense Lawyers in the cases where they are asked to enter and defend a case already set for trial. – H. Michael Steinberg