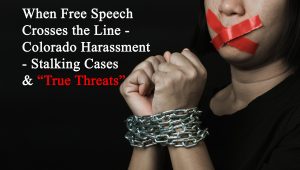 When individuals in relationships are either in the time frame immediately prior to a break-up or in the emotionally confusing time during the break-up itself, communications between the parties can sometimes become “complicated” and the government made intrude on the lives of those individuals in the form of criminal charges.

Text messages, voicemail messages, Facebook and Instagram posts, emails, and the like may, at times, cross the line between constitutionally protected free speech under the First Amendment and unprotected speech punishable by Colorado’s harassment and stalking laws.

Colorado criminal law has struggled to help clarify when these communications become “true threats” and therefore are “criminal” and when they constitute “protected speech.”

Two recent Colorado cases address this issue in lengthy and complex decisions. This article will attempt to provide a better understanding of this complex area of Colorado criminal law..

The question in the most recent case, People v. Counterman, was whether the State used Colorado’s stalking law (section 18-3-602(1)(c), C.R.S.) to punish Counterman’s exercise of free speech.

Stalking, under Colorado law, occurs when a person repeatedly contacts, surveils, or communicates with an individual in such a way that a reasonable person would feel serious emotional distress.

The Colorado Court of Appeals, in the Counterman case, applied federal and Colorado law to the statements directed to the alleged victim in the case, (a well known Colorado-based music composer), and held that Counterman’s statements were, in fact, “true threats.”  The Court held that numerous communications to the victim, taken as a whole were unprotected speech under both the First Amendment to the United States Constitution and Article II, section 10 of the Colorado Constitution.

…statements that, considered in context and under the totality of the circumstances, an intended or foreseeable recipient would reasonably perceive as a serious expression of intent to commit an act of unlawful violence,

The elements of the crime of “credible threat” stalking are:

1. That the Defendant,
2. In the State of Colorado, at or about the date and place charged,
3. Knowingly repeatedly followed, approached, contacted, placed under surveillance, or made any form of communication with another person, either directly, or indirectly, through a third person,
4. In a manner that would cause a reasonable person to suffer serious emotional distress, and
5. Which did cause that person to suffer serious emotional distress.

How the Counterman Court analyzed the communications in this case , the legal reasoning they applied and the tests they designated, provide a roadmap to the complex line between protected and unprotected speech under Colorado law.

Limits on the Right to Self-Expression – Colorado Protected Speech Cases and the Concept of “True Threats.”

The United States Supreme Court has made clear that the criminalization of threatening speech is not protected by the First Amendment because such speech causes fear, social disruption, and heightens the risk of future violence.

Protected speech cases are very difficult to analyze for the courts because these cases are highly fact-specific. They turn on the exact evidence of the communications in each case and broad “tests” are difficult to apply to each individual case.

The absence of a clearly defined difference between a “true threat” constitutionally protected speech has dogged police, prosecutors, trial court judges, and juries for decades.

[I]f one First Amendment doctrine screams out the loudest for clarification, it may well be true threats.

Another reason “true threats” jurisprudence, (the philosophy of law), has struggled to provide a framework for legal analysis of an alleged true threat is how to legally analyze the threat itself.

Any analysis in this area includes at least these key questions:

Should the analysis of the threat be viewed from:

The Colorado Supreme Court, in In re: R.D. in 2019 and the Colorado Court of Appeals in Counterman in 2020 held any analysis of the criminalization of speech in the form of “true threats” should be based upon, not the subjective intent of the speaker but the objective impact of the communication on the reasonable target of that communication.

A true threat is a statement that is considered in context and under the totality of the circumstances, an intended or foreseeable recipient would reasonably perceive as a serious expression of intent to commit an act of unlawful violence.

While it is ultimately a question of fact for the fact-finder (the jury) as to whether the State has proven beyond a reasonable doubt, for example, a Colorado charge of Harassment – Stalking – the defense has the right to use the procedural tool of the Motion to Dismiss to seek the dismissal of the case based on a violation of the constitutional right provided to all of us – the First Amendment right to free speech.

In re: R.D. and People v. Counterman provide a framework for a “true threats” “protected speech” analysis.

While analysis of the words used by the Defendant is of course, central to the Court’s task, when determining whether a true threat crosses the “protected speech line” – it is the context in which the statement was made which most often will make the critical difference.

Counterman argued that his statements, although admittedly threatening, did not rise to the level of “true threats” because they weren’t explicit “statements of purpose or intent to cause injury or harm to the person, property, or rights of another, by an unlawful act.”

To analyze whether Counterman’s communications crossed the line of protected versus unprotected speech, the Colorado Court of Appeals, relying on the In re: R.D. case, set out the following analysis of those communications:

As noted, in determining whether a statement is a true threat, a Court must not only examine the words used, it must also consider the context in which the statement was made.

This has been called the “context defense.”

The contextual factors Colorado Courts must consider before finding that words constitute “true threats”  include, but are not limited to the following:

(1) the statement’s role in a broader exchange, if any, including surrounding events;

(2) the medium or platform through which the statement was communicated, including any distinctive conventions or architectural features;

(3) the manner in which the statement was conveyed (e.g., anonymously or not, privately or publicly);

(4) the relationship between the speaker and recipient(s); and

(5) the subjective reaction of the statement’s intended on the foreseeable recipient(s).

The reader is directed to the Counterman decision for analysis of the exact words used by Counterman. The broader inquiry presented here is to focus on the tools used and the questions asked by the Court to analyze the accused’s communications.

When addressing the communications that are alleged to be true threats,  the Colorado Court of Appeals instructed that a judicial review of the alleged threat should include the following inquiries:

Does each statement internally “heighten its credibility”

Did the speaker say or do anything to undermine the credibility of the threat or threats?

The analysis is much broader than these initial questions.

The Counterman Court, after scrutinizing the communications at issue, expanded the analysis to include the following important observations in support of their finding that Counterman had crossed the “protected speech line” escalating his communications to unprotected “true threats”:

The Counterman case established that even in the absence of a specific threat, the importance of the context in which a statement is made can rise to the level of a true threat.

The importance of the Counterman and R.D. cases is they provide a framework for analysis that is based on the context of the statements, not necessarily the statements alone.

Lawyers and authors Lyrissa Barnett Lidsky and Linda Riedemann have provided clarity in this area in their law review – #I????U: Considering the Context of Online Threats. This comprehensive piece helps criminal defense lawyers defend alleged “true threat” based crimes such as the Colorado crimes of harassment or stalking.

Social media has changed our world. It has provided a test the framers of our constitution could never have foreseen. The potential for the criminalization of speech has also grown exponentially.

Innocent words can be misunderstood and opinions misconstrued as defamatory.

The idea behind a“context defense” is that it permits a defendant to produce “contextual evidence” initially to the Court (the motion to dismiss (and later to a jury at the trial, to literally “contextualize” alleged true threats by separating “criminal” threats from “protected speech” and “[providing] a safeguard against erroneous convictions of speech protected by the First Amendment.”

ABOUT THE AUTHOR: H. Michael Steinberg – Email The Author at hmsteinberg@hotmail.com – A Denver Colorado Criminal Defense Lawyer – or call his office at 303-627-7777 during business hours – or call his cell if you cannot wait and need his immediate assistance – 720-220-227. Attorney H. Michael Steinberg is passionate about criminal defense. His extensive knowledge of Colorado Criminal Law and his 38 plus years of experience in the courtrooms of Colorado may give him the edge you need to properly defend your case.

As a former career prosecutor for Arapahoe and Douglas Counties, he has a unique understanding of the criminal justice system that works to his clients’ advantage to better protect their rights. H. Michael also knows how to talk clearly and very directly to his clients, his adversaries, and to the Court. He uses his life experience, common sense, and straight talk to help clients fully understand and make decisions regarding their options.