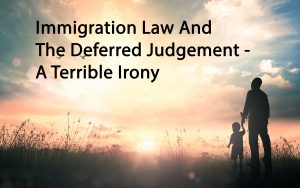 The clash between the criminal law of states, such as Colorado, and federal immigration law has never been more stark than a silent crisis now occurring all over the United States. A crisis of such proportion that Colorado Supreme Court Justice Richard Gabriel recently said, in addressing this issue, “Justice screams for a remedy here.”

The crisis is this, a non-citizen charged with a crime, as a result of a clash of state and federal laws, is compelled to reject the gold standard of plea bargain offers, the “first offender” agreement known as a deferred judgment and sentence and instead must plead guilty to a much harsher plea bargain …or face deportation.

The reason for this Hobson’s choice (a free choice in which only one thing is offered) will become plain to you as you read on.

A “deferred judgment and sentence” is a plea bargain that is commonly offered to first offenders as a kind of “clean slate” offer that provides an opportunity to start over after having made a mistake that has led to the filing of a criminal case.

By definition, a “deferred judgment” (a “DJ and S”)  is an enforcible contract. If the “DJ and S” is successfully completed, Colorado law requires dismissal of the criminal case followed by a statutory right to seal the case – the right to remove the entry regarding the case from one’s criminal history.

This anomaly, which occurs at the intersection of state law and federal immigration law, requires a person seeking citizenship to reject a DJ and S offer which is almost universally accepted by all others similarly situated. This anomaly compels non-citizens to agree to a criminal conviction, or face deportation.

This little-understood conflict of laws is quietly destroying the lives of families all over the county and is the subject of this brief article.

A deferred judgment, known in many states as “an adjournment in contemplation of dismissal,” is a plea bargain that requires a defendant to formally pleads “guilty” to criminal charges followed by certain conditions (such as alcohol or drug treatment, community service, or other classes and tasks) for a precise and stipulated period of time.

The benefit of the successful completion of the “DJ and S”, is that at the end of the period of time usually a year or more, the guilty plea is withdrawn, the case is dismissed and the record is almost always sealable.

Only then, must the trial court enter the “judgment” and impose a sentence.

Enter the Monster – Interpretation of the Word “Conviction” Under Federal Law

In the world of federal immigration law, accepting an offer and pleading to a deferred judgment and sentence at the state level, and notwithstanding the intent of the deferred judgment law and the policies underlying the law, is interpreted as a “conviction.”

One would think that the legal term “conviction” would universally have only one meaning.

The word conviction has different meanings depending on the case and the jurisdiction. A conviction is defined under federal immigration law differently than by the state of Colorado. Lawyers practicing immigration law will tell you that state law does not control decisions by the courts of their world.

Under federal law pleading to a “deferred” is a considered an “overt admission of guilt.”  Because the plea is technically a formal judgment of guilt, it triggers the application of an unyielding and draconian federal immigration statutory scheme – the Immigration and Nationality Act – (or the INA).

Regardless of how Colorado law treats a successfully completed deferred judgment and sentence agreement, a “finding or admission of guilt, or admission of facts sufficient,” are convictions in perpetuity under immigration law.

Section 101(a)(48) of the Immigration and Nationality Act (the INA) broadly defines the term “conviction” as:

..a formal judgment of guilt of the alien entered by a court or, if adjudication of guilt has been withheld, where

(i) a judge or jury has found the alien guilty or the alien has entered a plea of guilty or nolo contendere or has admitted sufficient facts to warrant a finding of guilt, and

(ii) the judge has ordered some form of punishment, penalty, or restraint on the alien’s liberty to be imposed.

(1) It must be clear that the conduct in question constitutes a crime or misdemeanor under the law where it is alleged to have occurred.

(2) The alien must be advised in a clear manner of the essential elements of the alleged crime or misdemeanor.

(4) The admissions must be free and voluntary.

A deferred, under this very broad definition of a conviction, is not a deferred at all and it exposes the accused non-citizen to:

The Answer: “True” or “Pure Diversion”

What is the solution to this problem? – compassion of course, but an agreement on the part of the district attorneys to “true” or “pure” diversion is the fix.

The Model Penal Code describes true diversion programs as a way to:

“… hold the individual accountable for criminal conduct when justice and public safety do not require that the individual be subjected to the stigma and collateral consequences associated with conviction.”

True or “pure” diversion, operates exactly like a deferred judgment and sentence. The agreement contains the same requirements of accountability and rehabilitation.

In every jurisdiction in Colorado, there are two primary types of criminal case diversion programs:

The Deferred Judgement and Sentence (DJ and S)

We have already discussed the DJ and S.

Pure diversion, sometimes called a “deferred prosecution,” involves an agreement between the prosecutor and a defendant where the charged individual, upon successful completion of certain terms and conditions,  earns the right to a dismissal of the case.

Pure diversion is, essentially, an agreement not to prosecute (“nolle prosequi”). The key to the agreement is there is no requirement to plea guilty as compared to the other diversion type offer – the deferred judgment and sentence.

Put a little differently, a deferred prosecution as a “pre-plea disposition,” requires neither a plea of guilty nor evidence of guilt provided as a condition of the agreement. Therefore it is not a “conviction” – defined under federal law as “a formal judgment of guilt of the alien entered by a court” and it is not “sufficient finding of support for a conclusion of guilt and the imposition of some form of punishment.”

A deferred prosecution does not qualify as a conviction under immigration law.

A deferred judgment and sentence, by comparison, requires both a plea of guilty and evidence of guilt before a court can defer judgment and place the defendant on probation.

Understanding the essential issues at this point, you may ask why Colorado prosecutors very rarely make a pure diversion offer to help the accused avoid deportation?

The answer is simple, the policy position of Colorado’s elected district attorneys is, as I have heard it stated, to offer all individuals similarly situated, a uniform offer. Having served as a Senior Deputy District Attorney for over a decade in the ’80s and ’90s I fully comprehend the policy. It is actually written in the ethical standards applied to all prosecutors.

The intention of the ethical standard in this context is to avoid unwarranted disparities and to further the goal of uniform treatment of similarly situated defendants.

The playing field is simply not level.

Prosecutors are the most powerful players in the American criminal justice system. District attorneys control the direction and outcome of all criminal cases. This power is exercised most dramatically through charging and plea-bargaining decisions.

While the most common cultural view of the DA is the person banging the podium in the courtroom calling for justice in the form of a conviction, the actions of the DA that have the greatest impact and the most serious consequences are not in the courtroom. The decisions having the greatest impact on the daily lives of all of us are the charging and plea-bargaining decisions made behind closed doors, well out of the view of the public.

One of those decisions, to offer pure diversion to non-citizens as a remedy intended to avoid the terrible consequences of mandatory deportation, is immensely unpopular to the voters who elect Colorado district attorneys, and therefore it is a political third rail issue and the diversion offer is almost never conveyed.

You must make a responsible choice for a Colorado Criminal Defense Lawyer – we encourage you to look at our firm. H. Michael has studied and written about nearly every area of criminal law, procedure, trial, and courtroom practice. He is passionate about getting the best result in each of the cases he defends. By studying the law and writing these articles, he hopes to not only master the law but help you in your understanding of your case in some small way.