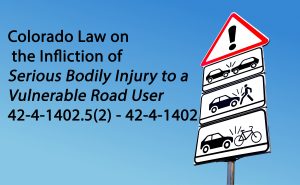 The new charge, an enhanced form of careless driving, reads as follows:

Defendant unlawfully drove a motor vehicle in a careless and imprudent manner without due regard for the width, grade, curves, corners, traffic, and use of the streets or highways and all other attendant circumstances and the defendant’s actions were the proximate cause of serious bodily injury to a vulnerable road user; in violation of sections 42-4-1402.5(2) and 42-4-1402, C.R.S.

While the law primarily seems to be directed at automobile/bicyclist collisions, it identifies several other vulnerable road users to include:

(f) A person lawfully using any of the following on a public right-of-way, crosswalk, or shoulder of the roadway:

An important definition related to the law is the definition of serious bodily injury:

The enhanced penalties as outlined in the law are the result of the creation of a new class 1 traffic misdemeanor – C.R.S. 42-4-1402.5, which, as noted, apply to a driver who is charged under the law.

A person convicted of careless driving causing serious bodily injury to a vulnerable road user is subject to the following penalties:

12 points assessed against the driver’s state-issued license- which results in the loss of a driver’s license for most Colorado drivers.

The requirement of a driver improvement course.

The payment of restitution.

A Bill is Signed into Law

At the signing ceremony, Colorado’s Governor Polis of course painted the law in a predictably one-sided way.

“We want Colorado to be safe for people to get around,”

Like all sound bites, the impact of the law is far broader than represented and never as simple as it would seem.

A Closer Look at Mental States and Colorado Criminal Law

Typically criminal culpability focuses primarily on the mental state of the person involved in a serious accident then the impact of their crimes follows, and not the other way around.

Careless driving, as I have described in other articles, requires that the accused have the mental state of simple negligence– the lowest mens rea or criminal mental state necessary to prove the commission of a crime.

Careless driving is a kind of negligence “catch-all” traffic offense for the actions of a driver that are not perfectly performed under Colorado’s traffic laws. A traffic officer’s favorite charge because of the blurred lines in the elements of the charge, careless driving has always been a four-point penalty assessment (as assessed against a defendant’s driver’s license).

When you compare the four-point careless driving charge to reckless driving – an eight-point – habitual traffic offender crime this makes sense.

Reckless Driving: Any person who drives any motor vehicle, bicycle, or motorized bicycle in such a manner as to indicate either a wanton or willful disregard for the safety of persons or property is guilty of reckless driving .

Careless driving: – Defendant unlawfully drove a motor vehicle in a careless and imprudent manner without due regard for the width, grade, curves, corners, traffic, and use of the streets or highways and all other attendant circumstances

With the passage of this law, if a driver is convicted of this class 1 misdemeanor traffic crime (even with a pristine traffic record) that driver will lose his or her right to drive. The privilege to drive will be rescinded, not based on their mental state as a driver, but based almost exclusively on the injuries sustained by the person (pedestrian/ “vulnerable road user”) injured in the accident.

It is obvious that the new law was passed with the best of intentions, however, it is unfortunate that the law leaves no room for a consideration of the driver’s mental state at the time of the accident before removing the driver’s right to drive.

Colorado’s criminal codes and the criminal codes of other states do not provide for “comparative negligence,” – a civil legal theory that balances the actions of one party as compared to that of the other.

Comparative negligence allows a judge or jury, whoever is the factfinder at trial, to weigh the reasons behind the accident and to take into consideration the relative fault of the parties, if that fault is shared.

Unfortunately, criminal law provides for a zero-sum game – the accused is either guilty or innocent, the crime is either proven or it isn’t.

Therefore, a skateboarder/bicyclist/walking pedestrian struck by the side of the road in the dead of night – in pitch black – wearing non-reflective clothing will always be the victim of the negligence of the driver of the car- no matter how cautious the driver was being.

In the field of criminal law, there is simply no vehicle for comparing the actions or inactions of the parties to determine relative fault as exists in civil lawsuits.

While an experienced criminal defense lawyer could argue that the victim’s actions caused or contributed to their injuries hoping the jury will acquit the defendant, that is a very risky strategy at trial. The law, as it existed before these changes, allowed for a more reasoned approach to a resolution of these cases and, as a result of the enactment of the law, the inherent risks of trial have been greatly enhanced.

One state, the state of Wisconsin, actually spells out the cold, hard impact of the law in this area in the following clear and precise jury instruction on this stark policy:

Finally, as always, the best intentions of the Colorado State Legislature underlying this law will be left to the judgment of the (sometimes inexperienced) district attorneys assigned to these cases. Their decisions will no doubt have a massive impact on the lives of those unfortunate enough to find themselves across the table charged with the new law in our states’ county criminal courts.

If you found any information I have provided on this web page article helpful please share with others over social media so they may also find it. Thank you.