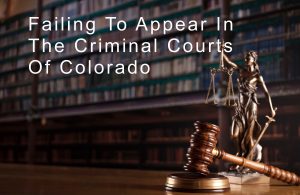 Does Failing To Appear For Court Really Have Serious Consequences In Colorado?

Failing to appear in the Colorado criminal court system IS serious. Unlike missing an appointment with a doctor, lawyer, or dentist, there are serious consequences. This article addresses the nature of failure to appear incidents and what to do if you miss your court date.

No one likes to be charged with a crime, and no one likes to go to court, but a criminal court case is definitely not something you can ignore. The consequences of failing to appear can sometimes actually result in a worse result than if you had simple appeared in court and defended the case.

In short, failing to appear may negatively influence the Judge and or the District Attorney’s opinion of you and that impacts your lawyer’s ability to obtain a good result in your case.

Colorado Judges interpret a persons’ promise to appear in court very seriously. When you sign a ticket, or receive a summons in the mail, given a PR bond by the Judge (personal recognizance sometimes called a “signature bond,”) or when you post your cash or surety bond, you are agreeing to certain terms which are court orders. You are making certain promises to the Judge, which have the force of law.

These are a few of those orders:

In some cases there may also be other conditions such as:

No contact with the victims or witnesses, no use of alcohol or controlled substances, GPS monitoring, substance abuse monitoring, and similar conditions may be imposed.

If you fail to appear for a court date, a BENCH WARRANT issues for your arrest. This can mean, depending on the case, that the police will be actively looking for you to take you into custody.

Armed with a bench warrant, the police not only have the right, night or day, to come to your home, your place of business or any where you can be found such as your school or college, to arrest you, they are ordered to do so.

Your name is also added to the NCIC- CCIC criminal statistics database and you will be considered a fugitive and if you are identified by the police, such as in a traffic stop or at the airport, you will be arrested.

Many FTA warrants are “no bond warrants” which means that if you are arrested you are held without the right to post bond until you see the Judge in your case.

There will be times when you are simply prevented from making a scheduled court date. If you find yourself in this situation, and if you have a criminal defense lawyer to represent you, your lawyer can contact the Court BEFORE your scheduled court and either move it up in time or delay the court date to a different date.

Judges are people with pressing matters in their lives. They understand that sometimes emergencies can supplant scheduled court dates in terms of importance. Your lawyer can help “head off” a court failure to appear and at the same time demonstrate to the Judge that you care about the case to take every court appearance very seriously.

A Colorado Judge who is faced with enforcing his or her order to come to court will examine the seriousness of the criminal charge when deciding to issue a bench warrant and setting the terms of that warrant – such as the amount of bond or the issuance of a “no bond” bench warrant.

Failures to appear on a serious felony charge involving a badly injured victim foe example are taken much more seriously than failing to appear for a minor traffic ticket. In either case, a bench warrant issues and the person is arrested on the terms of the warrant.

Any “writ,” such as a bench warrant issued by a Colorado Judge, has the force of law and the results can be devastating. The refusal to appear in court when ordered resulting in a bench warrant is public information and it is added to your criminal history, permanently.

The well understood and accepted purpose of a bench warrant is deterrence, that is to deter Defendants from violating Court Orders. Deterrence as a matter of judicial policy is almost always enforced with some form of punishment.

While Colorado does not file a new crime that covers failing to appear (such as in other states – California for example) – you are considered to be in “contempt of court” when you fail to appear for court because you are disobeying a Court Order to appear. As noted, this affront to the dignity of the Court is punished by the issuance of another Court Order – a bench warrant.

Colorado law provides for statutory punishments for “contempt of court” and these include a fine, a jail sentence, or both, and these potential penalties are in addition to sentencing for the original crime if you are later convicted at trial or plea guilty to a lesser offense.

What Are The Possible Consequences If I My Colorado Court Date?

“OK I Get It: So What Should I Do If I Missed My Court Date?”

If you fail to appear and it is a serious criminal case such as felony or a serious misdeanor such as assault or menacing – domestic violence, you should retain a lawyer to set up a ” voluntary surrender” for the purpose of readdressing bond. Sometimes this can be done without being processed through the jail by doing an “add on” to the specfic courts normal docket.

Do Not Wait – Act NOW

If you or your lawyer are going to try to explain to the Judge exactly WHY you failed to appear and then ask that the warrant be “quashed,” delaying for any significant time undercuts the persuasive impact of your case, whatever that case may be.

Always, remember that Judges are human, usually with families of their own, and they understand that mistakes can happen. Trust that most Judges will understand and exercise compassion if there are good reasons for your failure to appear.

On the other hand, if a court date is missed and an FTA warrant has issued, when you appear in the courthouse or the courtroom involved, you may be taken immediately into custody by the police – sherif in the courtroom. It is that very real and justifiable fear of an impending arrest that is obviously a strong disincentive for the person wanted on the FTA warrant.

I would recommend you take that chance and “come clean” with the court and allow your lawyer, the public defender – or if you do have a lawyer – you, yourself, explain to the Judge why you failed to appear and ask for the Court’s forgiveness for the mistake.

It is far better to risk the Judge’s ire than waiting for that inevitable knock on the door in the middle of the night or to have that feeling we all know so well when you see police lights behind you and hear that siren coming up to your vehicle.

No Statute of Limitations For Failure To Appear Bench Warrants

Waiting or hiding from this situation in the belief that a bench warrant will somehow “go away” is a mistake. Colorado does not have a statute of limitations when it comes to a bench warrant. Bench warrants do not expire in Colorado. FTA warrants may remain outstanding for many decades after they are issued.

If you were forced to leave the state after the start of a criminal case, there is no risk or any danger in speaking confidentially with a Colorado criminal defense lawyer who can assist you in returning to Colorado and resolving the matter.

What Are Some Law Based – Or Persuasion Based Defenses – To The FTA Arrest Warrant?

Lack of knowledge, true lack of knowledge of the court date, may be a strong argument to quash a warrant. If you have moved, been evicted, someone withheld your mail or the mail was simply never delivered informing you of your court date – any or all of these fact patterns may be sufficient to convince your Judge to be lenient if you fail to appear in court.

Having worked in the criminal court systems of two states for almost 40 years, I have seen Court clerks, overwhelmed with the volume of cases they must process, fail to inform the Defendant of the next court date or perhaps even issuing the wrong notice in a given case. It happens.

I have also often seen police offices confuse a court date on a summons or write the wrong information in some other way on the ticket – which is essentially a court order to appear in court on a certain day and time.

These mistakes amount to almost certain leniency from the Judge upon your surrender.

There will be times when you are prevented from appearing in court because you had to choose between losing your job, taking a loved one to the hospital, or leaving the scene of a car accident. In each of these incidents, sometimes called a choice of evils, you must make the right decision for you or your family as the circumstances warrant. Document the choice and then immediately return to court to explain to the Judge what happened.

Conflicting Court Dates Or Incarceration In Another County Or State

Unfortunately, if you have more than one criminal case, and you have a scheduled court in another court or another state, make certain you inform both courts as far ahead of the conflicting court dates as possible and reschedule one of them.

These events speak for themselves. Let the Court know as soon as possible as to the circumstances.

Obviously you can be prevented from appearing in court because of the weather, a natural disaster, or a car accident. This is known as a force majeure. A force majeure frees a party under a legal obligation when an extraordinary event or circumstance beyond their control such as a war, strike, riot, crime, or let’s say … a pandemic, intervenes.

The legal term literally means an act of God and it’s impact on your obligation to appear is obvious. When you are able, you must appear in court as soon as the intervening force has ended and you can safely do so. Contact the court and let them know your situation.

The one piece of advice in the situation of a failure to appear in a Colorado criminal court case, is that you need to be pro-active. If you or your lawyer asks that a Judge “quash” or “recall” a bench warrant, you will need to act without delay. You will be acting now to prevent what might later to become a traumatic arrest in your own home or if you are stopped by the police for a traffic stop …only then to face a traumatic and very frightening arrest.

If a bench warrant has been issued because you failed to appear in your Colorado criminal case you should contact an experienced Colorado criminal defense lawyer – H. Michael Steinberg – The Steinberg Colorado Criminal Defense Law Firm is available 24 hours a day,7 days a week to take your call if you are in an emergency situation. HMS