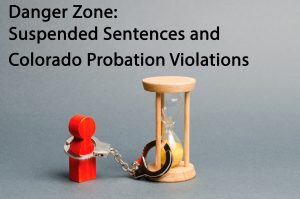 What is a Suspended Sentence?

Sentencing law in Colorado criminal cases can be complex.

One of the most common types of sentences in the Colorado criminal justice system is a suspended sentence. Colorado judges are empowered to impose a suspended sentence to county jail or to prison (Department of Corrections – DOC) following a conviction at trial or as part of a plea agreement which is structured to either permit the judge the right to suspend a sentence or actually requires, by agreement with the defense,  a suspended sentence by the terms of the plea bargain.

When a judge suspends a sentence to jail or to prison and grants probation upon successful completion of the period of probation, the suspended sentence is nullified, cannot be imposed, and the sentence for the crime is considered served.

The Psychological Impact of a “Suspended Sentence” A Powerful Tool

The suspended sentence is a powerful psychological weapon that plays a significant role among the many options available to a Colorado judge at sentencing. The suspended sentence signals a warning to the defendant of what the sentencing court considers to be an appropriate jail or prison term should there be a violation of the terms and conditions of probation.

In my experience, a suspended sentence has a clear impact on the person sentenced.

Colorado Law – Section 18-1.3-401(11) C.R.S. (see below), permits a sentencing court to notify a defendant of the sentence that would be imposed but for the alternative of probation and that the defendant remains subject to that jail or prison sentence in the event of a violation of the terms and conditions of the probationary sentence.

Colorado’s prosecutors, understanding the impact of a suspended sentence, sometimes will agree to probation even in the most serious felony cases (given the presence of substantial mitigating factors), if the plea agreement also includes a suspended sentence. It is a way of somewhat hedging the bet that the defendant may not succeed at probation.

Of course, every plea agreement must be approved by the sentencing judge and is subject to the judge’s final approval. The sentencing Judge retains the ultimate discretion to accept or to reject, any sentence concessions that are a part of the plea agreement.

Colorado law permits a plea agreement to include a conditional sentence suspending the “imposition or execution of [a] sentence for such period and upon such terms and conditions as [the sentencing court] may deem best.” Section 18-1.3-401(11), C.R.S.

Some plea agreements cede complete authority to the judge to impose a sentence this is called an “open” sentence. Usually, an open sentence plea agreement is made in exchange for a plea to a lesser crime.

The benefit of this kind of plea agreement is the plea is to a reduced charge which in turn decreases the defendant’s exposure to a more lengthy sentence. The length of the sentence, in this plea agreement, is left to the discretion of the judge.

An open plea contains all of the elements of the typical plea agreement except the defendant’s final sentence is not fixed at the time of the plea as in a plea agreement where all of the terms are agreed to and the plea agreement “package” is, as a whole, left to the judge to accept or reject as a package deal. (see below)

The primary statute (law) setting the powers of a judge to issue a suspended sentence is found in Section 18-1.3-401. Subsection 11 of that law provides:

When it shall appear to the satisfaction of the court that the ends of justice and the best interest of the public, as well as the defendant, will be best served thereby, the court shall have the power to suspend the imposition or execution of sentence for such period and upon such terms and conditions as it may deem best... Section18-1.3-401(11), C.R.S.

If a person sentenced to probation also has imposed a suspended sentence coupled with and made a condition of their probationary sentence and it is later alleged that there has been a violation of the terms and conditions of their probation, the defendant is returned to the Court for a proceeding called “a probation revocation hearing” based on a “complaint to revoke probation.”

Colorado law provides that ANY violation of the terms and conditions of probation is sufficient to revoke probation.

Question 1. Upon revocation of probation is the judge now required to impose the suspended sentence?

Question 2. Does the answer to Question 1. depend on the “type” of suspended sentence imposed in the case?

The Primary Scenarios – How and When a Suspended Sentence is Imposed

To answer closely explore the answer to the 2 questions posed above, it is important to ask what was the legal basis for imposing the suspended sentence. Suspended sentences are imposed in three basic types of criminal case scenarios.

The “Post Trial Verdict” Suspended Sentence – Finally, did the suspended sentence to probation follow a verdict after a trial?

Put differently, if probation is violated, is the Colorado Judge REQUIRED to impose the suspended sentence?

While the answer to this final question may seem simple – a violation of probation results in lifting the suspension and imposition of the suspended punishment, it was far from clear under Colorado law until the Colorado Court of Appeals decided the recent case of People v. Propst.

Colorado Courts Struggle to Answer the Question of Judicial Discretion

In the recent case of People v. Elisa M. Propst, the Colorado Court of Appeals held that that section 16-11-206(5), C.R.S., which governs Colorado probation violation hearings, provides a sentencing Court, even where there is a suspended sentence, with the discretion to continue probation, revoke probation, or impose any sentence that it might originally have imposed.

(5) If the court determines that a violation of a condition of probation has been committed, it shall, within seven days after the said hearing, either revoke or continue the probation.

If probation is revoked, the court may then impose any sentence or grant any probation pursuant to the provisions of this part 2 which might originally have been imposed or granted.

The Facts of Propst

In the Propst case, the District Attorney charged Propst with one count of second-degree assault and six counts of child abuse. The plea agreement “package” required that Propst plead guilty to the assault charge in exchange for dismissal of the balance of the charges.

The balance of the relatively complex plea agreement in the case, as is typical in Colorado criminal cases, was written in a language understood by the Judge, the District Attorney, and the Defense Lawyer:

Translation – The Defendant will plead guilty to Count 1 of the original criminal complaint – Second Degree Assault the other charges would be dismissed.

The defendant will serve 90 days in the Denver County Jail; will be referred to and must successfully complete the RISE program (*see below) as a condition of the probation sentence; there will be a suspended 6 year Department of Corrections (DOC) and the Defendant will not receive any pre-sentence credit of the jail served prior to the 90 day Denver County jail sentence that is imposed as a condition of the plea agreement.

* The RISE Program (Restoring Individuals Safely and Effectively) is a jail-based competency restoration program established through a collaboration between the Colorado Department of Human Services and the Office of Behavioral Health. It embraces recovery-oriented, trauma-informed care for all patients. The recovery model promotes patient choice and tailors treatment to meet individual needs based on the assessments of a multi-disciplinary treatment team.

At the trial court level, the District Attorney argued that the sentencing Judge was bound by the terms of the original (package) plea agreement and was required, since the Court had accepted the suspended sentence as part of that plea agreement, to impose the 6-year prison sentence consistent with the Frye case (above).

The Propst Court disagreed with the State, contrary to the holding in People v. Frye, 997 P.2d 1223 (Colo. App. 1999), and held consistent with Section 16-11-206(5), C.R.S. (above), provides a sentencing Court, after a finding of a violation of probation where there has been a suspended sentence, is not required to impose the suspended sentence and may:

The Court rejected the argument that the sentencing court’s decision not to impose a suspended sentence was a breach of the parties’ original plea agreement.

But because we have concluded that section 16- 11-206(5) grants the court the discretion to impose any sentence that could originally have been imposed upon a probation revocation, the imposition of a lawful sentence other than prison would not constitute a material and substantial breach of the plea agreement.

The Unfortunate Language of Propst – a Door Left Open

Sadly, the Propst Court added these words to their decision:

We further hold that it is inconsequential whether the suspended sentence was imposed under a plea agreement. The plea agreement here contains no specific language that addresses the probation violation contingency.

Absent such language, the court retained broad discretion to resentence Propst to any sentence that it could originally have imposed under section 16-11-206(5).

It is unclear, moving forward, whether certain language written into a plea agreement providing for the imposition of a suspended sentence would require that sentence be imposed upon a violation of probation.

Criminal defense lawyers must make clear in their negotiated plea agreements not to agree to language that could possibly remove a Colorado judge’s authority to sentence using the many sentencing options within the judge’s discretion.