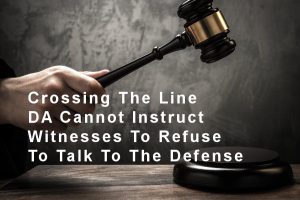 Prosecutors and Defense Lawyers in Colorado criminal cases are legally prohibited from any attempt to barred influence ANY witness or possible witness or source of information, from cooperating with or speaking to the other side to the case.

This includes subtle instructions that amount to a kind of “tribal” warning that they should “choose sides.”

Not only is it unlawful for either lawyer’s team to instruct a witness not to speak to the other side in a case, it is also unlawful for that team to:

● Encourage dishonesty on the part of the witness.

● Draft the witnesses’ testimony by providing things such as a script or specific terms or phrases with the intention of misrepresenting facts.

Witness Preparation is Part of a Lawyer’s Due Diligence

Witness preparation is clearly fundamental to representing a criminal defendant. The goal of any lawyer is to maximize the value of every witness to their cause.

But the lines between preparation and unlawful conduct by lawyers, separating lawful witness preparation from improper advice or “coaching,” have been somewhat blurred over the years.

The Gregory case was a murder trial.  The key issue in the case was whether the Government could prove a link to and identification of the accused. The District Attorney intended to call certain eyewitnesses to the stand on this issue at trial.

When the defense team attempted to interview these witnesses, they were told that they had been instructed by the District Attorney not to talk to the defense team unless the DA was present.

The Court, in the Gregory case, was found to be a violation of the Defendant’s right to a fair trial and stated:

“[w]itnesses, particularly eyewitnesses, to a crime are the property of neither the prosecution nor the defense. … Rather, both sides should have an equal opportunity for access to such witnesses.”

The Court found that the Defendant in Gregory was deprived of this opportunity and therefore was denied due process – a fair trial.

The Colorado Rules of Criminal Procedure specifically prohibit BOTH District Attorneys and Defense Attorneys from advising possible trial witnesses not to participate in investigations.

Neither a lawyer nor an employee or agent working on that lawyer’s behavior such as an investigator may encourage a witness not to speak to the opposing side.

The Rules of Criminal Procedure exist “to provide for the just determination of criminal proceedings.”

“neither the prosecuting attorney, the defense counsel, the defendant nor other prosecution or defense personnel shall advise persons having relevant material or information (except the defendant) to refrain from discussing the case or with showing any relevant material to any party, counsel or their agent, nor shall they otherwise impede counsel’s investigation of the case.”

When in the course of the prosecution of a Colorado criminal case, the District Attorney crosses that important line as described above, the Judge, upon making the appropriate finding, will normally sanction the State as appropriate.

The law requires that the Judge impose the least severe sanction that encourages compliance with the Rules of Criminal Procedure.  There are many options available to the Judge and the sanction should be proportional to the violation committed by the State.

The Judge may sanction the State’s case by

(1) Identifying the testimony from the witness and then instructing the jury that the State instructed the witness not to speak to the Defense team.

(2) Identifying the testimony from the witness sought to be hidden from the Defense team and then suppressing that testimony by that witness so that the jury never hears that evidence at trial.

(3) Dismissing the case, if the violation is very egregious.

For more information on the discovery process, please refer to other articles I have written.