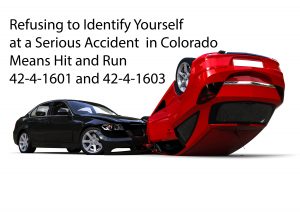 This is a complex area of criminal law. To understand your duty as a Colorado Driver involved in a serious car accident, a closer look at how the criminal law in this area is structured will help you to understand the dangers of making the wrong decision at the scene of a serious accident.

All crimes are broken down into “elements,” which the state must prove beyond a reasonable doubt. With very few exceptions, every crime has at least three elements:

The “Elements” of Colorado Crimes

The goal of a criminal justice system is to determine when someone is guilty of a crime. But the determination of guilt is sometimes extremely difficult.

Merely thinking about committing a crime is not criminal without some additional criminal conduct. The “commission” of a crime refers to the doing of a criminal act – such as firing a gun at a moving car.

On the other hand, as explored in this article, an omission or failure to act, can also be a crime if there is a duty to act imposed by the law. Here the failure to act is also a criminal offense.

An example of this kind of crime is the failure to feed your child, or abandoning or ignoring that child while taking controlled substances. Both of these are failures to fulfill a legal duty and therefore are considered crimes of child abuse under Colorado law.

Making the wrong decision at the scene of an accident, especially a serious accident with injuries, can result in harsh punishment under Colorado law. Several laws apply to actions a driver takes or fails to take, at the scene.

What sometimes happens is a well-meaning passenger, (such as in the Hernandez case below), takes responsibility for the accident and identifies herself as the driver to take the “rap” for the actual driver.

Or, perhaps the driver himself, recognizing that he or she is in serious trouble, refuses to provide the information necessary to be identified as the driver of one of the vehicles involved in the accident and … there are no witnesses who have the ability to identify him as the driver.

What follows is the exact language read to a Colorado Jury at the start of a trial to help the jury  understand the crimes charged:

The charges against the Defendant are contained in what is called an information, an indictment, or a complaint.

The information, indictment or complaint in this case reads as follows:

“The following is a summary of the charges in this case:”

The Defendant has pleaded “not guilty” to the charges. By pleading “not guilty,” the defendant says that he did not commit the crimes charged.

Then, based upon the law which I will explain to you, the jury will decide whether the prosecution has proved any charges beyond a reasonable doubt.

Failure to Fulfill Duties after Involvement in an Accident Involving Injury, Serious Bodily Injury, or Death

The elements of the crime of failure to fulfill duties after involvement in an accident involving injury, serious bodily injury, or death are:

1. That the defendant,
2. in the State of Colorado, at or about the date and place charged,
3. drove a vehicle that was directly involved in an accident,

Section 42-4-1603(1) which is addressed in this special instruction to the jury in this type of case reads:

Failure to Fulfill Duties after Involvement in an Accident Involving Injury, Serious Bodily Injury, or Legal Requirements of Giving Notice, Information, and Aid

-where practical shall render to any person injured in such accident reasonable assistance, including the carrying, or the making of arrangements for the carrying, of such person to a physician, surgeon, or hospital for medical or surgical treatment if it is apparent that such treatment is necessary or if the carrying is requested by the injured person.

A driver does not commit the crime of failure to fulfill duties after involvement in an accident involving injury or death if, after fulfilling the requirements set forth above, he leaves the scene of the accident for the purpose of reporting the accident to a duly authorized police authority.

In the event that none of the persons specified above are in condition to receive the information to which they otherwise would be entitled and no police officer is present, the driver of any vehicle involved in such accident after fulfilling all other requirements, insofar as possible on the driver’s part to be performed, shall immediately report the accident to the nearest office of a duly authorized police authority and give that authority notice of the location of the accident, as well as all information specified above.

If a Colorado driver does not comply with these requirements, he or she can be prosecuted for leaving the scene of the accident under Section 42-4-1601(1) even if they do not leave the scene.

The level of the crime charged in these cases directly hinges on the extent of the injuries suffered by the victims of the accident.

The Colorado punishment for leaving the scene or refusing to identify yourself as the driver (when you were the driver) of an injury-causing accident depends on the extent of the injury:

● If the injury was non-serious, the penalty:

● If the injury involved serious bodily injury, the penalty:

● If the injury involved the death of the alleged victim(s): the penalty:

In the case of People v. Richard Anthony Hernandez, the Colorado Supreme Court held that a defendant may be convicted for leaving the scene of an accident based solely on his failure to identify himself to authorities at the scene as the driver of a vehicle involved in the accident.

The Colorado Supreme Court has held that, as noted above, a Colorado driver who does not comply with these requirements, of identifying themself as a driver in an accident can be prosecuted for leaving the scene of the accident under Section 42-4-1601(1) even if they do not leave the scene.

Sections 42-4-1601(1) and -1603(1), are the statutory provisions that require the driver of a vehicle involved in an accident resulting in injury to others to provide certain information before leaving the accident scene. In Hernandez, not only did the defendant not identify himself as the driver, his girlfriend told authorities that she had been driving the car and he did not correct her statement.

Hernandez and his girlfriend and two other friends had just left a party in Colorado Springs when Hernandez made a left turn and collided with an oncoming car, severely injuring its occupants of the other vehicle.

When it became clear to the defendant’s girlfriend that the consequences of her actions were very serious, she recanted her statement and identified Hernandez as the driver of their car.

The District Attorney then charged Hernandez with leaving the scene of an accident, a class five felony pursuant to section 42-4-1601 for failing to provide the statutorily mandated information under section 42-4-1603(1). The Colorado Supreme Court upheld his convictions.

Defining a “Driver” Under Colorado Law

Section 42-4-1603(1) emphasizes the role of “the driver” of a vehicle involved in an accident resulting in damage or injury occurs, “must stop, render aid as reasonable and necessary, and must provide “the driver’s name,” “the driver’s address,” and the registration number of ” the vehicle he or she is driving. “42- 4-1603(1).

The Reasoning Behind the Law

The reasoning behind the disclosure requirement at the scene of an accident has been identified as “advancing the state’s interest in promoting driver responsibility.” Driver responsibility is promoted by regulating drivers as opposed to passengers or other witnesses. The purpose of the law is not fulfilled where a driver simply provides contact information while obfuscating his role as the driver.

The Hernandez court carved out a clear exception to the disclosure requirements discussed above as follows:

We hold that sections 42-4-1601(1) and -1603(1) require a driver of a vehicle involved in an accident to affirmatively identify himself as the driver before leaving the scene of the accident if that fact is not otherwise reasonably apparent from the circumstances.

But that fact MUST BE reasonably apparent from the facts of the case. When the circumstances or non-verbal conduct of the driver make the driver’s role obvious to those at the scene, the law does not expressly require the announcement “I am the driver.”

If a driver has no memory of the accident, essentially cannot mentally reconstruct what occurred at the scene or following the accident – it may also act as a defense to the accusation that the driver failed to identify himself as a driver. This is most common when there is some type of medical episode such as a heart attack, a seizure, mental health issues such as schizophrenia or dementia, or the kind of concussion that disrupts the normal functioning of the brain.

Another defense to leaving the scene of an accident is an attempt to seek assistance in the absence of a working cell phone and is therefore not present when the police arrive. However, a driver has an ongoing duty to later identify himself as a driver when the first opportunity presents.

If you found any information I have provided on this web page article helpful please share with others over social media so that others may find it. Thank you. HMS