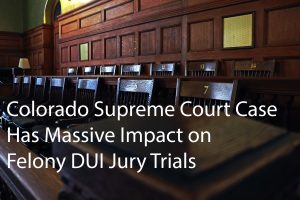 In a very recent decision by the Colorado Supreme Court, Linnebur v. Colorado, the Court decided that to prove a Felony DUI, which requires at least evidence of three prior DUI or DWAI convictions, those “priors” must be proven beyond a reasonable doubt to a jury.

The law, prior to Linnebur, interpreted Colorado’s Felony DUI Law, Section 42-4-1301, as requiring only that the three or more prior convictions have to proved to the judge, and not the jury following the trial for the DUI and a conviction by the jury on the case charged. The burden of proof under the old procedure was the much lower standard of proof  – by a preponderance of the evidence.

In other states the approach to proving a Felony DUI are split in the method of proof they chosen in these case. Some of these states treat the prior convictions as “sentence enhancers” (as Colorado did before the Linnebur decision) and some treat prior convictions as “elements” or part of the proof of the substantive felony as the Court now decides in Linnebur.

The Colorado Supreme Court, after Linnebur,  now places felony DUI’s in the class of offenses such as felony escape, §18-8-208(1), ( felony escape makes the prior felony conviction an essential element of the offense of escape) and the possession of a weapon by a previous offender (“POWPO”) §18-12-108(1) (the POWPO statute requires proof of the predicate  felony crime is an element of the substantive offense charged.)

Colorado’s felony DUI statute is ambiguous on the important “instructions” to a trial judge as to whether the fact of prior convictions constitutes a sentence enhancer or is a substantive element of the offense. The Linnebur court then was bound to look deeper into the history of the creation of the law in the Colorado General Assembly.

The dissent in Linnebur states that Colorado’s DUI Law, Section 42-4-1301, was intended to treat a repeat offender’s prior convictions as a sentence enhancer and not an element of a separate felony offense.

Here is the law:

Section 42-4-1301 (driving under the influence) provides in relevant part:

…but it is a class 4 felony if the violation occurred after three or more prior convictions, arising out of separate and distinct criminal episodes, for DUI, DUI per se, or DWAI; vehicular homicide…; vehicular assault…; or any combination thereof.

The Court held that their interpretation of the above law – the statutory provisions that define and provide penalties for felony DUI:

treat the fact of prior convictions as an element of the crime, which must be proved to the jury beyond a reasonable doubt, not as a sentence enhancer, which a judge may find by a preponderance of the evidence.

The Court found that the portion of section 42-4-1301, that elevates a misdemeanor to a class four felony for driving under the influence (“DUI”), driving while ability impaired (“DWAI”), or DUI per se, after three or more prior convictions for certain enumerated offenses is not a sentence enhancer but an element of the offense for purposes of determining whether jury findings are required.

In interpreting the law, specifically the language and structure of the felony DUI statute, the Court held that the state legislature could have made clear and were free to structure the law so that evidence of the prior convictions were intended as sentence enhancers. They did not draft the law that way.

The Colorado Supreme Court  in Linnebur reached the correct decision to protect the rights of the accused. As noted above, whether a prior conviction constitutes an essential element of a crime depends upon the offense charged. When the prior conviction “elevates” the offense of the criminal charge, such as in this case, transforming a traffic misdemeanor into a felony offense, the conviction not only increases the potential punishment; it changes the impact of the new crime on the person’s life – forever.

The label of “convicted felon” has far more collateral consequences than a misdemeanor DUI conviction.

Furthermore, a defendant charged with a felony under Colorado law has far more protections than a person charged with a misdemeanor. Among those protections are, for example, is the right to a preliminary hearing under section 16-5-301(1)(a), if the accused is in custody.

A person charged with a felony is also entitled to be tried by a twelve-person jury and not a six person jury as in the case of a misdemeanor.

When the Colorado State Legislature created the felony DUI law in 2015, they had the opportunity to study the felony DUI laws in many other states. The structure they chose had to have been intentional and if there was any ambiguity in the creation of the law, that ambiguity should, and now does, weigh in the favor of the protection of, the accused.

If a jury has a reasonable doubt as to the validity of one or more of the prior DUI – DWAI convictions, that doubt now inures to the benefit of the Defendant and may mean the difference between a felony conviction and the penalties that follow and a DUI.

After Linnebur, Colorado prosecutors must prove, beyond a reasonable doubt, that the defendant committed a DUI in the instance at hand, but also that he or she did so in at least three prior instances to convict that person of the felony DUI.