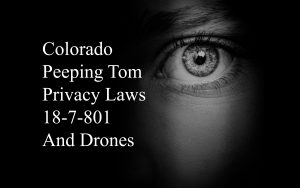 With the increasing popularity and availability of commercial drones – the dangers of invasion of privacy charges have escalated exponentially – as a recent couple in Utah just learned.

A Utah man and his girlfriend were recently arrested on voyeurism charges for flying a drone and taping people in their homes.

While I have written about the subject of Colorado’s Invasion of Privacy laws before – it the drone “spin” that adds a new component.

– any person who knowingly observes or takes a photograph of another person’s intimate parts without that person’s consent, and in a situation where the person photographed has a reasonable expectation of privacy, commits criminal invasion of privacy.

When the District Attorney believes he has enough evidence to charge invasion of privacy for “sexual gratification” – the following enhanced law – 18-3-405.6 – may apply:

To prove the crime of Invasion of Privacy for Sexual Gratification is more difficult than it might first appear. The State has to prove, beyond a reasonable doubt, that the Defendant’s intent, in the context of the intrusion, was to receive sexual gratification.

While the District Attorney may try to prove the enhanced charge – it is tough to prove circumstantially (without a confession) that a person’s intent was sexual and not just mischievous.

The Drone And The Colorado Crime Of Eavesdropping 18-9-304

One last point. Using a drone to listen in on the conversations of others may also be charged as a criminal act. This crime is called eavesdropping – and here is a LINK to an article I have written about the law.

ABOUT THE AUTHOR: H. Michael Steinberg – Email The Author at hmsteinberg@hotmail.com – A Denver Colorado Criminal Defense Lawyer – or call his office at 303-627-7777 during business hours – or call his cell if you cannot wait and need his immediate assistance – please call 720-220-2277.