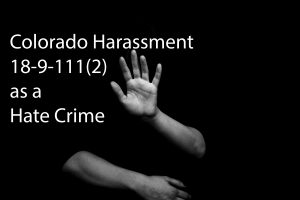 Introduction – Harassment as a Hate Crime

In 2017 Colorado amended the crime of harassment by adding a “hate crime” section, which, upon conviction, enhances the penalty from a misdemeanor 3 to a misdemeanor 1 escalating the possible punishment of a maximum of six months to a maximum of 18 months. 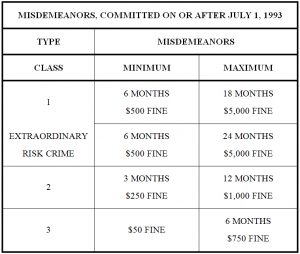 This new addition to Colorado’s list of bias-motivated crimes prohibits the intimidation or harassment of another person because of that person’s actual or perceived:

This section of Colorado’s harassment statute 18-9-111(2) makes harassment a class 1 misdemeanor only if the accused commits the crime of harassment with a specific intent to intimidate or harass another person based on one or more of the criteria listed above.

In Colorado’s primary bias motivated crime law, Section 18-9-121, the Colorado state legislature has made clear that it will punish more harshly crimes committed on a hate motivated basis.

(1) The general assembly hereby finds and declares that it is the right of every person, regardless of race, color, ancestry, religion, national origin, physical or mental disability, or sexual orientation to be secure and protected from fear, intimidation, harassment, and physical harm

Section 1 of 18-9-111provides for seven (7) different ways to commit the crime of harassment in Colorado. What follows is a reprint of the law:

(1) A person commits harassment if, with intent to harass, annoy, or alarm another person, he or she:

(a) Strikes, shoves, kicks, or otherwise touches a person or subjects him to physical contact; or

(b) In a public place directs obscene language or makes an obscene gesture to or at another person; or

(c) Follows a person in or about a public place; or

(g) Makes repeated communications at inconvenient hours that invade the privacy of another and interfere in the use and enjoyment of another’s home or private residence or other private property; or

(h) Repeatedly insults, taunts, challenges, or makes communications in offensively coarse language to, another in a manner likely to provoke a violent or disorderly response.

(2) Harassment pursuant to subsection (1) of this section is a class 3 misdemeanor; except that harassment is a class 1 misdemeanor if the offender commits harassment pursuant to subsection (1) of this section with the intent to intimidate or harass another person because of that person’s actual or perceived race; color; religion; ancestry; national origin; physical or mental disability, as defined in section 18-9-121 (5)(a); or sexual orientation, as defined in section 18-9-121 (5)(b).

(3) Any act prohibited by paragraph (e) of subsection (1) of this section may be deemed to have occurred or to have been committed at the place at which the telephone call, electronic mail, or other electronic communication was either made or received.

(8) This section is not intended to infringe upon any right guaranteed to any person by the first amendment to the United States constitution or to prevent the expression of any religious, political, or philosophical views.

“Sexual orientation” is further defined as: a person’s actual or perceived orientation toward heterosexuality, homosexuality, bisexuality, or transgender status.

“Person with a disability” is further defined as any person who is
[impaired because of [the [loss] [permanent loss of use] of:

The procedure followed at a harassment – bias motivated crime jury trial is a bi-bifurcated process. The law requires that the jury to first find there actually was an act of harassment before even considering their second charge – was the crime a hate crime?

If the jury unanimously convicts on the underlying crime  of harassment – they must then answer the following question posed as an interrogatory in the Colorado jury instructions:

If you find the defendant not guilty of harassment, you should disregard this instruction and fill out the verdict form reflecting your not guilty verdict.

Did the defendant commit the harassment with prohibited bias? (Answer “Yes” or “No”)

The defendant committed the harassment with prohibited bias only if:

He [she] committed the harassment with the intent to intimidate or harass another person because of that person’s actual or perceived race, color, religion, ancestry, national origin, physical or mental disability, or sexual orientation.

The prosecution has the burden to prove the numbered condition beyond a reasonable doubt.

After considering all the evidence, if you decide the prosecution has met this burden, you should mark “Yes” in the appropriate place, and have the foreperson sign the designated line of the verdict form.

After considering all the evidence, if you decide the prosecution has failed to meet this this burden, you should mark “No” in the appropriate place, and have the foreperson sign the designated line of the verdict form.

If a person is accused of committing harassment as a hate or bias motivated crime – the element of specific intent must be proven, along with all of the elements of the crime of harassment…. beyond a reasonable doubt.

That means that the District Attorney prosecuting the case must prove that the accused not only committed the crime of harassment, but also that he or she committed the crime with a specific focus -a specific intent – the precise mental state necessary to prove the person was harassed, at least in part, “because of that person’s actual or perceived race; color; religion; ancestry; national origin; physical or mental disability…”

The Construction of a Colorado Crime

Colorado law defines all crimes as having two main parts – the “actus reus” and the “mens rea“.

The actus reus  (Latin of course) is the ACT of the crime – physically doing something – such as harassing a victim, or it may also be refraining from doing a thing you are required to do – such as caring for your child.

An “Act” means a bodily movement, and includes words and possession of property.

“Conduct” means an act or omission and its accompanying state of mind or, where relevant, a series of acts or omissions. An omission” means a failure to perform an act as to which a duty of performance is imposed by law.

A “Voluntary act” means an act performed consciously as a result of effort or determination, and includes the possession of property if the actor was aware of his physical possession or control thereof for a sufficient period to have been able to terminate it.

The “mens rea” is the requisite mental element of the crime.

The four basic culpable mental states under Colorado criminal law are the commission of a crime with the mental state of:

Intentionally, or with Intent, or
Knowingly, or Willfully, or
Recklessly, or
With Criminal Negligence.

“Recklessly” – A person acts recklessly when he consciously disregards a substantial and unjustifiable risk that a result will occur or that a circumstance exists.

“Criminal negligence” – A person acts with criminal negligence when, through a gross deviation from the standard of care that a reasonable person would exercise, he fails to perceive a substantial and unjustifiable risk that a result will occur or that a circumstance exists.

Specific intent means that at the time of the commission of the crime you not only know you were committing an unlawful act, but that you performed that act with the highest mental state that exists under the law – you acted with premeditation.

In the context of a hate crime – this adds a significant element of proof.. somehow proving a subjective intent to commit that crime – in this case –  the act of harassment under 18-9-111 was committed, at least in part, because of the victim’s “actual or perceived race; color; religion; ancestry; national origin; physical or mental disability, as defined in section 18-9-121 (5)(a); or sexual orientation…”.

For comparison purposes, a general intent crime only requires that you had a willingness to perform the criminal act. There is no requirement that the State also prove a specific motivation or purpose for the commission of the crime.

When a criminal charge contains the mental state of specific intent, the District Attorney must prove that you had the intent to commit the crime, and the intent to achieve the result of the crime.

In this context that means that the act of harassment was directed to the alleged victim because of that person’s actual or perceived race; color; religion; ancestry; national origin; physical or mental disability….

The hate crime “enhancer” adds a new element to the foundational elements of the crime of harassment. To escalate the crime to the M-1 level, there must be proof beyond a reasonable doubt that the person accused had the requisite mental state specific intent to harm that person based on, for example, their race or national origin.

If you found any information I have provided on this web page article helpful please share with others over social media so they may also find it. Thank you.