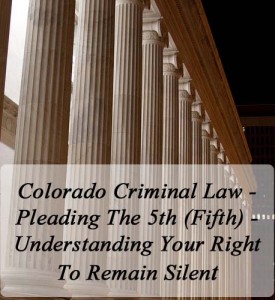 Colorado Criminal Law – Pleading The 5th (Fifth) – Understanding Your Right To Remain Silent – “Pleading the Fifth” seems like a line out of an old Jimmy Cagney gangster movie – but in actuality it is – in my opinion – the single most important civil right asserted in the criminal justice system.

The right is simple on its face but much tougher to apply in different contexts:

“No person shall be compelled in any criminal case to be a witness against himself.”

The right to remain silent under the Fifth Amendment to the United States Constitution provides a blanket shield giving you the right to say nothing that might incriminate you or that may in any way link you to a crime that’s been committed.

Stated another way, this important right means you are free to refuse to answer any questions that might in some way incriminate you or that could lead to evidence that could be used in an investigation of criminal charges. Obviously it would also be a major mistake to volunteer any information that could be used similarly.

The right to remain silent is also commonly referred to the right against self-incrimination.

Pleading “the Fifth,” means the freedom not to condemn yourself with your own words.

This is a right – although it is often referred to as a “privilege.”

The Right to Remain Silent – To Plead “The Fifth”

The right to remain silent – a right we hold sacred as American citizens – is well rooted in our country’s history. The United States Supreme Court paid honor to that right in the earliest decisions issued by the Court (1892):

On the other hand – if a Defendant chooses to take the stand in his trial, he has thereby “waived” his right against self-incrimination and is required to answer ALL questions like any other witness.

Once waived, the right disappears for that trial or hearing.

The Right Of The Witness To Take The Fifth

Witnesses who have been subpoenaed to testify at trial may also “plead the Fifth” and refuse to answer certain questions if they believe the answers might incriminate them. A subpoena cannot deny a witness the right to plead the Fifth.

Relying on my rights under the Fifth Amendment to the Colorado and United States Constitution, I respectfully refuse to answer on the ground that the answer may tend to incriminate me.

“I refuse to answer on the ground of the Fifth Amendment…”

A “blanket refusal” that is accorded to the accused under the Fifth Amendment is not available to the witness. Simply, witnesses cannot refuse to answer “non-incriminating” questions. To do otherwise, exposes the witness to criminal contempt of court.