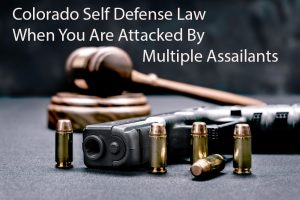 Introduction – Self Defense and Multiple Attackers

Understanding Colorado’s self defense system of laws requires first an understanding the basic  foundational concepts written into the framework of statutes and then focusing on the factual scenario for raising the defense that arises in the given criminal case at issue.

While the one-on-one fight is the most common of these factual scenarios, attacks come in all forms and therefore defending against a group of attackers the ”multiple assailants” case presents a more complex set of facts and the legal issues are equally complex.

This article, and others I have written on multiple assailants, and the Colorado law of mutual combat and the duty to retreat, well establish that Colorado self defense laws are in almost constant flux.

To understand the nature of the defense of self defense the best place to start is to look at the law as it is handed to the jury at the end of a trial when self defense has been successfully raised by a Defendant accused of a violent crime –  a crime such as assault.

Here is the stock jury instruction of law:

The evidence presented in this case has raised the affirmative defense of “defense of person,” as a defense to (assault).

The defendant was legally authorized to use physical force upon another person without first retreating if:

1. He used that physical force in order to defend himself or a third person from what he reasonably believed to be the use or imminent use of unlawful physical force by that other person and

2. He used a degree of force which he reasonably believed to be necessary for that purpose.

[Several exceptions then can be asserted by the District Attorney to “defeat” the successful use of self defense as an affirmative defense – those are:]

The Absence of Provocation

He did not, with intent to cause bodily injury or death to another person, provoke the use of unlawful physical force by that other person.

The Defendant Was NOT The “Initial Aggressor”

This Was Not “Combat by Agreement”

The physical force involved was not the product of an unauthorized combat by agreement.

A person may use deadly force only if “he reasonably believes a lesser degree of force is inadequate” and he “has reasonable ground to believe, and does believe, that he or another person is in imminent danger of being killed or of receiving great bodily injury.” § 18-1-704(2)(a).

Self Defense Is An Affirmative Defense

Colorado juries are instructed that:

In that event, your verdict concerning the charge of assault must depend upon your determination whether the prosecution has met its burden of proof with respect to the remaining elements of that offense..

Without a successfully asserted “justification defense” or other defense such as “choice of evils” defense a Defendant’s actions are almost always crime.

A Defendant need only present “some evidence” on the issue to be entitled to a self-defense.

“The small quantum of evidence needed may come from any source, even from the prosecution. If there is any evidence — including circumstantial evidence — in the record to support the theory that a defendant acted in self-defense, the defendant is entitled to such an instruction. “

The jury, not the judge, to decide whether the defendant acted in self-defense.

“Once the defendant offers a scintilla of evidence of self-defense, and the prosecution has offered evidence to support any exception to self-defense the jury should be provided with the self-defense instruction, including the . . . exception, and be permitted to weigh the evidence to decide whether self-defense has been disproved.”

In every Colorado jury trial the Trial Judge has the duty to properly instruct the jury on the law that applies to the facts presented during the trial.

It is my opinion that the regular or “stock” instruction (above) in Colorado self defense cases does not go far enough in advising a jury of the unique nature of defending against multiple attackers – it does not adequately instruct a jury to consider the totality of the circumstances in a multiple assailant fact pattern.

The Nature of Self Defense When There Are Multiple Attackers

Why then are cases involving multiple attackers so challenging? When a Defendant asserts self defense the jury is tasked to confront and understand the actual threat to the accused under “the totality of circumstances” in play in that individual’s case.

There is no bright line test but it is clear that when there is a disparity of force lawfully using force in an act of self-defense must be “reasonably proportionate.” Criminal jury trials involving the use force in self-defense – require a close analysis of the use of force in the context of the factors at play in the moment of threat to the Defendant’s personal safety.

The use of force decision is placed into a kind of “continuum” a range of levels of that is based upon proportionality. A person claiming the protection of self defense must reasonably respond to the disparity of force the attacker – or attackers present.

The Arrogance Of Hindsight

The job of the experienced Colorado criminal defense lawyer is to understand first that the people judging your client – the jury – will not experience the actual stress the Defendant felt while he or she was under attack. The prosecutor has the benefit of the “arrogance of hindsight” having access to after-the-fact information the Defendant did not have at the time of the attack.

During the trial difficult, almost impossible, choices made in the moment are examined under an often unfair and unjust microscope. When multiple attackers are involved the case facts increase exponentially in complexity.

The disparity of force faced by the Defendant in a given case – the force or threat faced by the person attacked then and there raises the core issue of self-defense law – the use of reasonable force under the circumstances.

The size and strength of the threat is then at the core of that core – the disparity of force in that instance.

When confronted by the single unarmed attacker the defender has the option of waiting for that person to initiate the attack before defending and the law actually requires that approach in most instances.

Against multiple attackers, the option of waiting for the attack may not be possible and the defender may, based on “apparent necessity” – strike first. Self-defense is viewed from the perspective of the defender, from the point-of-view of the Defendant and judged as compared to the actions of a reasonable person in that person’s shoes.

The Doctrine Of Apparent Necessity

Juries are instructed that they are to consider the Defendant’s “reasonable belief” of use or imminent use of force.

The trier of fact in a self-defense case involving multiple assailants must consider the “totality of circumstances,” including the number of persons reasonably appearing to be threatening the
accused, . . . in evaluating the reasonableness of the accused’s belief in the necessity of defensive action and the reasonableness of force used by him to repel the apparent danger.

Put a little differently – a defendant has a constitutional right to have:

“a lucid, accurate and comprehensive statement by the court to the jury of the law on the subject of self-defense from his standpoint, upon the supposition that the jury might believe … his testimony, and that of his witnesses….

It is fundamental that the law of self-defense, which is emphatically a law of necessity, involves the question of one’s right to act upon appearances, even though such appearances may prove to have been deceptive; also the question of whether the danger is actual or only apparent, and as well the fact that actual danger is not necessary, in order to justify one in acting in self-defense.

Apparent necessity, if well grounded and of such a character as to appeal to a reasonable person, under like conditions and circumstances, as being sufficient to require action, justifies the application of the doctrine of self-defense to the same extent as actual or real necessity.

If you found any of the information I have provided on this web page article helpful please click my Plus+1 or the Share buttons for Twitter and Facebook below so that others may also find it.

The reader is alerted to the fact that Colorado criminal law, like criminal law in every state and at the Federal level, changes constantly. The article appearing above was accurate at the time it was drafted but it cannot account for changes occurring after it was uploaded.

If, after reading this article, you have questions about your case and would like to consider retaining our law firm, we invite you to contact us at the Steinberg Colorado Criminal Defense Law Firm – 303-627-7777.

Never stop fighting – never stop believing in yourself and your right to due process of law. You will not be alone in court, H. Michael will be at your side every step of the way – advocating for justice and the best possible result in your case. H. Michael Steinberg is passionate about criminal defense. His extensive knowledge and experience of Colorado Criminal Law gives him the edge you need to properly handle your case

ABOUT THE AUTHOR: H. Michael Steinberg – Email The Author at: hmsteinberg@hotmail.com

“A good criminal defense lawyer is someone who devotes themselves to their client’s case from beginning to end, always realizing that this case is the most important thing in that client’s life.”

Putting More than 40 Years of Colorado Criminal Defense Experience to Work for You.

You should be careful to make a responsible choice in selecting a Colorado Criminal Defense Lawyer. We encourage you to “vet” our firm. Over the last 40 years – by focusing ONLY on Colorado criminal law – H. Michael has had the necessary time to commit to the task of constantly updating himself on nearly every area of criminal law, to include Colorado criminal law and procedure and trial and courtroom practice.

H. Michael works hard to get his clients the best possible results in and out of the courtroom. He has written, and continues to write, extensively on Colorado criminal law and he hopes this article helps you in some small way.