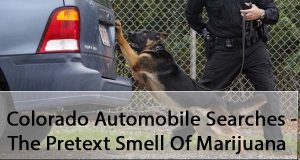 Colorado Automobile Searches – The Pretext Smell Of Marijuana –When the police make a routine traffic stop a vehicle and they want to search that car – they may – and often do – say that they smell marijuana. Later when the car is searched – no marijuana is found. This article addresses that issue.

Can Colorado Police Search Your Car Based SOLELY On The Alleged Odor Of Marijuana?

The answer is NO.

The use of the alleged smell of marijuana without much more – is not justification to conduct a warrantless searches of a vehicle, a home or a business.

On the other hand – the Colorado Supreme Court recently (2016) held that notwithstanding the legality of possessing and using marijuana – the “odor of marijuana… can contribute to a probable cause determination.”

Foundational Constitutional Law In The Area Of Warrantless Searches Of Vehicles

The Fourth Amendment of both the United States and Colorado constitutions (U.S. Const. amend. IV; Colo. Const. art. II, § 7) require Probable Cause before conducting a warrantless search of a vehicle stopped for a traffic matter.

We all have a constitutional right to be free from unreasonable searches and seizures. The constitution mandates that EVERY warrantless search is presumptively unreasonable and therefore unconstitutional ” unless it can supported by probable cause and falls within a narrow list of defined exceptions to the warrant requirement.

One of those narrowly defined exceptions is called , which:

“allows police officers to conduct a warrantless search of an automobile if they have probable cause to believe that the automobile contains evidence of a crime.”

Colorado law permits the police to search an automobile and the containers within it where they have probable cause to believe contraband or evidence is contained.

What Then Is Probable Cause?

A police officer has probable cause to conduct a search when:

“the facts available to [the officer] would warrant a [person] of reasonable caution in the belief’ that contraband or evidence of a crime is present.”

The remedy for a finding that evidence has been illegally seized is the suppression of the evidence obtained under what is generally known as the “exclusionary rule.”

To make a finding as to whether probable cause exists, Colorado Trial Judges are required to consider the totality of the circumstances to determine:

“whether a fair probability exists that a search of a particular place will reveal contraband or evidence of a crime.”

Probable cause is not about “mathematical certainties” – rather probable cause is “based on the factual and practical considerations of everyday life on which reasonable and prudent people, not legal technicians, act.”

The for probable cause takes into consideration any and all facts that a reasonable person would consider relevant to a police officer’s belief that contraband or evidence of a crime is present.

In filing a Motion to Suppress the warrantless search of an automobile stopped for alleged traffic violations, an experienced Colorado criminal defense lawyer may assert the following arguments:

1. There was no reasonable suspicion to stop the vehicle in the first place,

2. The prolonged detention beyond the basis for the traffic matter was unlawful, and

3. The warrantless search of the vehicle was not supported by probable cause.

The Impact Of The “Totality Of The Circumstances” Test

As noted above, when Colorado Trial Judges test the validity of a police officer’s assertion that the officer had probable cause to search – that Judge is required to use the “totality of the circumstances test” to evaluate the quantum of evidence arising from the investigation and whether that quantum supports probable cause.

While the odor of marijuana, even in Colorado, cannot be the sole basis for a finding of probable cause – Zuniga now holds – notwithstanding the fact that marijuana is now legal to consume in Colorado after Amendment 64, that the odor CAN contribute to probable cause under totality of the circumstances test.

A so called “drug dog” that “alerts” on the odor of marijuana cannot does not alert based on quantity and therefore is actually alerting on potentially BOTH illegal substances and legal substances. While other states have found that factor should exclude the drug dog’s alert as a lawful contribution to the totality of the circumstances, Colorado has chosen to permit it as part of the mix of Colorado’s “all-things-considered approach.”

The Colorado High Court’s reasoning is as follows:

A possible innocent explanation or lawful alternative may add a level of ambiguity to a fact’s probative value in a probable cause determination, but it does not destroy the fact’s usefulness outright and require it to be disregarded.

The Colorado Criminal Courts – after– will treat non-criminal and “legally ambiguous” facts such as the alleged smell of marijuana coming from a traffic stop – in “the mix” that is the standard probable cause analyses in Colorado.

Again – the High Court reasons why this was their conclusion:

The argument that since the smell of marijuana has no more legal significance than the smell of cigarette smoke – is not dispositive of the issue. The Court states that an “innocent justification merely affects a fact’s weight and persuasiveness, not its inclusion in the analysis.”

In making a determination of probable cause the relevant inquiry is not whether particular conduct is ‘innocent’ or ‘guilty,’ but the degree of suspicion that attaches to particular types of non-criminal acts.”

In Colorado, the best strategy to combat the issues raised in include the investigation should include the locating and the interviewing of witnesses that were present in the car – or perhaps nearby – as close to the time of the traffic stop as possible. The best source of that information is the Defendant himself. He or she will know who was present at the time of the stop.

The investigation to locate and interview (and take written statements) should be handled by an investigator if possible – not the defense lawyer and that is because of the need to possibly call that investigator at trial.

The claim of an odor of marijuana by a police officer that is fake – phony – or a “pretext” to somehow justify or “contribute” to a finding of probable cause for a warrantless search of a vehicle – will always come down to the credibility of the police officer or officers involved who are making the claim.

It is clear then – that the “blue wall” of agreement between the officers present must be breached. The following relevant questions must be asked:

How many police officers were present?

How many actually smelled the odor of marijuana?

Did the file their reports contemporaneously?

Did they describe the alleged odor similarly?

Did they read one another’s reports before writing their own or before tesifying?

(and) Most importantly – was ANY marijuana actually found in the vehicle or on the Defendant or others present?

No stone should be left unturned..

The reader is admonished that Colorado criminal law, like criminal law in every state and at the Federal level, changes constantly. The article appearing above was accurate at the time it was drafted but it cannot account for changes occurring after it was uploaded.

If, after reading this article, you have questions about your case and would like to consider retaining our law firm, we invite you to contact us at the Steinberg Colorado Criminal Defense Law Firm – 303-627-7777.

Never stop fighting – never stop believing in yourself and your right to due process of law. You will not be alone in court, H. Michael will be at your side every step of the way – advocating for justice and the best possible result in your case.

ABOUT THE AUTHOR: H. Michael Steinberg – Email The Author at mailto:hmsteinberg@hotmail.com– A Denver Colorado Criminal Defense Lawyer – or call his office at 303-627-7777 during business hours – or call his cell if you cannot wait and need his immediate assistance – 720-220-2277. Attorney H. Michael Steinberg is passionate about criminal defense. His extensive knowledge and experience of Colorado Criminal Law gives him the edge you need to properly handle your case.

“A good criminal defense lawyer is someone who devotes themselves to their client’s case from beginning to end, always realizing that this case is the most important thing in that client’s life.”

You should be careful to make a responsible choice in selecting a Colorado Criminal Defense Lawyer – and we encourage you to “vet” our firm. Over the last 30 plus years – by focusing ONLY on Colorado criminal law – H. Michael has had the necessary time to commit to the task of constantly updating himself on nearly every area of criminal law, to include Colorado criminal law and procedure and trial and courtroom practice. H. Michael works hard to get his clients the best possible results in and out of the courtroom. He has written, and continues to write, extensively on Colorado criminal law and he hopes this article helps you in some small way – Colorado Automobile Searches – The Pretext Smell Of Marijuana.